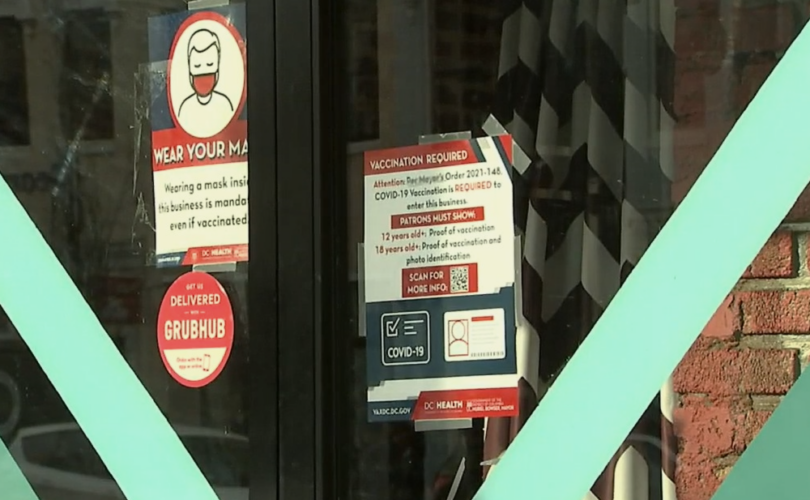 (LifeSiteNews) — A Washington, D.C. sports bar that refused to comply with the city’s vaccine mandate is suing the city’s health department for “unconstitutional emergency acts and orders.”

The Big Board’s lawsuit is based on a previous vaccine mandate forced upon private businesses.

In January, the restaurant’s liquor license was suspended by the city’s Alcoholic Beverage Regulation Administration because the company would not obey Democrat Mayor Muriel Bowser’s mandate that gyms, restaurants, bars, and entertainment venues check the vaccination status of patrons ages 12 or older, as previously reported by LifeSiteNews. The Big Board reopened in April when the mandate was invalidated.

“The repeated extension of emergency orders for months on end, authorized by the D.C. Council’s emergency legislation — which was not approved by Congress — have thwarted Congress’ reserved constitutional power,” the court complaint states. “The penalties levied on The Big Board by DC Health, including the restoration fee paid by The Big Board as a condition on the reinstatement of its license, was therefore unlawful. Plaintiffs thus seek declaratory relief and the return of that fee and other any other costs or fees assessed by DC Health as a result of the mayor’s orders.”

The document explains that Bowser mandated masks indoors and required proof of vaccination to enter bars and restaurants, among other locations. The “emergency orders” were issued in 2021 and were set “for an initial 60-day period.” The city’s health department proceeded to “issue a summary suspension of The Big Board’s license and shutter the business in February 2022 for alleged violations” of the orders.

“DC Health’s suspension of The Big Board’s license violated federal law governing the District of Columbia’s authority to pass ordinances and other laws,” the complaint continues. “Specifically, the District of Columbia’s Home Rule Act which … generally requires that legislation enacted by the D.C. Council be submitted to Congress for a 30-day review period, during which Congress may take action to disapprove and invalidate legislation.”

Although there is an “exception to this requirement” only “for emergency legislation,” the maximum length of such emergency orders is 90 days.

According to Robert Alt, president of The Buckeye Institute and the bar owner’s attorney in the case, told Fox News that all D.C. laws must be reviewed by Congress, despite some authority being given to the city through the Home Rule Act. However, the emergency orders were issued repeatedly over two years, exceeding the 90-day limit and breaking the law.

“What you saw here really was them punishing him [the owner] for the fact that he went ahead and said something so incendiary,” Alt said in the interview. “He tweeted that ‘everyone was welcome’ in his restaurant, and for that the full force of the D.C. government came down upon him.”

“It was terrible. It was like having an army come after you of the regulators who … weren’t on my side and they wanted to shut us down,” Eric Flannery, owner of The Big Board, said in the same interview. “What we really are looking for now is making sure that they were following the laws as they were supposed to be following them and we don’t think they were.”

Additionally, Alt pointed out that when the city “rescinded its own requirement” surrounding the vaccine just a few weeks after it was issued, Flannery’s business was not allowed to open for almost two months after the order was invalidated.