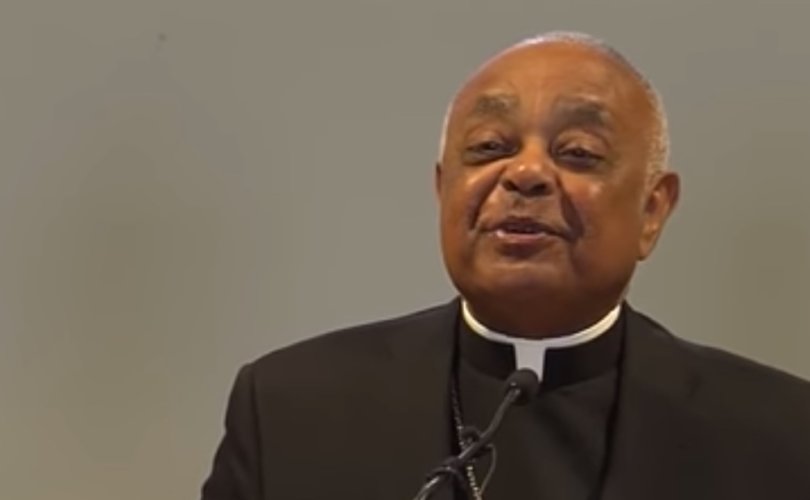 WASHINGTON, D.C., July 28, 2021 (LifeSiteNews) – Hot on the heels of the Pope’s bombshell motu proprio restricting the celebration of the Traditional Latin Mass (TLM), Cardinal Wilton Gregory of the Archdiocese of Washington, D.C., has revoked his permission for an upcoming Pontifical High Mass at the Basilica of the National Shrine of the Immaculate Conception.

The special Mass was planned for August 14, the vigil of the Assumption of the Blessed Virgin Mary, and had already been postponed from the year before, owing to lockdown restrictions, meaning the Mass had originally been planned for a considerable amount of time.

The Mass was to be celebrated by Archbishop Thomas E. Gullickson, a retired American prelate who had served as papal nuncio for almost two decades, having been appointed first to various Caribbean Island nations in 2001, then to the Ukraine in 2011 and, most recently, to Switzerland and Lichtenstein in 2015, eventually having his resignation accepted by the Pope in December 2020.

Rorate Caeli reported that the Paulus Institute, a group dedicated to the traditional Roman Rite of the Church and which organized the event, had made final preparations with the chancery in Washington, including setting up rehearsals for the event and arranging for EWTN to broadcast the liturgy live.

However, in the wake of Pope Francis promulgating Traditionis Custodes, the latest motu proprio in which the TLM is severely restricted, Gregory had ordered that Gullickson submit a formal request to celebrate the Mass using the 1962 missal of John XXIII, despite prior permissions being granted before the motu proprio’s release.

On Tuesday, Gullickson received notice from Gregory informing him that he was denied permission to celebrate the Mass according to the older missal of the Sacred Liturgy due to tensions with the Pope’s instructions regarding the promulgation of the TLM.

“We must write that the Pontifical Solemn Mass in the Traditional Roman Rite may not take place at the Basilica of the National Shrine of the Immaculate Conception on August 14, the Vigil of the Assumption of the Blessed Virgin Mary,” a statement from The Paulus Institute board of directors reads.

Continuing, the group explained that, on Tuesday, “[a] letter from His Eminence Wilton Cardinal Gregory was received by His Excellency Archbishop Gullickson, our intended celebrant. The decision of His Eminence is that the Mass ‘would seem … to be at odds with the restrictions’ of Pope Francis placed upon liturgical celebrations using the 1962 Roman Missal, and is not opportune at this time for permission.”

The directors expressed regret that the ancient Roman Rite will not be permitted to be celebrated at the shrine and defended the patrimony of the usus antiquior. “This is the Mass rooted in Apostolic Tradition, the Mass of saints and sinners, kings, queens and paupers, and doctors and virgins of the Church, and our own ancestors. It is the oldest, most venerable extant anaphora in the Church, East and West, recognizable by the Eastern and Orthodox with their Divine Liturgy.”

“The Shrine is the most appropriate church in the United States for this Mass,” the traditionalist group explained, adding that the national shrine is “not a diocesan church but our national church, and furthermore, the church of our bishops, any of whom may say Mass here without permission.”

“It is moreover the church of all American Catholics, who built this majestic edifice and have a right to this enactment of the essence of our Catholic faith in the lex orandi–lex credendi of our Catholic heritage.”

Though themselves dismayed, The Paulus Institute directors asked the faithful to respond “with controlled reactions of strength, substance, and opposition, without polemics and inflammatory or coarse words, which The Paulus Institute rejects.” Instead, the group insisted that the faithful must pray “for the Roman Catholic Church and her leaders, that they may tend to ALL of their flock, including those who worship at the traditional Latin Mass.”

LifeSiteNews spoke with theologian and liturgical expert Dr. Peter Kwasniewski, who explained that, with the release of Traditionis Custodes, there is no new reason for Gregory to have stepped in to halt the Mass.

“By no stretch of imagination would this pontifical Mass at a national shrine violate any of the requirements of the new motu proprio,” Kwasniewski stated. “The cancellation is therefore rather a demonstration of sycophantic zeal that thinks nothing of marginalizing and dispiriting Catholics for the sake of playing politics.”

Kwasniewski further lamented the late stage at which the Mass has been canceled, complaining that, on a pastoral level, Gregory has exhibited a very poor exercise of judgment.

“By canceling a pontifical Mass to be offered by a retired papal nuncio and archbishop, and doing so only a few weeks before an event for which many had been busy planning and working for the past year, Cardinal Gregory shows a lack of the most elementary courtesy, respect, hospitality, charity, and pastoral sensitivity.”

“It's disgraceful and I think everyone can see that plainly enough,” he said.

Before denying Gullickson this week, Gregory had produced a letter for priests in his archdiocese that granted those who had been celebrating the TLM permission to continue doing so unimpeded while saying he would “prayerfully reflect” on the Pope’s instructions “to ensure we understand fully the Holy Father's intentions and consider carefully how they are realized in the Archdiocese of Washington.”

“In the interim, I hereby grant the faculty to those who celebrate the Mass using the liturgical books issued before 1970 to continue to do so this weekend and in the days to come, until further guidance is forthcoming,” the cardinal’s letter stated.

While restricting the celebration of the Sacred Liturgy according to the pre-1970 missal, Gregory has maintained a position of permission for pro-abortion, pro-homosexual “marriage” U.S. President Joe Biden to receive Holy Communion. The cardinal’s decision to continue distributing the Blessed Sacrament to the president contradicts the Code of Canon Law (can. 915), which states that Catholics who are “obstinately persevering in manifest grave sin are not to be admitted to holy communion.”

Referring to his relationship with Biden, Gregory told the Catholic News Service in November, as he was preparing to be made a cardinal, “I hope it’s a real dialogue, because I think that’s the mantra of Pope Francis — that we should be a church in dialogue, even with those with whom we have some serious disagreements.”

The cardinal noted how Biden had received Communion during his eight years as vice president under President Barack Obama, confirming that he is “not going to veer from that.”

“On my part, it’s a matter of the responsibility that I have as the archbishop to be engaged and to be in dialogue with him, even in those areas where we obviously have some differences,” Gregory said.