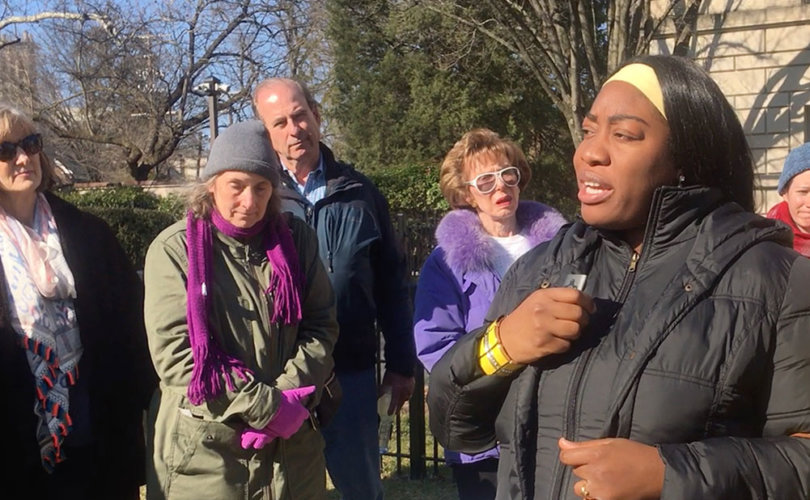 WASHINGTON, D.C., February 18, 2019 (LifeSiteNews) – U.S. Catholics held a prayerful rally in front of the Vatican Ambassador’s residence this weekend to ask for a “worthy shepherd” to be installed as the next Archbishop of Washington and to be allowed to play a role in that selection process.

The Holy See announced that disgraced former Cardinal Theodore McCarrick had been laicized just hours before the rally began, highlighting the sense of urgency — and distress — among the gathered lay people who have experienced a precipitous erosion of trust since last summer’s shocking revelations about McCarrick’s homosexual predation and evidence of Cardinal Wuerl’s obfuscation of the truth about what he knew concerning his predecessor.

“Not only are we hurting as secondary victims of the clergy sex abuse scandal,” declared Winnie Obike, who delivered a heartfelt speech in front of the nunciature, “We are hurting because when we try to reach out to the hierarchy and representatives of the Vatican here in Washington, we are met with a wall of silence.”

Obike, a 29-year-old wife and mother of two with a third child on the way, is co-founder of Catholic Laity for Orthodox Bishops and Reform (aka, Catholic Laity).  She said she was “devastated” after reading the Pennsylvania Grand Jury Report.

Spurred into action by the news, Obike created a Change.org petition to remove Cardinal Wuerl as Archbishop of Washington, launching a large grassroots movement when nearly 150,000 people added their signatures to the cause.

The ultimate goal of the Catholic laity movement is to install a new archbishop of Washington “who will be orthodox,” she explained.  “And by that we mean many things:  pro-life. pro-family, supporting Church doctrine and Church teaching through and through.”

“How devastating for those of us who knew him,” declared Obike, noting that during his time as Archbishop of Washington, McCarrick had presided over countless Masses, confirmations, and other sacraments for so many in the archdiocese. “There’s just a gaping hole in our heart right now,” she added.

“We are doubly without a ‘canopy of grace,’” said Obike during her brief impassioned speech. “When we have spiritual leadership, our shepherds form a ‘canopy’ over our heads. And so now two of our former archbishops are no longer in operation.  One of them has been laicized today and the other is not a functional archbishop.”

“We are tired of having our canopy of grace ripped apart,” said Obike, adding, “We are tired of being attacked by all infernal spirits and all kinds of false ideologies and false doctrines because of the lack of an archbishop here in Washington.”

In the long run, Catholic Laity seeks to establish a permanent means of communicating effectively with the U.S. hierarchy and the Holy See about Catholic life in the United States.

Rally participant Louis Carvallo told LifeSiteNews that he is afraid that the Vatican will curtail further action now that former Cardinal McCarrick has been laicized.

“That’s what this [rally] is about,” said Carvallo. “We can’t allow them to just stop there.”

Bob Foss is also concerned that with the grand gesture of defrocking McCarrick and holding its upcoming world summit on sex abuse, the Holy See might think it has done enough to deal with the problem of homosexual priests and prelates.

“One of the Church’s primary methods of operation, starting with the Pope, is to basically ignore responsible, reasonable requests for dialogue,” said Foss.

“The Pope, for three years since the dubia came out, has simply not responded, and so far, the Church has basically gotten away with it.  So what we are trying to do as laity is … ask our bishops to sit down and talk with us because there are clearly major problems in the Church,” said Foss, noting “the laity are always part and parcel of the proper solutions to problems in the church.”

“McCarrick is the tip of the iceberg,” said Foss. “There are so many problems with homosexuality in the Church and the lack of leadership on the part of our bishops that it’s so far beyond just McCarrick.”

At the conclusion of the rally, Catholic Laity cofounder Donna Bethell attempted to hand deliver the group’s requests in the form of a letter to Papal Nuncio Archbishop Pierre, but no one inside responded to her repeated attempts to summon someone from inside the nunciature to come to the front door to receive it.