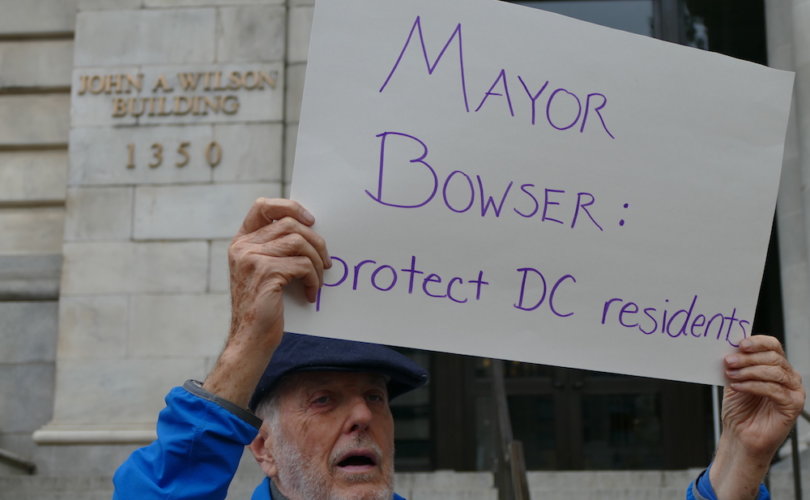 On November 1, the city council voted 11-2 to pass Bill 21-38, the Death With Dignity Act. On November 15, the council approved the bill 11-2 again. The Death with Dignity Act would allow doctors to prescribe lethal drugs to patients who they think have less than six months to live.

The November 1 vote featured a heated discussion of the bill in which numerous pro-assisted suicide members of the city council became choked up describing how they had watched relatives suffer before death. In her arguments in favor of the bill, Councilmember Elissa Silverman recalled how her grandmother had been hooked up to a ventilator.

There was no debate before the November 15 vote. Councilmembers Brianne Nadeau and Yvette Alexander, the same councilmembers who opposed the bill on November 1, voted against it Tuesday.

Pro-life and disability rights advocates have vigorously opposed the bill, which they say unfairly targets minorities, the elderly, and low-income communities.

Bowser's Department of Health Director is on the record opposing assisted suicide.

On Sunday, Rev. Patrick Mahoney of Church on the Hill DC and the Christian Defense Coalition is organizing a prayer vigil in front of Bowser's house to encourage her to vote against the bill.

1
Dr. Robert Malone: Endless mRNA jabs are in the works as the CDC and FDA play ‘hide the data’
2
Open letter to Elizabeth Warren: Why do you campaign so strongly for the murder of the unborn?
3
Residents of Texas city successfully quash pro-LGBT ‘diversity, equity, inclusion’ gov’t proposals
4
REPLAY: LifeSite’s 25th Anniversary Gala
5
Why is Pierre Poilievre silent on the family policies that matter to conservatives?
Subscribe to Daily Headlines »