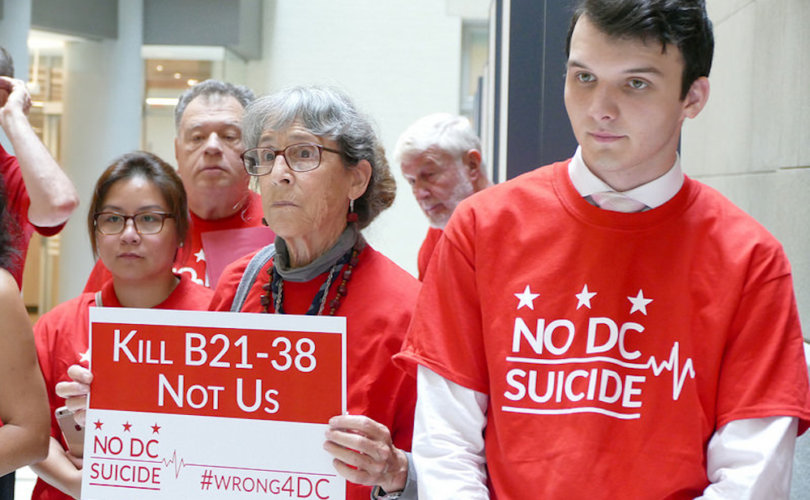 On July 17, the Bowser administration announced it was implementing the law and that the D.C. department of health would begin overseeing the doctor-prescribed death program. Bowser self-identifies as a Catholic.

On July 13, the House Appropriations Committee advanced a measure overturning the law 28-24. Congress may repeal local D.C. laws 30 days after they're passed. Because it's been much longer than that, Rep. Andy Harris, R-MD, proposed an amendment to a budget bill that would nulify the D.C. assisted suicide law.

After the committee accepted the amendment, the pro-assisted suicide group Compassion & Choices sent out a panicked email to supporters.

“Medical aid in dying” and “death with dignity” are euphemisms for assisted suicide and sometimes euthanasia.

“Our opponents succeeded in amending the appropriations bill to stop Washington, D.C. from participating in medical aid in dying,” Compassion & Choices' Manansala wrote on July 14.

The D.C. government's Department of Health website now has a page devoted to educating people on their “right” to obtain lethal drugs with which to commit suicide.

A “Frequently Asked Questions” sheet from the government assures people that they don't have to kill themselves at home or at a doctor's office. It can be done “any other location where the patient has permission to take the end of life medication.” However, “the patient’s estate will be responsible for any costs incurred by the District associated with taking the end of life medication in a public location,” it warns.

If the U.S. House and U.S. Senate pass the bill with Harris' amendment intact, and President Trump signs it, then it will still be a victory for life. Until then, the nation's capital is considering it “care” for doctors to help end their patients' lives.