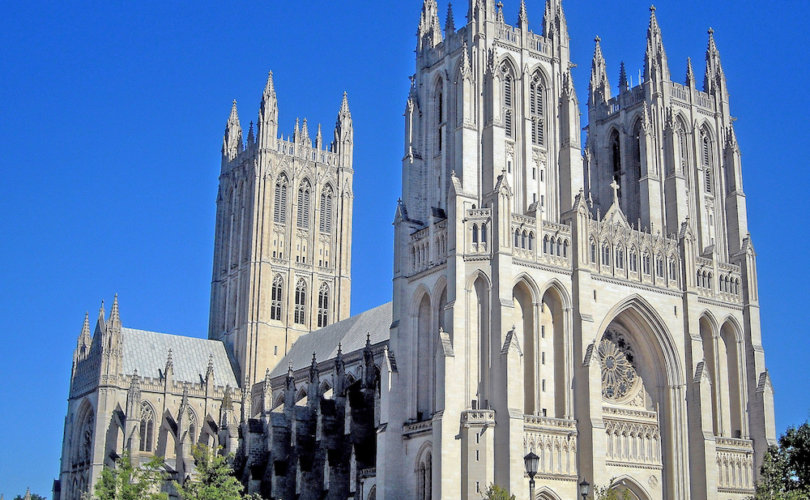 WASHINGTON, D.C., October 11, 2018 (LifeSiteNews) – The Washington National Cathedral in the country’s capital is slated to become an unlikely symbol of homosexual activism following the news that it will be the final resting place of murdered University of Wyoming student Matthew Shepard.

The family of Shepard, a 21-year-old homosexual man brutally beaten to death in 1998, has decided to have his ashes interred in the crypt of the iconic Episcopal cathedral, the Washington Post reported. His parents had previously kept his ashes for fear of drawing unwanted attention to a public grave, but have now settled on the cathedral ahead of his murder’s 20th anniversary on Friday.

In a public service on October 26, his ashes will be placed in the private, off-limits crypt columbarium. One of just 200 to receive such a distinction, Shepard’s remains will join those of distinguished historical figures such as President Woodrow Wilson, Helen Keller, and Navy Adm. George Dewey. The Daily Caller noted that the cathedral’s dean, the Very Rev. Randolph Marshall Hollerith, is responsible for selecting figures of national significance to inter.

The service will be presided over by Bishops Mariann Edgar Budde and Gene Robinson, the latter of whom is an open, “divorced” homosexual.

Robinson, who is friends with Shepard’s parents, suggested Wednesday that pro-LGBT activists turn the cathedral into a pilgrimage destination.

“(We have) the triangle, that reminds of what was used to brand us during the Holocaust, the rainbow flag, and we’ve got Matt Shepard, who became a symbol of how we are targets of violence,” he declared. “This could be a wonderful place for Matt’s ashes to rest, and where people could go and make a kind of pilgrimage (…) I think this could become a destination for LGBTQ people who have known violence in their own lives, which keeps being an issue, despite all the gains we’ve made.”

“For the past 20 years, we have shared Matt’s story with the world. It’s reassuring to know he now will rest in a sacred spot where folks can come to reflect on creating a safer, kinder world,” Shepard’s mother Judy said in support of the idea.

The Post noted that visitors will not be able to directly access the crypt, but the cathedral is considering a special plaque recognizing Shepard, which visitors would be able to see and touch.

On its official website, the Washington National Cathedral purports to “serve as a house of prayer for all people and a spiritual home for the nation,” and act as a “catalyst for spiritual harmony in our nation, reconciliation among faiths, and compassion in the world.” Yet this is the the latest ideological move from the liberal church, which has performed same-sex “marriages” at the cathedral since 2013.

Shepard’s death inspired numerous films, documentaries, and other cultural works, as well as federal “hate crime” legislation. But despite the dominant narrative – epitomized by the Washington Post matter-of-factly stating he “was a victim of one of the nation’s worst anti-gay hate crimes” – questions remain as to what, if any, role Shepard’s sexual attraction played in his murder.

The “anti-gay hate crime” narrative “has persisted to this day, thanks in part to murderer Aaron McKinney’s and his girlfriend’s initial testimony that Matthew Shepard sparked McKinney’s rage by making an advance on him,” the Daily Caller’s Joshua Gill explains.

But “McKinney and his girlfriend later recanted,” he continues, “saying that they lied hoping that it would make McKinney’s actions more sympathetic, when in reality McKinney had simply robbed and beaten Matthew Shepard in a rage after the meth dealer McKinney was planning to rob did not show up.”

Additionally, journalist Stephen Jimenez interviewed several witnesses who claim McKinney was himself either homosexual or bisexual. Jimenez’s dissent from conventional wisdom has made him a target of derision among pro-LGBT advocates.