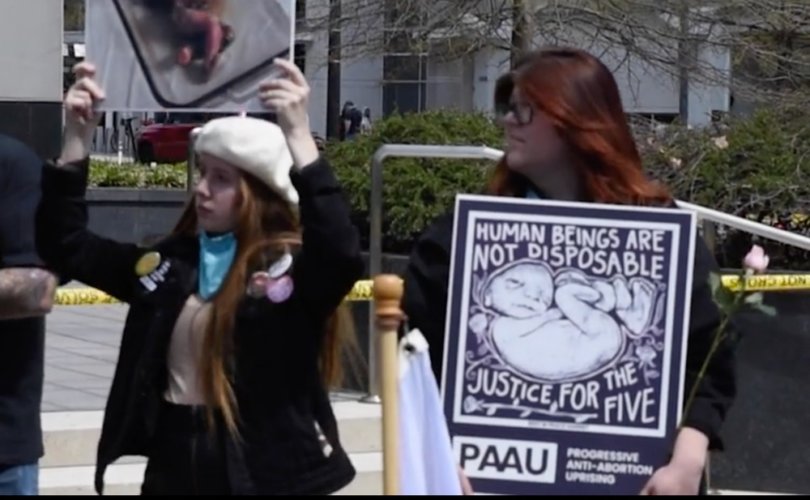 Several pro-life groups collaborated to organize a press conference and rally in front of the building, calling on D.C. Mayor Muriel Bowser and the city’s medical examiner to conduct autopsies of the dead babies, who some experts believe may have been the victims of infanticide after botched abortion attempts.

Washington, D.C. police found the bodies of the babies at pro-life activist Lauren Handy’s apartment, after the FBI raided her home and arrested her last week on charges connected with a “traditional rescue” she conducted with eight other pro-lifers in October 2020.

Handy and fellow pro-lifer Terrisa Bukovinac say they obtained a box containing the bodies from an anonymous truck driver who was allegedly loading boxes from the Washington Surgi Clinic abortion facility to transport them to the Curtis Bay Medical Waste incineration facility. The pro-lifers brought the aborted babies back to Handy’s apartment in order to give them a “proper burial” and funeral.

Meanwhile, despite suggestions the babies may have been killed in violation of federal law, which prohibits abortionists from murdering babies born alive after failed abortions, D.C. authorities have stated they will not launch any investigations or conduct autopsies on the infants since they say the babies were “​​aborted in accordance with D.C. law.”

The pro-lifers shared their reactions to the traumatic images of the murdered infants and explained to LifeSite their reasons for demanding the city take action.

“The photos that came out of this were so heart-wrenching,” said Lauren Marlowe of Students for Life, describing one of the infants, a little girl who was killed with one eye still open.

“Everyone I talk to, all my coworkers, all my friends, everyone cried and cried and cried when they saw these photos. And right now, those bodies are in that building,” said Marlowe, pointing to the medical examiner’s office. “And the D.C. chief medical examiner is refusing to do autopsies for them, and refusing to conduct justice for their citizens. It’s incredibly important that we’re here today and call [for] justice for them.”

Catholic University professor Michael New told LifeSite “this is the first time in a while we’ve really found the remains of aborted children,” and “the first time in a long time we really do have evidence of criminal misconduct on the part of the abortion industry.”

According to New, there is reason to believe that at least one of the babies was the victim of a partial-birth abortion and some may have been killed after they were born, in violation of federal law.

Monica Miller, director of Citizens for a Pro-Life Society, emphasized to LifeSite that “murders were committed.”

According to Miller, beyond the question of whether or not specific laws were broken, it’s a “moral truth” that innocent babies were murdered.

“There’s going to be ultimately a responsibility before God for what happens to innocent unborn children in abortion,” she said.

Handy, who heads up the pro-life group Progressive Anti-Abortion Uprising (PAAU), was also onsite. She told LifeSite it’s “amazing seeing everyone come together in this unified front to demand justice” for the murdered children.

Following the discovery of the infants’ bodies, some GOP lawmakers have demanded that Mayor Bowser and the U.S. Department of Justice investigate the alleged murder of the five babies.