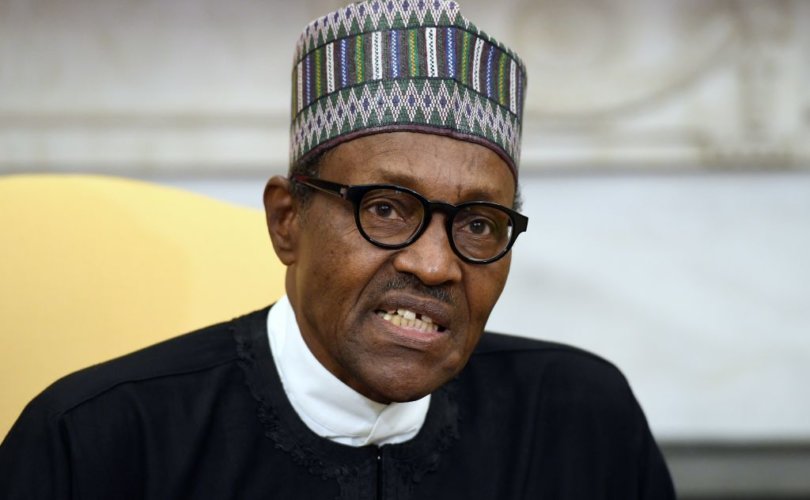 Nigerian President Muhammadu Buhari speaks during a meeting with US President Donald Trump in the Oval Office of the White House on April 30, 2018 in Washington, DC. Olivier Douliery-Pool/Getty Images

WASHINGTON D.C., July 17, 2020 (LifeSiteNews) – A new report from the Family Research Council (FRC) is calling for the U.S. government to adopt hard-hitting sanctions against Nigerian President Muhammadu Buhari in light of reports of more than 1,200 Christians killed by Islamic terrorists in the country since the start of this year.

Lela Gilbert, Senior Fellow for International Religious Freedom at the FRC, has published a new paper titled ‘The Crisis of Christian Persecution in Nigeria’ in which she reviews numerous reports and studies highlighting the targeting of Christians by Boko Haram, the Islamic State’s West Africa Province (ISWAP) and Fulani herdsmen. One recent report cited in the study estimates that 11,000 Christians have been killed in Nigeria since June 2015.

In a recent interview regarding her report, Gilbert says that she believes the true numbers of Christian deaths are in reality far higher.

“We just don't know the exact numbers, because the records are very difficult to keep,” she told FRC’s Tony Perkins.

As one antidote for that Gilbert suggests the deployment by the U.S. government of a “Special Envoy for Nigeria, who would ensure that reports of Christian persecutions are “accurate and are not lost somewhere between the incident sites, the U.S. Embassy in Abuja, and the corridors of power in Washington, D.C.”

Rather, she insists that what is actually occurring is a genocide, as noted by two recently published large reports on Nigeria by the International Committee on Nigeria (ICON) and the UK All-Party Parliamentary Group (APPG) for International Freedom of Religion or Belief.

“The truth is, these jihadis come in in the night,” she told Perkins.

“They sweep through communities. They kill randomly. They kill women. They sometimes kidnap young women. They slaughter people and mutilate them, and then kill the men off and burn the villages…They're not even taking over the villages so they have a new place to live. It's extremely violent and extremely terrible.”

Gilbert says that President Buhari’s membership of the Fulani tribe is seen as “one of the major roadblocks to reform, particularly with regard to the Fulani jihadi massacres” and argues that “[h]ard-hitting sanctions against President Buhari” are “essential” and that the international community should also consider cuts in foreign aid.

“It is past time for both U.K. lawmakers as well as those in the U.S. and Europe to reconsider the ominous threat of another genocide taking place in Africa even now,” she concludes her report.

“All too well we remember Rwanda, where we failed to stop a genocide in which one million were slaughtered. Not too long ago, we finally recognized that a genocide took place in Iraq—several years too late. May this not happen again.”

Nigeria is the 12th worst country in the world for persecution of Christians, according to Open Doors USA’s 2020 World Watch List. In 2018, President Donald Trump promised that his administration would work “very, very hard” to end the mass killing of Christians in Nigeria.