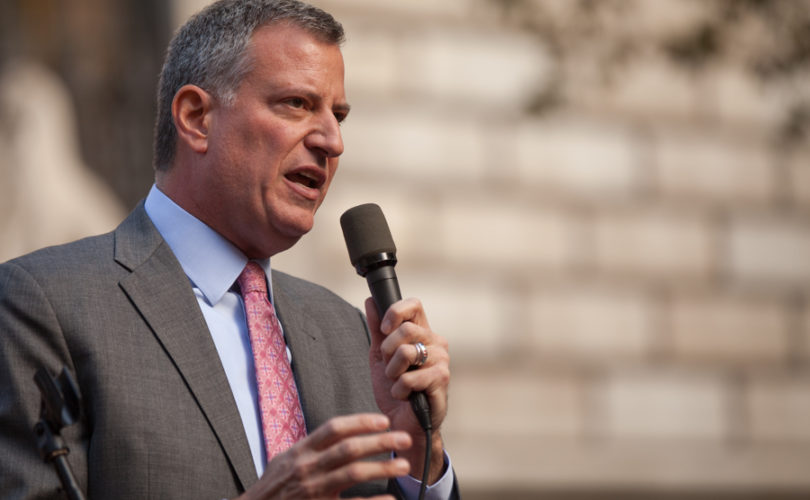 NEW YORK CITY, May 5, 2016 (LifeSiteNews) – As Christian-owned fast-food outlet Chick-fil-A prepares to open an outlet in Queens this fall, New York City’s left-wing Mayor Bill de Blasio has blasted them, while a city councillor is calling for a boycott.

“It is a country in which people have a right to open a business,” de Blasio told reporters. “What the ownership of Chick-fil-A has said is wrong. I’m certainly not going to patronize them and I wouldn’t urge any other New Yorker to patronize them, but they do have a legal right.”

De Blasio is a social “progressive” who backs same-sex “marriage” (officiating at two homosexual ceremonies on the day the Supreme Court legalized the practice) and won election vowing to expand the city’s abortion services. More recently he declared all municipal washrooms open to all genders. After falling last year, his popularity is reportedly resurging.

Atlanta-based Chick-fil-A has been the target of the LGBT rights movement since 2012, when its CEO Dan Cathy told Baptist News he was a supporter of natural marriage and believed that if same-sex “marriage” were legalized both God and America’s founding fathers would be offended.

Politicians in places like Boston, Chicago, and Denver vowed to halt the popular chain’s expansion plans in their communities. But politician and Fox TV personality Mike Huckabee organized a Chick-fil-A Appreciation Day which, despite the company’s disavowal, attracted record sales. After that the company renounced its contributions to lobby groups but Cathy reaffirmed his position on natural marriage. Planned expansions ultimately proceeded.

Though Chick-fil-A already has two Manhattan outlets, the plan for a third to open in the Queens Center Mall drew a harsh response on Monday from Councilman Danny Dromm.  “I am deeply disturbed that Chick-fil-A continues to give 25 percent of their charitable contributions to anti-LGBT organizations, including over $1 million to the Fellowship of Christian Athletes,” stated Dromm. “I hope that the Queens Center mall will reconsider giving a company so deeply involved in anti-gay discrimination a lease on their property. Believers in equality should boycott these purveyors of hate.”

Chick-Fil-A’s spokeperson, Desiree Fulton, said in a statement the next day that the company does not discriminate against LGBT employees or customers and no longer funds lobby groups of any kind. As for the Fellowship of Christian Athletes, all company support for it goes “specifically to provide free summer sports camps for hundreds of young students in urban environments throughout the nation.”