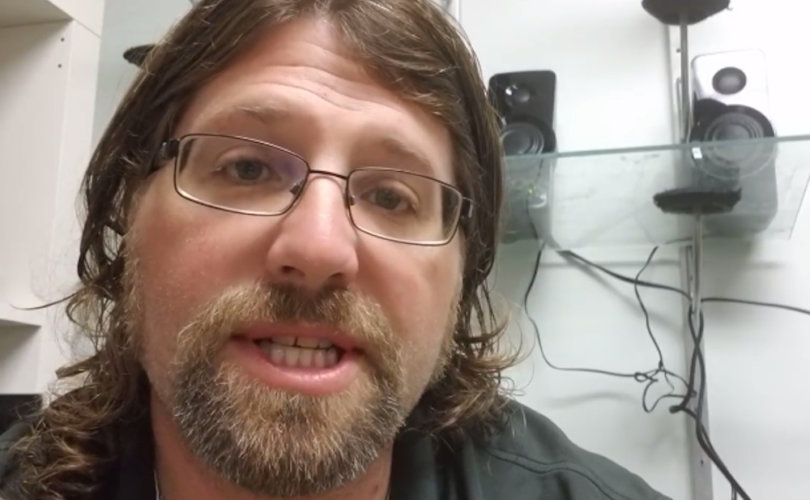 LEXINGTON, Kentucky, November 21, 2018 (LifeSiteNews) – A deacon from the Diocese of Lexington preached favorably about legalized abortion, same-sex “marriage,” and homosexuality the weekend before this month’s midterm elections, saying Christ “was here to teach us how to love, not who to love.”

Jesus “didn’t preach against abortion at all,” according to Deacon Steve Hester.

Hester’s comments came in a homily on the subject of how Jesus would vote.

Hester said he doesn’t know why Jesus didn’t preach against abortion, and he doesn’t believe the Lord “thought killing babies was okay.” There was abortion back then, he said, so it’s not as if the Lord would have been unaware.

“But maybe he didn’t preach against abortion because he knew that safe sex and education rather than legislation are the actual way to reduce abortions,” Hester said. “But he also knew that we wouldn’t end up believing in safe sex or education. So it was a moot point. You’ll have to ask him when you get there.”

After making the dubious claims about Jesus and abortion, Hester continued in the same vein with homosexual “marriage” and activity.

“And he didn’t preach against same-sex marriage or homosexuality either,” Hester said of Christ. “Even though there were LGBT persons back then too.”

“And maybe he didn’t preach against homosexuality because he was here to teach us how to love, not who to love,” Hester said further. “And when he did preach about marriage, it was to stress its permanence, its insolubility. He taught us how to love our partners for life. He didn’t teach us who those partners should be.”

Hester is a Deacon for the Diocese of Lexington assigned to the Historic St. Paul Roman Catholic Church in Lexington.

The homily was posted November 3 on YouTube and by the LGBT-affirming Fortunate Families on the group’s Facebook page, and reported on by Joseph Sciambra, a Catholic advocate for same-sex attracted individuals.

Fortunate Families advocates for the “development of Church teaching on the topic of homosexuality and gender,” and for the Church to acknowledge same-sex relationships, and supports same-sex “marriage.” According to its information, Fortunate Families consists of “Catholic families celebrating our LGBT children.”

Lexington Bishop John Stowe is an “Ecclesial Adviser” for the group.

LifeSiteNews inquired with the Diocese of Lexington but did not receive a response about how both the deacon’s problematic comments and Bishop Stowe’s involvement with Fortunate Families reconcile with Catholic teaching.

Hester also proceeded to say in his homily that the way Jesus would vote could be surmised from the things he did talk about, hence certain other issues – besides abortion, gay “marriage” and homosexuality – are voting priorities.

“The things that Jesus talked about,” Hester said, “immigration, health care, the poor, war and peace, and the ways he always preached about love tells us a lot about how he would probably vote.”

Aside from involvement in Fortunate Families, Stowe is also one of four U.S. bishops to endorse LGBT activist Father James Martin’s book taken from the priest’s November 2016 acceptance speech for an award from pro-homosexual group New Ways Ministry.

Stowe spoke in April 2017 for the dissident New Ways, which has twice been condemned by leaders of the United States Conference of Catholic Bishops and its founders censured by the Vatican, which “permanently prohibited” them “from any pastoral work involving homosexual persons,” after ruling that their teaching was “erroneous and dangerous” and “doctrinally unacceptable.”

In defending the speaking engagement, Stowe said, “Pope Francis has signaled that we need to take another look at those things (homosexuality) … ”

Asked in an interview if the Church will ever change its teaching on homosexuality, Stowe said, “change does come over a long period of time in the way that the Church approaches a number of issues.”