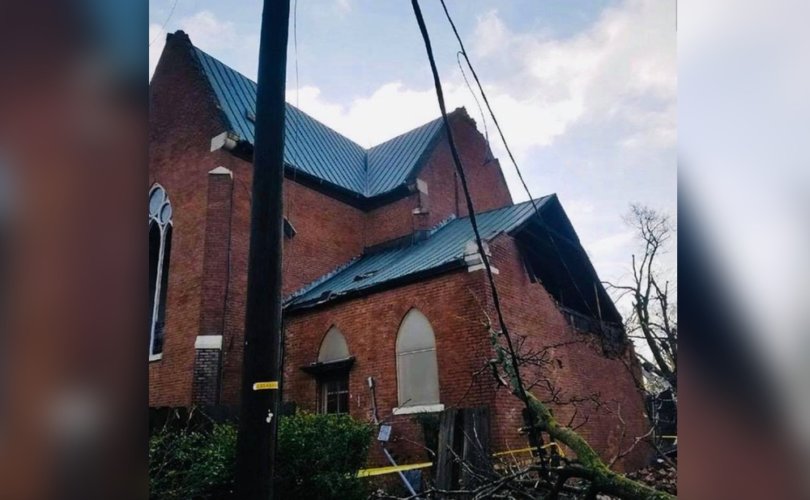 According to Aleteia, Fr. S. Bede Price of the Church of the Assumption was awoken by his frantic cat early on Tuesday morning, heard an explosion, went outside to investigate, and narrowly missed being hit by his own rectory chimney.

“I was probably still half asleep and thought a plane had crashed,” Fr. Price told an interviewer yesterday.

“So I went out the front door, and the chimney slid off the roof and missed me by about 25 feet, which scared me to death.”

The National Catholic Register (NCR) reported that the tornado itself, which cut through the Germantown district at about 1:00 a.m., had passed only 100 yards away from the church. It destroyed the north transept and sacristy and badly damaged the steeple and roof.

Despite the dark, the possibility of more tornadoes, and the danger of the bell tower falling through the roof, Price went inside the church to rescue the Blessed Sacrament reserved in the tabernacle.

“Father was worried that the church might collapse, and so he removed the Blessed Sacrament,” a spokesperson for the Church of the Assumption told LifeSiteNews.

“The church was a mess [and] looked like it had been hit by a bomb.”

Price told Aleteia that glass was broken, pews were upturned, and that “vestments had blown all over the place.”

Our lady of Assumption Prayer: Father in heaven, all creation rightly gives you praise, for all life and holiness come from you. In the plan of your wisdom she bore the Christ in her womb was raised body and soul in glory to be with him in heaven. May we follow her example in reflecting your holiness and join in her hymn of endless love and praise. We ask this through Jesus Christ our Lord. Amen. . . Hi all! We will try our best to update you all on the status of Assumption. We ask you to not call or email the parish office as they are bombarded with urgent matters. Instead please pray for Fr. Price and all those having to figure out what is next. We are still unsure of the exact damage but here are some pictures so far. Praise God Father Price was able to safely remove Jesus from the tabernacle even during a violent tornado. Let us remain hopeful for Jesus always rises again. Pax Christi.

“By that time it was all over. The whole thing must have taken all of 30 seconds. My neighbor was there, and people started to come out and look around. It was almost like we were in a movie. We have a lot of old trees, which were torn up by the roots. Power lines were down.”

Built in 1859, the Church of the Assumption is the second-oldest church in Tennessee. It is also the Diocese of Nashville’s “designated church” for the Extraordinary Form of the Mass, which is also known as the Traditional Latin Mass or TLM. While repairs are made to the building, the TLM will be celebrated in the Methodist Church across the street.

Parishioner Charlie Smith told Aleteia that the Church of the Assumption is dear to Catholics who love traditional worship.

“Assumption has been the center of the traditional Catholic community in Nashville,” he said.

“It means a lot to a lot of people. We’re hoping that it can be rebuilt, which I believe it can be, but it will be a long time before it will be back to the sort of grandeur it had before.”

The church is also home to a smaller Syro-Malabar community.

The spokesperson for the parish told LifeSiteNews that the south wall of the church or the roof is still moving and that “any prayers for the structure of the church would be appreciated.”

The tornado that damaged the Church of the Assumption was one of a number of twisters that formed the weather system that terrorized central Tennessee on March 3. Twenty-four people were killed, and at least 22 were taken to hospital with injuries. The dead include five children, and more than 20 people are missing. According to Fox12 Tennessee, most people who died were in Putnam County, which is 80 miles east of Nashville.

According to the Diocese of Tennessee, none of its employees were hurt by the tornadoes.

President Donald Trump is expected to visit the area on Friday.

Donations for the repair of the historic church can be made here.