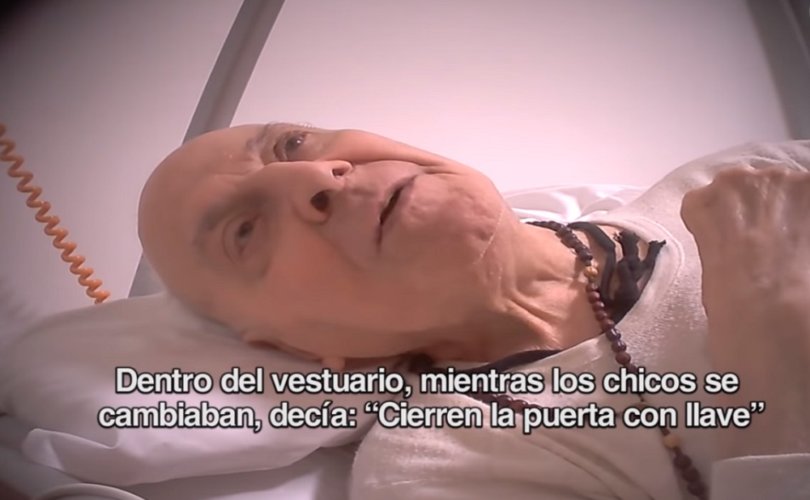 Video capturing a confession of the horrifying abuse that took place at the Instituto Próvolo in Argentina and Italy.Fanpage.it / YouTube

MENDOZA, Argentina, August 14, 2019 (LifeSiteNews) — The trial of two priests and a layman accused of serial sexual abuse of impoverished deaf boys and girls in their care began in a courtroom in Argentina, where dozens of survivors and their supporters are demanding transparency and justice for “abominable crimes” committed at the Instituto Próvolo for deaf-mute children.

In Mendoza, the capital city of the Argentine province of the same name, the trial of ex-priests Nicola Corradi (83) and Horacio Corbacho (61), and former gardener Armando Gómez (49), begun on August 5, is being closely watched. They are being tried on more than two dozen charges of sexual abuse and corruption of minors who were students at Instituto Provolo in the town of Luján de Cuyo, about 800 miles west of Buenos Aires, the national capital.

In a written statement provided to the media, survivors of the sexual abuse meted out at the institution for the deaf described the accused clerics: “They’re monsters in cassocks who committed abominable crimes against minors.” The statement said, “We note that the Catholic Church has given financial support to the defense of the accused. That the results of the canonical probe by Vatican representatives Dante Simon and Alberto Bochatey have not been released is clear evidence of a cover-up and is a mockery of the judiciary and society as a whole.”

The frail Corradi is currently under house arrest.

Victims and their supporters are asking the court to allow the use of one-way mirrors during the trial so as to prevent further trauma to the victims. They are also asking for additional psychological counseling for the victims, as well as having sign language interpreters during all of the proceedings so the victims can effectively communicate.

In an interview with an Italian jouranlist, Corradi laughed and recounted unapologetically the sodomitic rape of children. A video recorded at a hospital in Italy in 2017 showed the elderly priest boasting about his crimes.

Carlos Lombardi, an attorney for Argentina’s Network of Survivors of Church Abuse, said it is “impossible that [the Church in Mendoza] would not know the names of the priests, especially Corradi, and least about the events that occurred in Italy, because its own canonical norms require it.” Lombardi said the victims’ network believes that the archdiocese should face canonical sanctions because of its lack of control. He added that “Church authorities should reveal the priests who remain in the diocese.” Lombardi alleged that Corradi was introduced to the bishop, José María Arancibia, who presided over the diocese at the time. “The Vatican knew the story because it was Pope Francis who named him to a commission in 2013 to look into the claims. “But it never got anywhere because the system of cover-ups within the Catholic Church continue intact.”

In sum, there are 14 persons accused of various crimes in three different cases involving more than 20 victims ever since the most notorious case of clerical abuse known in Mendoza became known in November 2016. All of the victims were minors at the time of the abuse. One boy was aged 4 years when he was first abused. In one case, Jorge Bordón (50) has already pleaded guilty to charges. The other two cases involve nuns Kumiko Kosaka and Asunción Martínez, as well as several administrative staff members. The trial is expected to go to the end of August. However, because there are approximately 200 witnesses who wish to prove that systematic abuse occurred not only in Argentina, but in Italy as well, it may go into September.

Corradi had been accused of committing serious crimes of sexual abuse at the headquarters of Instituto Provolo in Verona, Italy about 10 years before he arrived in Argentina. Victims of abuse in the South American republic have claimed that Pope Francis, while he was archbishop of Buenos Aires, knew about the accusations of crimes committed in Italy but did nothing. Argentine law enforcement ordered the closing of the Instituto Próvolo in Mendoza in 2016, arresting the two priests and twelve other suspects, including the two nuns. Another Instituto Próvolo installation, located in the city of La Plata near Buenos Aires, is also being investigated. Corradi managed that facility between 1970 and 1997.

Argentine and Italian victims of sexual abuse allege that Church authorities were aware of Corradi’s pedophilic crimes but chose to put him in charge of deaf children, both girls and boys. In 2017, Bishop Giuseppe Zenti denied responsibility, explaining that he had no authority in the matter because Instituto Próvolo is the work of a self-regulating religious congregation. The Instituto Próvolo centers are the work of the Company of Mary for the Education of Deaf-Mutes, which was founded in 1840 by the Italian priest Antonio Próvolo. According to Bishop Zenti, the congregation depends directly on the Vatican. So far, the Vatican authorities have not commented publicly on the Próvolo case.

Accusations against Corradi and other religious of Instituto Próvolo were first aired in a report by Italian newspaper L'Espresso in 2009. The paper reported that 67 former students alleged that they had been abused in the years between 1950 and 1980, while they accused the Vatican of a cover-up. Twenty priests were accused of abusing minors in Italy. Among them were Corradi and the priests Eliseo Primati and Luigi Spinelli. The three subsequently left, going to Argentina to continue their crimes. Primati is being charged with abusing children at the Instituto Próvolo installation at La Plata. Corradi returned to Italy in 2017, a year after the revelations of abuse he allegedly committed.

L’Espresso interviewed a cleric under the condition of anonymity in 2009, who admitted to prosecutors in Italy that he had abused children at Instituto Próvolo in Verona. He told the newspaper, “Yes, I was a pedophile. I was also a student at the Próvolo Institute in Verona[.]” Admitting to what he committed and witnessed, he said: “I can't take it all in anymore and I'm ashamed of the priests who are silent or deny, there is hypocrisy and omertà [a code of silence].” The priest provided testimony to Italian prosecutors, admitting to having begun assaulting children in the 1960s.

In 2013, Cardinal Jorge Bergoglio became Pope Francis upon his election. In 2014, a group of Italian victims in Verona released a video that named the alleged abusers at that institution, including the three priests then in Argentina. Months later, Giuseppe Consiglio, a member of the Verona group, personally gave a letter to Pope Francis that listed the names of the accused. However, it was not until 2017, one year after the priests were arrested in Argentina, that the pontiff ordered an internal investigation into the accusations.

A court in La Plata heard from victims of the horror of sexual abuse committed at night at Instituto Próvolo in Argentina. The abuse happened on weekends, when most of the students were away at home. The abusers focused on children who had no family members. The children at Instituto Próvolo were prohibited from using sign language and could not communicate their horror to their parents. Also, they were told to turn off their hearing aids so they would not hear the screams of abused children. One victim recounted that the older children were forced to abuse younger children while the abusers watched. Some victims alleged that the abusers threatened to kill their mothers if the crimes were revealed.

Sister Komiko Kosaka, born in Japan but raised in Argentina, has been singled out for whipping children. She is accused of abusing children and aiding others in abusing children. According to a lawyer for one of the victims, Kosaka systematically beat children until singling out the most submissive to be raped by other abusers. Kosaka has maintained her innocence even while she is currently under house arrest and has posted bond. One victim, who was a girl at Instituto Próvolo, said Kosaka turned her over to Father Corbacho to be abused. Another victim claimed that Kosaka dressed her in diapers at the age of five years in order to conceal the blood resulting from her rape at the hands of one of the abusers.

According to AP, Ezequiel Villalonga (18) is one of the victims who is to provide testimony. Deaf since the age of 7 years, Villalonga said Instituto Próvolo was a Hell on Earth, where he stayed until the age of 16. “I think that the Church, and everything in it, is false. Everything that they make us read, say, and how to be as a person[.]” Through a sign-language interpreter, he signed frantically, “They are false and demoniacal.” He added, “Life was very bad there. We didn’t learn anything. We had no way of communicating. We didn’t know sign-language; we wrote but didn’t know what we were writing. We asked other students, and they didn’t understand anything, either.”

Mendoza prosecutor Gustavo Stroppiana said the abusers attacked the children in the students’ dormitories, the priests’ quarters, and in the chapel. He said one victim alleged that he had been kept in chains. In a raid, police found condoms and contraceptive pills.

“No words suffice to express our horror at what they endured and what injured them so much,” said auxiliary bishop Alberto Bochatey of La Plata, who was named by Pope Francis in 2017 to take over the Company of Mary, which administered the Instituto Próvolo. “We must beg forgiveness and try to heal in the best way possible, without hatred,” the bishop said. “When I was designated, the first thing I did was to go to the victims to beg forgiveness, but I was thrown out. Even now I have not been able to do so. We’ll have to wait until the trial ends,” said Bochatey, who added that he is happy that the trial has begun.