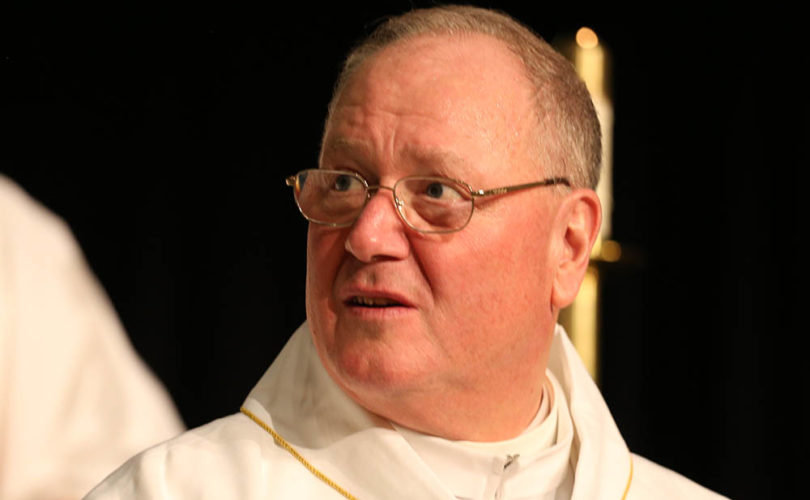 July 5, 2018 (LifeSiteNews) – A Catholic professor and writer has penned an open letter (full text below) to New York’s Cardinal Timothy Dolan, Chairman of the USCCB’s Committee on Pro-Life Activities, asking him to invoke Canon 915 to discipline Catholics who are abortion activists, not those who implement Trump’s border enforcement policies.

The letter, written by Prof. Christopher Manion, comes in response to Bishop Edward Weisenburger of Tucson calling upon his fellow bishops to support “canonical penalties for Catholics who are involved” in implementing President Trump's immigration policy.

“Your Eminence, your colleagues’ renewed enthusiasm for Canon Law at Fort Lauderdale will lift the spirits of the faithful. I assure you that the Catholic laity will support you all when you instruct your priests that Canon 915 shall be faithfully followed in your dioceses,” Manion states in his open letter.

Manion, who has taught in the departments of politics, religion, and international relations at Boston University, the Catholic University of America, and Christendom College, urged the Cardinal to apply Canon 915 to those Catholics who publicly promote the “truly scandalous and objective evil of abortion.”

“Your Eminence, you are the USCCB’s spokesman and designated leader on pro-life issues. You are uniquely qualified to urge your brother bishops to focus on the truly scandalous and objective evil of abortion that demands their attention and action. Specifically, you can encourage them to apply the magisterial teaching of the Church consistent with the binding Church law contained in Canon 915,” he wrote.

I write you in your capacity as Chairman of the USCCB’s Committee on Pro-Life Activities. I am a Catholic baptized in Sacred Heart Church on the campus of Notre Dame, where my father had begun teaching in 1919. Like you, I was raised one of five children raised in the fifties in a faithful midwestern family. I’ve been working hard to love the faith, practice it, and defend it ever since.

At the USCCB’s recent meeting in Fort Lauderdale, Bishop Edward Weisenburger of Tucson received significant support from your colleagues for his suggestion that the bishops resurrect Canon 915 of the Code of Canon Law, which says: “Those who have been excommunicated or interdicted after the imposition or declaration of the penalty, and others obstinately persevering in manifest grave sin are not to be admitted to holy communion.” [Emphasis added]

I welcome the news that our bishops are willing to obey Canon 915, especially because, as you recently observed, for years most bishops had essentially decided to put Canon 915 into cold storage – down there with Humane Vitae.

Your Eminence, your colleagues’ renewed enthusiasm for Canon Law at Fort Lauderdale will lift the spirits of the faithful. I assure you that the Catholic laity will support you all when you instruct your priests that Canon 915 shall be faithfully followed in your dioceses.

Curiously, Bp. Weisenburger cited the correct Canon, but he chose [the] wrong target – immigration law enforcement. As you have pointed out, clearly and soundly, the responsibility of addressing that prudential issue belongs firmly in the realm of the laity, not the hierarchy.

You will recall your 2011 exchange with Rep. Paul Ryan, who chaired the House Budget Committee at the time. Mr. Ryan had been criticized by one of your colleagues for his “immoral” budget.

“We bishops are very conscious that we are pastors, never politicians,” you wrote. “As the Second Vatican Council reminds us, it is the lay faithful who have the specific charism of political leadership and decision (Lumen Gentium, 31; Apostolicam Actuositatem 13).” You gently corrected your brother bishop and assured the Congressman that good Catholics can prayerfully disagree on political particulars, informed by our conscience and the Gospel, confident that our bishops will support our right to do so – even if they personally disagree.

Your Eminence, the Church emphasizes that immigration law clearly belongs to this prudential realm.  To make things perfectly clear, the Catholic Catechism reiterates that the particulars of immigration law are the responsibility of the laity, and, in particular, of “political authorities.” (CCC 2241.2)

But not when it comes to abortion!

Your Eminence, when it comes to abortion, and the formal, obstinate, and manifest support of abortion, we’re talking about an “unspeakable crime” that “poison[s] human society” [LG 51, 27]. And it is that objective evil which you combat with every breath, a battle in which your brother bishops have made you their leader.

Your Excellency, your fellow prelates elected you to lead them – and us – in the battle to save the lives of unborn children. But many of them seem to spend most of their time advocating their prudential agenda on issues such as health care, taxes, welfare, the weather, and amnesty for illegal aliens. Unfortunately, many of them employ truly shocking epithets to attack those among the faithful laity who disagree with those prudential views.

Yet, as you helpfully clarified for Congressman Ryan, all of these are issues on which good Catholics – and good citizens – can and do disagree.

Your Eminence, you are the USCCB’s spokesman and designated leader on pro-life issues. You are uniquely qualified to urge your brother bishops to focus on the truly scandalous and objective evil of abortion that demands their attention and action. Specifically, you can encourage them to apply the magisterial teaching of the Church consistent with the binding Church law contained in Canon 915.

This clarion call will provide all of our shepherds the opportunity to raise high the standard of truth which has, alas, been hidden for decades. As you told the Wall Street Journal in 2012, our shepherds have had “laryngitis” on Humanae Vitae since “the mid- and late '60s.”

Cardinal Dolan, now is the time to bring these eternal truths “out of the shadows”! Bishop Weisenburger has demonstrated that our shepherds can muster the fortitude to regain their authentic and authoritative voice, preach the eternal truths of the Faith, and defend that faith by applying Canon 915, which your colleagues have now resuscitated.

Let’s face it, Your Eminence: Catholic politicians who consistently and obdurately support “abortion rights” are indeed “obstinately persevering” in the support of this “manifest grave sin.” This year, ten of them are running for the U.S. Senate, and literally dozens (including Bp. Weisenburger’s own congressman, Rep. Raúl Grijalva) are running for the U.S. House of Representatives.

Please, your Eminence, in addressing your brother bishops, echo the words of Saint John Paul II – “Do not be afraid!” Already two of your colleagues – Bishop Paprocki of Springfield and Archbishop Naumann of Kansas City – have invoked Canon 915. It works. They have experienced no retaliation, no revoking of federal funding, no threat to revoke the tax exemption of the Church’s various NGO’s.

Moreover, Archbishop Joseph Naumann, chosen by your colleagues to succeed you as Chairman of the USCCB Committee on Pro-Life Activities, has spoken strongly in support of following Canon Law.

Your Eminence: please rally your brother bishops around the immutable truths of the faith! Ask them to defend the unborn and to abandon their silence – not only on Humanae Vitae but in the face of the scandal that dozens of Catholics running for the US Congress and Senate this year who are public and persistent supporters of “abortion rights.”

Cardinal Dolan, you are admired and respected by your colleagues, and revered by millions of the faithful. In this critical moment, God has placed you in the position of speaking up for life, for the Church, and for the timeless truths of the Faith.

I urge you to lift high the Cross and encourage your brother bishops to do the same. Yes, you will face vilification and scorn from your friends in the media; the secular elites will counter with a barrage of vulgar epithets; and pro-abortion politicians will heap upon you high dudgeon and scorn.

But haven’t the enemies of the Risen Word done that for two thousand years?

Your Eminence – in the words of Saint John Paul II, “Do not be afraid!”