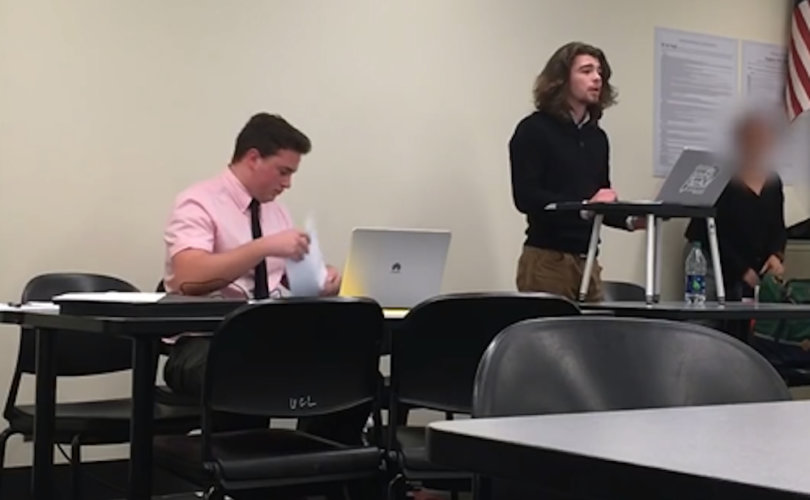 LAYTON, Utah, February 6, 2019. (LifeSiteNews) — Two Utah high school seniors lost a round in a debate when they argued against racism and classism by citing the works of two “racist” pundits, psychologist Jordan Peterson and conservative writer Ben Shapiro.

A debate judge deemed the writings of “white supremacists” Peterson and Shapiro as inadmissible in the Jan. 5 verbal contest held at Arizona State University in Tempe.

Layton High School senior Michael Moreno’s cellphone video begins as he and an unnamed male partner debate immigration policy with two Hispanic girls from Juan Diego Catholic High School near Salt Lake City. The girls recited a slam poem instead of offering an argument. They said the boys’ “privilege” and “caucasity” should preclude them from the debate.

Moreno referred to Peterson and Shapiro when he argued in the video that the girls were using “class guilt” to stifle his speech. “We are held responsible for our ancestors, which has no linkage to us,” Moreno said. “They just assume that we have privilege because other white people do.”

In response, one of the girls asked, “Can you give me an equivalent of the KKK but for white people?” Moreno answered, “We think racism is bad.”

According to the Daily Wire, Moreno said his opponents quoted experts who criticize assimilation into American culture and the notion that immigrants should behave like Americans in order to live “the good life.” Referring to immigration as “legal” or “illegal” is inherently dehumanizing, the girls said. They said, “Promises of citizenship and the ‘good life’ force non-normative subjects into a slow death, working towards the unbelievable goal of the American dream.”

Moreno said in his video that he and his unnamed partner could not propose a negative argument because their opponents did not articulate a positive position in their “slam poem.” Because the debate allowed the affirmative side to propose a plan that could then be assailed by the negative side, Moreno said it was unfair that the opponents did not propose solutions to reduce restrictions on legal immigration.

Before Moreno’s video begins, he speed-read quotes from Peterson and Shapiro on identity politics. He cited Shapiro’s comments at the University of Connecticut in 2018, where Shapiro said: ‘Evil things are still evil even if I’m a white well-off religious man and good things are still good even if I’m a white well-off religious man.” Moreno also quoted Peterson, saying: “It goes along with this idea of class guilt. Because your group membership is the most important thing, if your group at some point in the past did something reprehensible – which of course every group has done – then you’re de facto responsible for that.” The girls claimed that Moreno and his partner had no standing because both are “white males.”

The judge said the evidence offered by Moreno and his partner and “saying things like ‘your identity doesn’t matter'” were actually racist. Intervening in the debate, the judge said, “I specifically told you guys, ‘Don’t read racist s–.’ … This argument is inherently just like saying, ‘Identity politics doesn’t matter and is bad.’ How is that OK?” Soon, the judge ends the debate, claiming that the girls were being subjected to “actual psychological violence” and that their safety was at risk. The judge said finally: “Why do you think that being endorsed by white supremacists like Ben Shapiro or Jordan Peterson is good?”

In the aftermath, one of the debate directors admitted that the judge had overstepped his bounds. On video, the director is heard to say: “I think you are totally right that (the judge) overstepped a little bit by stopping the debate and deciding, but I also think it’s incredibly obvious that – regardless of how many ways you try to couch this argument in front of that judge – the bar for the other team to respond to it was going to be so low that the argumentative content that you chose, the strategy that you chose, for that judge and for his stated philosophy, was a poor choice on your part.”

Neither Shapiro nor Peterson have publicly endorsed racism or class-driven ideologies. Shapiro has encountered raucous students on campuses where he has sometime been disinvited from speech engagements. Grand Canyon University — a private Christian institution in Phoenix — recently reversed course and invited Shapiro to speak after cancelling his appearance for the sake of “unity.” Gonzaga University — a Catholic Jesuit institution in Seattle — also reconsidered and eventually will host him on campus in the spring.