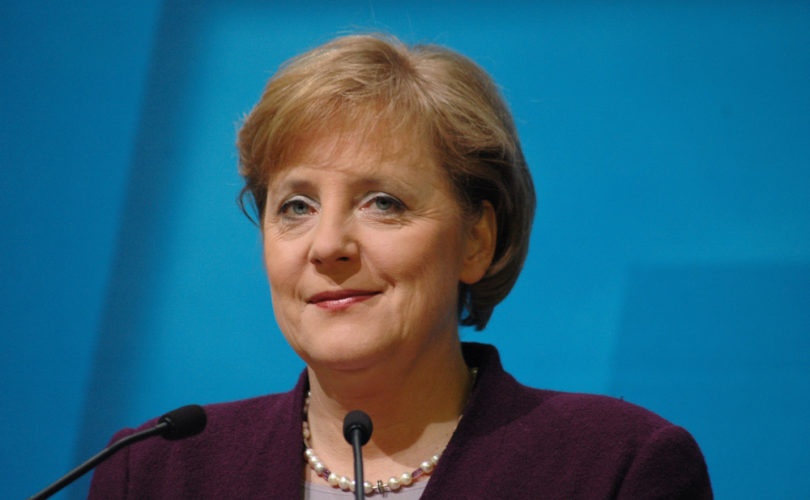 A German advisory council on ethics has told the government it should decriminalize incest between consenting adults. But Chancellor Angela Merkel’s ruling Christian Democrats have wasted no time in rejecting the advice.

On Wednesday the National Ethics Council voted, by a two-to-one margin, to call for the decriminalization of incest. “Criminal law is not the appropriate means to preserve a social taboo,” the council explained in a statement. “The fundamental right of adult siblings to sexual self-determination is to be weighed more heavily than the abstract idea of protection of the family.”

Many might deem the “fundamental right…to sexual self-determination” considerably more of an abstraction than “protection of the family,” including both judges and politicians.

But the ethics council argued that because incest was rare in Germany though illegal (several news reports cited a study by the Max Planck Institute claiming two to four percent of Germans have had incestuous relations), it would remain rare if legalized, and did not need a law to suppress it.

The council also dismissed the risk of producing children with genetic defects in incestuous relationships. Not because the risk isn’t real – it is, because both parents are more likely to have and therefore to transmit the defective gene – but because there was no law against non-incestuous marriages between partners with the same defective genes.

The council, created by law to advise the German government on ethical issues around health and science and comprised of 26 members with impressive academic degrees drawn from medical, scientific and theological fields, has a history of dismissing traditional morality. In the past, for example, the council recommended removal of legal restrictions against embryonic stem cell research.

Still, a minority of members reliably speak up for Christian morality. In this case, nine members released their own statement, defending current incest law because it “protected the integrity and incompatibility of different familial roles, as an important precondition of healthy personality development.”

This idea that children should be free of sexual exploitation not only by parents but by brothers and sisters, relying on them for protection and support, apparently did not occur to most of the experts.

However, it did occur to the judges in the case that led to the ethics council’s consideration of incest.  This involved brother and sister Patrick Stuebing and Susan Karolewski, who had had four children together, two of whom are disabled, before a court jailed the brother and removed all but the youngest from the sister. In 2012, the brother lost an appeal to the European Human Rights Council.

The German court stated: “Incestuous connections lead to an overlap of family relationships and social roles and thus to a disturbance of a family bereft of [clear] assignments. … Children of an incestuous relationship have great difficulty finding their place in the family structure and building relationships of trust with their next caregivers. The vital function of the family for the human community … is crucially disturbed if its ordered structure is shaken by incestuous relations.”

As for the government that the ethicists purport to advise, Germany’s Christian Democrats, it rejected the recommendation. “The abolition of the offense of incest between siblings would be the wrong signal,” said spokesperson Elisabeth Winkelmeier-Becker. “Eliminating the threat of punishment against incestuous acts within families would run counter to the protection of undisturbed development for children.”

The social prohibition on incest is by no means universal: incest was the rule rather than the exception in classical Egyptian Pharaonic court culture, where such relations were pursued as a means of preserving dynastic bloodlines. Napoleon abolished the law against incest in France.

Moreover, the appeal of incest among America’s pop culture leaders is also evident: American novelist John Irving, for example, championed abortion on demand in Cider House Rules and incest in Hotel New Hampshire.  Moviemaker Woody Allen first engaged in the familiar Hollywood trope of having a sexual relationship with a woman young enough to be his daughter, Mia Farrow, by actually marrying Farrow’s daughter, Soon-Yi.

Commenting on this and other examples of incest in a 2010 Slate.com article, William Saletan called incest a  “cancer of the family” that disrupts all the relationships within it, not only the one between the two sexually involved. Saletan cites the words of Allen’s son Ronan: “He's my father married to my sister. That makes me his son and his brother-in-law. That is such a moral transgression… I cannot have a relationship with my father and be morally consistent.”

Jeff Johnston, issues analyst for Focus on the Family, said, “If the German government follows this council’s recommendation and legalizes adult incest, children will be irreparably damaged. It's unconscionable. Children are protected by laws against incest from being sexually abused by family members. These aren’t ‘abstract ideas,’ but are common sense standards that give real people—our children—the best chance to grow up in safety and security.”

German sociologist and writer Gabriele Kuby agreed. The convert to Catholicism, dubbed “Europe’s Cassandra” for her trenchant criticism of the German government’s campaign to eliminate gender differentiation, she called the ethics council’s recommendation “shocking” and “yet another decision to deregulate the sexual standards.”

Kuby told LifeSiteNews by email that “the taboo of incest is …inscribed in the hearts of men and the law of most countries that sex between blood-relatives is abominable. This taboo creates the inner space of family, where children can grow up innocently and free in an un-sexualized environment. If that is taken away, childhood ceases to exist. The very special bond that sexual relationships create is reserved to father and mother alone. Any other kind of sexual relationship destroys the fragile fabric of family on which the wellbeing of the individual and society depends.”

Kuby added that the ethics council was apparently unconcerned about the high risk of genetic disorders in children born from incestuous relations, because it believes that,  “after all, children with physical disorders can be aborted right up to birth. ‘Sexual autonomy’ seems to be the highest of all values – no matter what the cost for children, the family and society.”