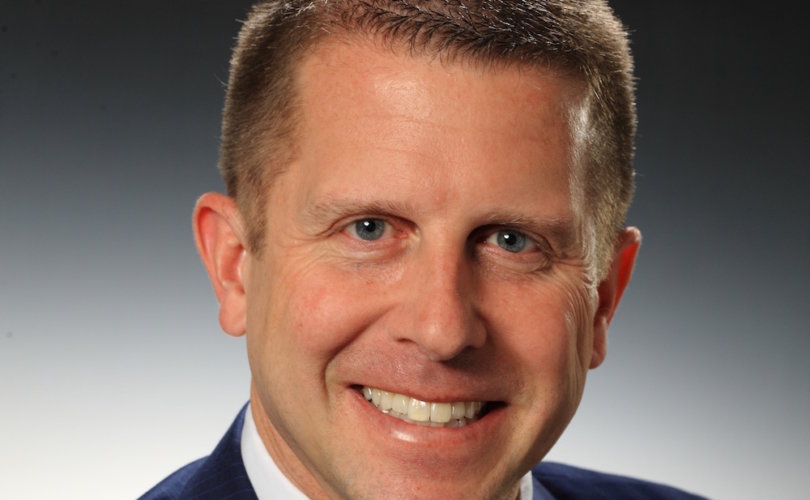 OTTAWA, November 18, 2016 (LifeSiteNews) — A Progressive Conservative candidate has called for war on social conservatives in the party a day after his crushing defeat in Thursday’s Ottawa-Vanier byelection.

André Marin said Friday that PC leader Patrick Brown had to put social conservatives “in their place,” alleging they constitute “a threat to the party,” reported the Ottawa Citizen.

“If they start calling some of the shots, I think you’ll see a very fast erosion in the popularity of the Progressive Conservative party,” Marin said.

Marin’s remarks received widespread twitter notice, with LGBTory among those sending out his message:

“The Party is defined by its members,” Gunnarson told LifeSiteNews in an email. “It is critical that so-cons stay in and continue to join the Party to keep a good balance, and to prevent a further slide to the left than has already happened since Brown became leader and formed another version of the Liberal Party.”

Added Gunnarson: “Let’s not forget that social conservatives hold well thought out and rational positions on all conservative issues, and as such make for well-rounded, thoughtful and compassionate members of elected office.”

Marin, a former Ontario ombudsman, lost Thursday by a 20 point margin to Nathalie Des Rosiers in the Liberal stronghold of Ottawa-Vanier.

The PCs thought they had a real chance to win the riding, even though it’s been in Liberal hands since 1971, because of Premier Kathleen Wynne’s abysmal popularity rating, which at 20 percent in the latest poll has left her Canada’s least popular premier. Moreover, according to the Citizen, “the party’s internal numbers showed a close race.”

Marin also implied in his post-election remarks that he’d been damaged by the pro-Trump tweet and photo by two PC staffers, including his campaign manager.

The Liberals took a screenshot of the tweet before it was quickly deleted, and sent the image out in bilingual mail-outs to thousands of residences in the riding, stating: “In this byelection, it’s time to send a message. We are a progressive, inclusive community. And what happened in the U.S. will not happen here.”

The affair became a minor tweet-gate, as evidenced in this November 14 tweet by Toronto Star political columnist Martin Regg Cohn:

Tweeted and deleted? Libs screen-captured a pro-Trump tweet/pic of #PCPO campaign aides in Ottawa-Vanier byelexn before they cld delete it. pic.twitter.com/KSPO1HODQn

“I’m the most anti-Trump person you can possibly find,” Marin stated Friday. “I think that scared a lot of people, unfortunately.”

Marin made his remarks about social conservatives when asked if he would ever consider running again as a PC candidate:

I’ve got some thinking to do…I believe in the PC brand. I believe in Patrick Brown. I believe that steering the party to the middle is the way to do it. He’s going to have a challenge on his hands to keep the so-cons in their place. Harper managed to do very well, and I think Patrick Brown will do very well. But I think it’s a threat to the party. Because if they start calling some of the shots, I think you’ll see a very fast erosion in the popularity of the Progressive Conservative party.

CLC’s Gunnarson noted that Marin “seems to be suffering from delusion if he thinks you can rid the Party of SOCIAL Conservatives and still win,” adding that the pro-life Oosterhoff won “nearly 30 percent more than the socially liberal Hudak, who held the riding before him.”

“Simple math makes it clear. We make up 40 percent or more of the Party,” observed Gunnarson. “Patrick Brown himself won because of the so-con support behind MPP Monte McNaughton, whose supporters backed Brown — based on his pro-life, social conservative federal vote record and promise to scrap the Wynne sex-ed curriculum — once McNaughton withdrew from the race.”

“Had the PCs run in Ottawa-Vanier on a parental rights platform, Marin wouldn’t have known what to do with all the volunteers and donations that would’ve come from CLC,” Fonseca told LifeSiteNews in an email.

“The real threat to the PC Party is liberals like him and Patrick Brown. That’s why they got smoked in Ottawa-Vanier. Had Marin run on a parental rights platform, it would have been a much closer race. Who knows – he might even have won!”

The “path to victory for the PCs is to energize the Party’s base, meaning the social conservatives, and give them something to believe in,” Fonseca told LifeSiteNews.

“To paraphrase the old Patrick Brown in his TVO debate with rival Christine Elliott, ‘The PCs can win as conservatives. They don’t need to become liberal-lite’.”

“Following Brown down the liberal-lite rabbit hole” is “precisely why Marin lost,” added Fonseca. “And lost ‘big league’ — in the immortal words of Donald Trump.”