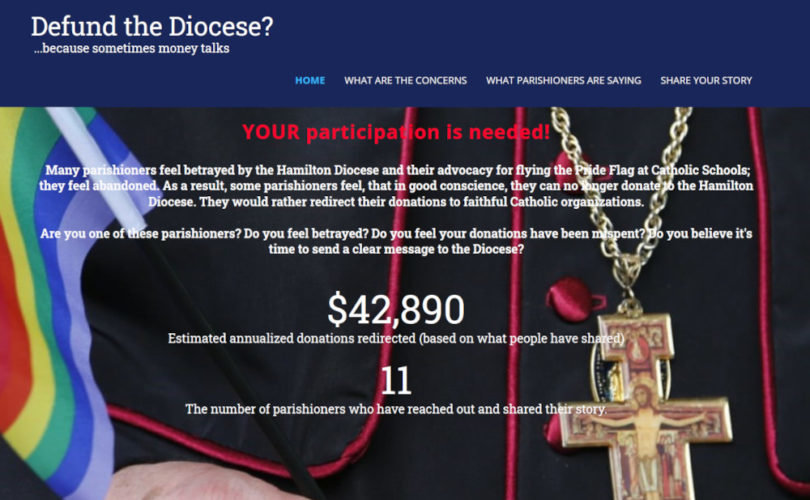 HAMILTON, Ontario, June 16, 2021 (LifeSiteNews) — Faithful Catholics in the Canadian province of Ontario are taking a stand, calling to “defund the diocese” in response to a series of controversial actions undertaken by the Hamilton Diocese under Bishop Douglas Crosby, including flying the rainbow flag in celebration of “Pride Month.”

Parishioners within the Diocese of Hamilton have set up a website to express their concerns about some of the diocese’s problematic decisions, including its backing of a “spiritual development day” for Catholic school teachers last year with a facilitator lineup featuring LGBTQ+ activists. Most recently, a report for Catholic educators put out at the request of the diocese’s Episcopal Vicar for Education argued for flying the rainbow flag over Catholic schools to demonstrate “solidarity” with the LGBTQ+ community.

In response, some parishioners are encouraging concerned Catholics to give their Sunday donations to deserving Catholic charities rather than the diocese.

Estimated annual donations redirected from the parish now total $42,890, according to the site.

The report provided to the Institute for Catholic Education and the Directors of Education at the request of Fr. Cornelius O’Mahony, Episcopal Vicar for Education, describes the diocesan bishops’ commitment to “equitable, safe, and inclusive school communities.”

“Following several months of ‘lockdown’ and numerous tragic events involving the deaths of people of colour, there was a rallying cry for actions of solidarity and the Black Lives Matter movement emerged with renewed vigour in June 2020 during what is traditionally known as PRIDE month,” the report reads. “In many ways the two are complementary as both BLM and PRIDE are focussed on the community speaking up against injustice and making the noted individuals/groups visible.”

The report goes on to advocate the use of the “pride flag,” saying, “A visible sign such as a Rainbow Flag or Progress Flag is an unspoken sign of solidarity, that ‘we see you and are here to support you’ and is noticed by those that are looking for it as it also indicates that this is a safe space for dialogue.”

The Catechism of the Catholic Church (CCC 2357) defines homosexual acts as “intrinsically disordered” and “contrary to natural law,” adding that “under no circumstances can they be approved.”

When contacted via email, Fr. O’Mahony told LifeSiteNews, “The document was intended for a very small audience for discussion but was used in the public debate on the issue of the rainbow flag without any permission from myself or the authors.” He said the report is “not a public statement from the Diocese of Hamilton” and that he and the authors had not granted “permission for its use beyond those for whom it was intended.”

When asked to comment on the document’s implications, despite its intended audience, O’Mahony did not respond again prior to press time.

On May 6 the Toronto Catholic School District Board passed motions proclaiming June to be observed as Pride Month and mandating the Pride flag be flown at all schools and the school board office.

The Halton District School Board, also in Ontario, voted against flying the Pride flag in April and has faced relentless pressure from LGTBQ+ advocacy groups to reverse their decision.

One parishioner within the Diocese of Hamilton, identified only by the initials T.A., commented: “I knew for the past few years that the Diocese was knee-deep in the LGBT stuff, but never in a million years did I think I’d live to see the Diocese openly advocate for flying the ‘Pride’ flag at children’s schools. Jesus must be weeping for his children. I’ve had enough. The Diocese isn’t getting another penny from me until they clean up. I’m done.”

Another parishioner (P.V.) said: “We used to donate about $100 weekly to our parish in the Hamilton diocese. In good conscience, we and several families we talked to sadly can no longer fund what they are now doing.”

A priest with the Hamilton Diocese wrote in a letter that flying the so-called “Pride” flag “goes against the teaching of the Catholic Church.”

The priest suggested that instead of the Pride flag, the school board should “promote across our Catholic schools and school boards the image of the Sacred Heart of Jesus,” an idea also backed by Cardinal Collins of the Archdiocese of Toronto.

The month of June is dedicated to the Sacred Heart of Jesus.

LifeSiteNews also reached out to Bishop Douglas Crosby and Communications and Public Relations Manager Pam Aleman for comment, but has yet to hear back.