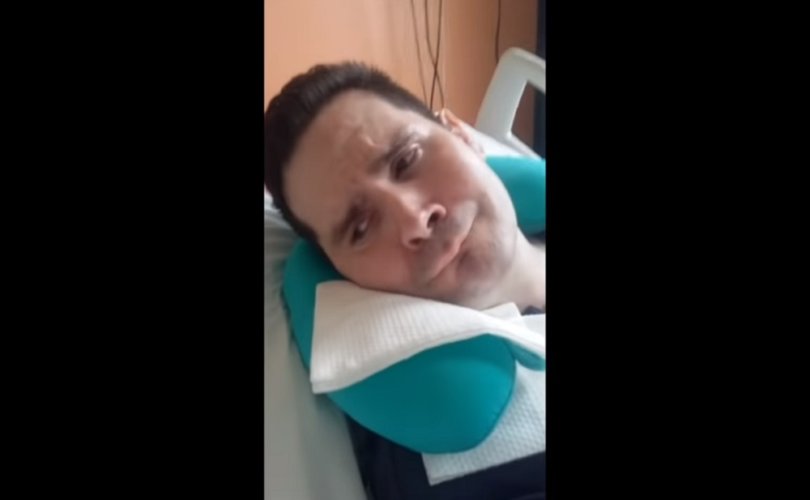 July 2, 2019 (LifeSiteNews) – The dehydration and starvation of Vincent Lambert has started again. Less than four days after the French Court of Cassation ruled against the Parisian Court of Appeal’s decision that saved Lambert’s life on May 20, Dr. Vincent Sanchez seized the earliest opportunity to deeply sedate Lambert and pull his feeding tube on Tuesday, July 2.

France’s Terri Schiavo, a tetraplegic and brain-damaged 42-year-old, will die within about a week, according to Bernard Devalois, a doctor who specializes in palliative care who told the French press agency AFP that in such cases patients intravenously receive midazolam, a powerful sedative. Mainstream media are repeating that “Vincent will not suffer” while his organs shut down due to lack of fluids.

“In Mr. Lambert's case, there is no sensation of thirst: in order to be thirsty, you need to be conscious,” said Devalois.

The media are also repeating that Lambert is in a “vegetative state” and that he is going to be “allowed to die,” in the same way that they are insisting that he has been “unplugged,” as if a life-support machine has been turned off.

Specialized doctors who work personally with brain-damaged patients in the same condition as Lambert have throughout the whole affair explained that he has a form of consciousness that, as his mother confirms, when well disposed he reacts to her demands, follows visitors with his eyes and is capable of swallowing custards and fruit purée in small quantities when she gives them to him with a spoon. He is emphatically not in an end-of-life situation.

Like Eric Kariger, the first doctor who put Lambert on an end-of-life path in 2013, Sanchez is a geriatrician who has no experience or specialized knowledge of brain damaged and severely handicapped people.

Viviane Lambert, the mother of Vincent who together with husband Pierre and two of their children has been fighting for his life in the courts for the last six years, received notice of the end-of-life process by email from Sanchez on Tuesday morning.

She was just back from Geneva, where she had given witness the previous day at the United Nations to the fact that her son is alive and needs to be protected from being assassinated.

Viviane Lambert was able to speak twice on Monday at the Palais des Nations, the UN’s headquarters in Switzerland, where the Human Rights Committee is holding its 126th session. Having traveled to Geneva together with lawyers Jérôme Triomphe and Jean Paillot, as well as Gregor Puppink of the European Center for Law and Justice (ECLJ), she addressed the diplomatic delegates to the UN commission and also gave a press conference. At that point, she was not aware that Sanchez intended to make a new attempt to kill her son the next day.

Addressing the delegates, she said:

“Today I am sending you a cry for help.

“Without your intervention, my son, Vincent Lambert, will be euthanized by a doctor because of his cerebral disability.

“He is in a state of minimal consciousness: he is not a vegetable! He sleeps at night, wakes up during the day, and looks at me when I talk to him. He only needs to receive his food through a tube. And it is that tube that his doctor wants to deprive him of, in order to make him die, even though a team of legal experts has stated that he is not being subjected to any kind of therapeutic aggressiveness.

“On May 19, on the day before his scheduled death, he cried when he saw us. We are still deeply shaken.

“On two occasions, this Committee has asked France not to kill Vincent. But the French government refuses, blatantly violating its international obligations.

“I beg you to intervene with France to remind it of its obligation to respect the provisional measures prescribed by the Committee, and not to kill my son.

“Apart from my son, it is the lives of the 1,700 other people who share his condition that are at risk.

To the press, she said that her son was at risk of being “assassinated.”

The Committee for the Rights of Persons with Disabilities is clearly sensitive to her emotional pleas. Having been informed of Sanchez’ decision to go ahead immediately with the end-of-life protocol, it made an emergency request to France on Tuesday, demanding the country respect its decision requiring “provisional measures” not to implement an irreversible act that would deprive Lambert of his life, so that the committee can examine whether this disabled person's rights are being violated.

Later during the day, Triomphe and Paillot published the following statement:

“On July 2, we informed the CRPD of Dr. Sanchez’s new announcement indicating that he is stopping feeding and hydrating Vincent Lambert as of today.

“The CRPD's Requests and Investigations Department has urgently reiterated to the French State its request to maintain Mr. Vincent Lambert’s food and hydration as a precautionary measure.

“It is recalled that provisional measures are mandatory in order to guarantee the effectiveness of the appeal to the CRPD, which requires that Vincent Lambert's life not be harmed.

“The mandatory nature of the CRPD's provisional measures was reiterated by the (French) Defender of Rights in person on May 17, 2019.

“We have just informed Dr. Sanchez.

“We will continue to act through all legal channels to enforce these interim measures.

“There will be no further comments as things stand.”

Counsel for parents, brother and sister of Vincent Lambert.

It is clear that they have not yet given up hope.

As for Vincent Lambert, he has up to now shown exceptional resiliency in remaining alive despite his difficult situation. He survived 31 days without food and little water in 2013 until a court ordered that he be fed and looked after.

According to Emmanuel Hirsch, professor of medical ethics at Paris-Saclay University, “Vincent Lambert, in his resolve to live in the confinement of a hospital room, is giving witness of his will not to give up, of not renouncing his existence.”