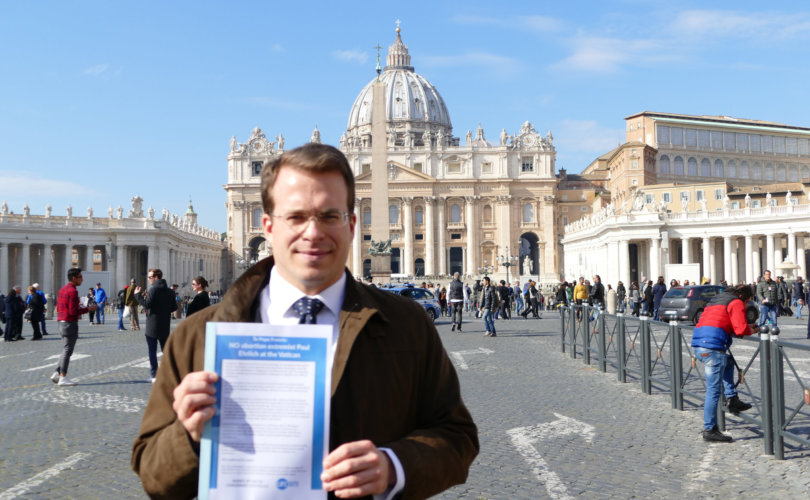 VATICAN CITY, February 23, 2017 (LifeSiteNews) – More than 10,000 names were delivered to the Vatican this week from people across the world opposed to notorious population control zealot Paul Ehrlich speaking at a Pontifical Academy of Sciences conference.

LifeSiteNews Rome correspondent Jan Bentz brought a petition with 10,710 names to the Vatican on Monday asking Pope Francis to stop plans for the pro-abortion and anti-Catholic Ehrlich to address a symposium titled “Biological Extinction” set for next week.

In addition to asking the Holy Father to stop Ehrlich from speaking at the Vatican conference, the LifeSite petition requests that the pope clarify that the Vatican does not in any way support Ehrlich's “inhuman and deadly ideas.”

Ehrlich, author of the 1968 book “The Population Bomb,” is considered the father of today’s pro-abortion population control movement, though many of his dire population predictions have proved false in the decades since the book’s release.

He called Pope Francis’ environmental encyclical Laudato Si’ “raving nonsense” because it excluded population control via contraception to combat climate change, stating the pope was “dead wrong” to have done so.

“The most unethical thing going on now” in religion is the Catholic Church’s “opposition to the use of contraception,” he said in a 2014 book, “Hope on Earth: A Conversation.”

The “main source” of this is “the Vatican and its bishops,” Ehrlich wrote, also saying “the pope and many of the bishops are one of the truly evil, regressive forces on the planet.”

Ehrlich has openly defended forced abortion as a means of population control, along with sex-selective abortion and mass forced sterilization.

“It is impossible to calculate the possible millions of deaths globally this man and his ideas may indirectly be responsible for over the past five decades,” background information on the LifeSite petition states.

Ehrlich also wrote in 2013 that religion and children were a threat to global civilization, decrying an “endarkenment” or “rapidly growing movement towards religious orthodoxies that reject enlightenment values.”

Ehrlich wrote that these “barriers” to “even considering [taking steps to curb population growth)” “are manifest in dangerous trends such as,” among other things, “climate denial” and “opposition to condoms (for AIDS control) as well as other forms of contraception.”

“If ever there was a time for evidence-based (as opposed to faith-based) risk reduction strategies,” he said, “it is now.”

The Vatican’s Pontifical Academy of Sciences (PAS) invited Ehrlich to present a paper at its “How to Save the Natural World on Which We Depend” conference, which runs from February 27 to March 1.

The archbishop invited Socialist Vermont Sen. Bernie Sanders to address a PAS conference on social issues last year while in the midst of his campaign for the Democratic nomination in the U.S. presidential race. Sanders’ positions on life, marriage and religious liberty conflict with the teachings of the Church.

Archbishop Sorondo was also dismissive of criticism over the appearances by pro-abortion population control supporters economist Jeffrey Sachs and then-UN Secretary-General Ban Ki-moon at a 2015 PAS conference on climate change. At the time, Sorondo said it was only “the Tea Party and all those whose income derives from oil have criticized us.”

LifeSiteNews’ petition was addressed to Archbishop Sorondo as chancellor for the PAS.

“Giving Ehrlich a platform to speak at a conference about ‘Biological Extinction’ will only create confusion in the minds of believers and unbelievers alike who will wonder if the Church no longer defends the sanctity of human life and the unitive and procreative integrity of the conjugal act,” the petition stated.

Considering Ehrlich's background might not be well known to some, the LifeSiteNews petition opposing his invitation to speak at the Vatican has received solid response and continues to garner signatures.