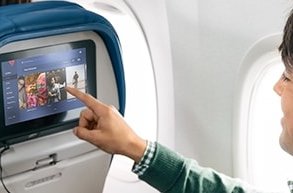 In a statement, Delta claimed that it had not requested that “homosexual content” be removed from movies shown on its flights.

“We value our in-flight entertainment options as a means to reflect the diversity of the world,” a company statement said. “We are reviewing the processes of our third-party editing vendors to ensure that they are aligned with our values of diversity and inclusion.”

According to Fox News, a spokesman said Delta is “immediately putting a new process in place for managing content available through Delta’s entertainment.”

“Studios often provide videos in two forms: a theatrical, original version and an edited version. We selected the edited version and now realize content well within our guidelines was unnecessarily excluded from both films,” the statement continued. “We are working to make sure this doesn’t happen again.”

“What message is this sending to viewers and especially to women?” Wilde tweeted. “That their bodies are obscene? That their sexuality is shameful?”

Wilde noted that airlines contract with third party companies to tailor movies according to what is deemed appropriate.

For example, airlines showed a version of Rainman, which starred Dustin Hoffman, who played an autistic savant who fears flying. Wilde did not mention Delta by name in the tweet.

“I urge every airline, especially those who pride themselves on inclusivity,” Wilde wrote, “to stop working with this third party company, and trust the parental advisory warning to allow viewers to opt out if they choose.”

“The studio has agreed to provide a special Delta edit that retains the LGBTQ+ love scenes in both ‘Booksmart’ and ‘Rocketman’ that will be on our flights as soon as possible,” the Delta spokesman added.

Booksmart has been described as a coming of age film. It depicts lesbian sexuality and nudity in a story about two high school girls.

Delta Airlines was also criticized for filtering out male homosexual acts when it showed Rocketman, which depicts the life of popular homosexual entertainer Elton John and his homosexual liaisons, alcoholism, bulimia, mental illness, and drug use.

On Twitter, digital content editor Shana Krochmal of Entertainment Weekly criticized Delta for deleting scenes of male-on-male perversion. While flying on Delta, she found that the inflight version of Rocketman had been “stripped of almost every gay reference or scene that Elton John fought to keep in the film’s mainstream release, including a simple chaste kiss.”

Delta Airlines had previously received the highest rating of LGBTQ compliance from the pro-homosexual Human Rights Campaign and its Corporate Equality Index (CEI).

Censoring the word lesbian is just batshit insane what is going on �� https://t.co/Rdq2wh68QO

Pro-family advocates have pointed out that watching a film on an airplane is not a private matter because screens can be viewed by people in the vicinity, including children.