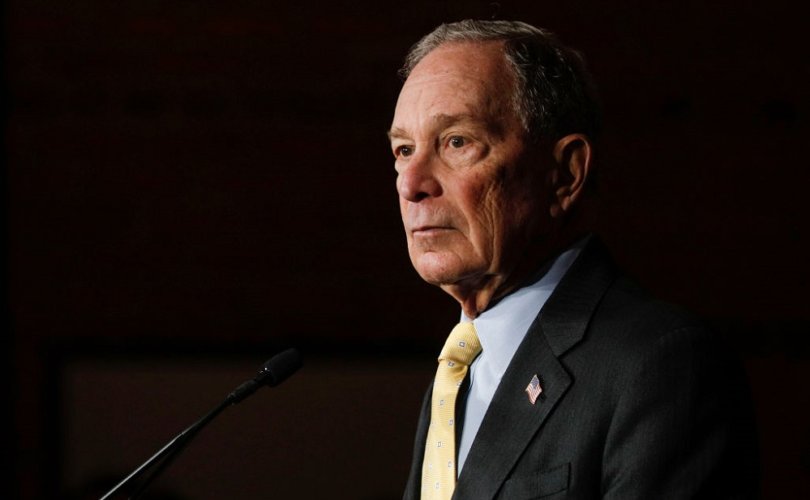 PETITION: Final 2020 Democratic debates must include questions about abortion-infanticide” Sign the petition here.

February 18, 2020 (LifeSiteNews) — A video has surfaced of Michael Bloomberg — now a top contender for the Democratic presidential nomination — suggesting that the U.S. needs to rethink how it allocates medical resources to elderly Americans in need of major medical interventions.

“If you show up with prostate cancer, and you’re ninety-five years old, we should say, ‘Go and enjoy, have a nice day, live a long life. There’s no cure, and we can’t do anything,” said Bloomberg.

“If you’re a young person, we should do something about it,” he said, but “[s]ociety is not willing to do that yet,” hinting that American attitudes toward caring for the aged need to evolve to match his own.

The video was taken while Bloomberg was sitting Shiva with a Jewish family in 2011, engaging in a discussion about how the government should approach dealing with geriatric health issues.

“If you’re bleeding, they’ll stop the bleeding; if you need an X-ray, you’re going to have to wait,” Bloomberg can be heard saying.

Bloomberg explaining how healthcare will “bankrupt us,” unless we deny care to the elderly.

“If you show up with cancer & you’re 95 years old, we should say…there’s no cure, we can’t do anything.

A young person, we should do something. Society’s not willing to do that, yet.” pic.twitter.com/7E5UFHXLue

Resurrecting what Americans feared most about Obamacare: Bigotry against the aged

Bloomberg’s remarks are reminiscent of those of Zeke Emanuel, architect of the Affordable Care Act (ACA), better known as “Obamacare.”

In an article titled, “Why I Hope to Die at 75,” published in The Atlantic, Emanuel said:

Here is a simple truth that many of us seem to resist: Living too long is also a loss. It renders many of us, if not disabled, then faltering and declining, a state that may not be worse than death but is nonetheless deprived.

It robs us of our creativity and ability to contribute to work, society, the world. It transforms how people experience us, relate to us, and, most important, remember us. We are no longer remembered as vibrant and engaged but as feeble, ineffectual, even pathetic.

By the time I reach 75, I will have lived a complete life. I will have loved and been loved. My children will be grown and in the midst of their own rich lives. I will have seen my grandchildren born and beginning their lives. I will have pursued my life’s projects and made whatever contributions, important or not, I am going to make. And hopefully, I will not have too many mental and physical limitations. Dying at 75 will not be a tragedy. Indeed, I plan to have my memorial service before I die. And I don’t want any crying or wailing, but a warm gathering filled with fun reminiscences, stories of my awkwardness, and celebrations of a good life.

“This is the quality of life ethic in action,” wrote Wesley J. Smith at the time. “It is an expression of the increasing bigotry we are witnessing against the aged.”

“The more we learn about Bloomberg, the scarier he gets. Actually, he’s a nightmare,” tweeted James Zogby, managing director of Zogby Research.

The more we learn about Bloomberg, the scarier he gets. Actually, he’s a nightmare.

“This is like the 1,275th thing that Bloomberg said that’s disqualifying,” said one Bernie Sanders–supporter on Twitter.

This is like the 1,275th thing that Bloomberg said that's disqualifying

“I’m Jewish, and I have to say, Bloomberg cannot be president,” tweeted thinkthere4am1.  “These optics are so bad and will increase antisemitic hatred.”

I'm Jewish, and I have to say, Bloomberg cannot be president. These optics are so bad and will increase antisemitic hatred.

Another liberal Twitter user commented, “So Bloomberg wants to actualize the bogus ‘death panels’ Republicans used to say would come with Obamacare.”

So Bloomberg wants to actualize the bogus “death panels” Republicans used to say would come with Obamacare.