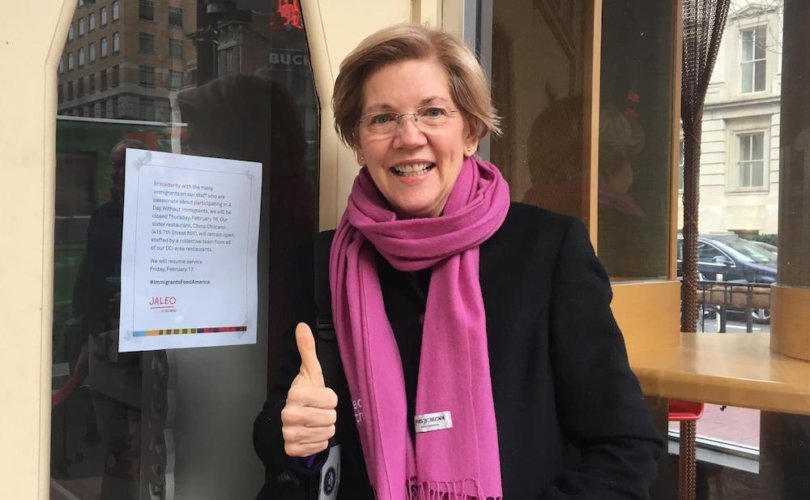 IOWA CITY, December 3, 2019 (LifeSiteNews) – Massachusetts senator and Democrat presidential contender Elizabeth Warren told a crowd during a campaign stop Monday that she intends to signal her solidarity with abortion-on-demand by wearing a pink scarf on inauguration day, should she become the next President of the United States.

“I made the decision when Donald Trump was elected — I decided I would go to the inauguration…but it was important to me what I wore. I'll tell you what I wore: I wore my scarf that has in big letters on it embroidered, 'Planned Parenthood,'” Warren said on the University of Iowa campus, Disrn reports.

“And then the next day I showed up at [the Women's March]; I spoke and I wore my pink Planned Parenthood scarf. Now that's two, so here's my plan for number three: I'm gonna be wearing that scarf when I'm sworn as president of the United States,” she added.

Warren, who rose to prominence as a sharp critic of Wall Street and infamy for her history of falsely claiming Native American ancestry, is an ally of Planned Parenthood who has called abortion safer than tonsillectomies and suggested that late-term abortions can be “act[s] of mercy” for disabled children. During the campaign, she has framed supporting abortion as necessary to being an “ally of women” and refused to acknowledge any cutoff point for legal abortion, which she wants codified by federal law.

Warren’s pink scarf is also part of a broader tradition of what her critics characterize as “woke” virtue signaling. She also displays her “preferred pronouns” on social media as a show of solidarity with transgender activists, and last month declared that “trans,” “nonconforming,” and “non-binary” women of color to be the “backbone” of American democracy.

RealClearPolitics’ polling average of the Democrat primary field puts Warren in third place with 14% of the vote, behind former Vice President Joe Biden at 27% and Vermont Sen. Bernie Sanders at 16%.