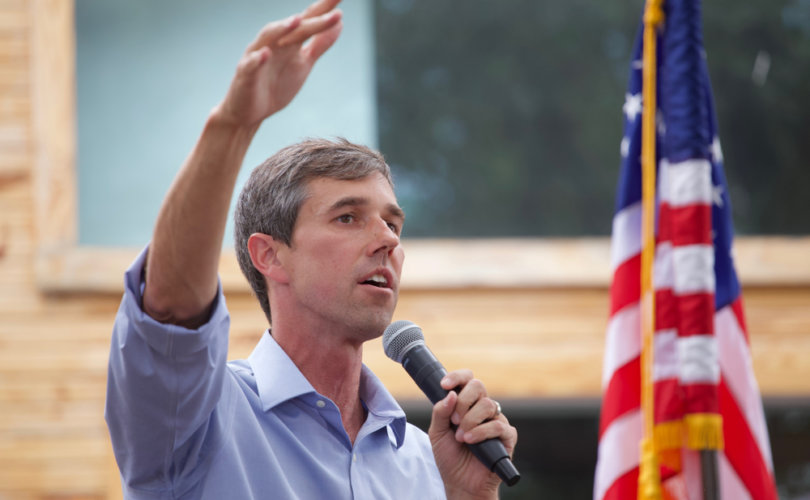 CLEVELAND, Ohio, March 19, 2019 (LifeSiteNews) – Texas Rep. Robert “Beto” O’Rourke, one of the latest Democrats to enter the party’s 2020 presidential primary, confirmed he’s just as uncompromisingly pro-abortion as the rest of the field Monday when he expressed his support for legal elective abortions in the third trimester.

O’Rourke was speaking at a campaign event in Cleveland, Ohio, the Daily Caller reports. An attendee asked him how far he takes his “pro-choice” stance, anticipating how he might respond.

“Are you for third trimester abortions or are you going to protect the lives of third trimester babies?” she asked. “Because, you know, there’s really not a medical necessity for abortion. It’s not a medical emergency procedure, because typically third-trimester abortions take up to three days to have. So you would, in that sense, if there was an emergency, the doctors would just do a C-section. You don’t have to kill the baby.”

The questioner’s overview of the medical necessity is supported by the expert testimony of Dr. Anthony Levatino, an OB/GYN who committed more than 1,200 abortions before converting to the pro-life cause.

“So, the question is about abortion and reproductive rights,” O’Rourke responded, ignoring the subject of medical necessity and the lateness of the abortion. “And my answer is to you is that that should be a decision that the woman makes about her own body. I trust her.” His answer received roars of applause from the audience.

He doubled down on his pro-abortion stance today, saying of late-term abortion, “I think those decisions are best left to a woman and her doctor. I know better than to assume anything about a woman’s decision…when it comes her to reproductive rights.”

At Penn State today, Beto was asked about his defense of third-trimester abortion. He doubled down: “I think those decisions are best left to a woman and her doctor. I know better than to assume anything about a woman’s decision . . . when it comes her to reproductive rights.” pic.twitter.com/3JNecJJni0

“O’Rourke is dramatically out of step with most Americans,” the pro-life Susan B. Anthony List responded via email. “According to recent SBA List polling, 62 percent of voters oppose legislation to allow late-term abortions, even up to the point when a woman is in labor (50 percent strongly oppose).”

Hey @BetoORourke, here's what @WhatToExpect says about preemie babies. Babies at the same age (and younger) than the innocent ones who you refuse to stand up for: https://t.co/JcqK4bhe3U pic.twitter.com/a1LIyaCM3N

As LifeSiteNews has previously covered, O’Rourke has a 100 percent pro-abortion rating from NARAL and a zero percent pro-life rating from the National Right to Life Committee. The Caller notes that in 2017 O’Rourke voted against banning abortion at 20 weeks, and advocated “ensuring that a woman’s right to choose is not compromised by limited access to safe and legal abortion services or family planning help” during his failed 2018 Senate race against Republican Ted Cruz.

O’Rourke also found himself embroiled in a scandal over the weekend when Reuters revealed he had been a member of the hacking group Cult of the Dead Cow, through which he wrote a fantasy essay about running over children with his car and a poem about receiving sexual favors from a cow.

“I'm mortified to read it now, incredibly embarrassed, but I have to take ownership of my words,” O’Rourke responded Friday. Reuters also came under fire for the revelation that its reporter had confirmed the story in 2017, but agreed not to reveal it until after the Senate election.

The rest of the 2020 Democrat field, which includes Sens. Bernie Sanders, Kamala Harris, and Kirsten Gillibrand, is similarly uncompromising in their pro-abortion platforms.