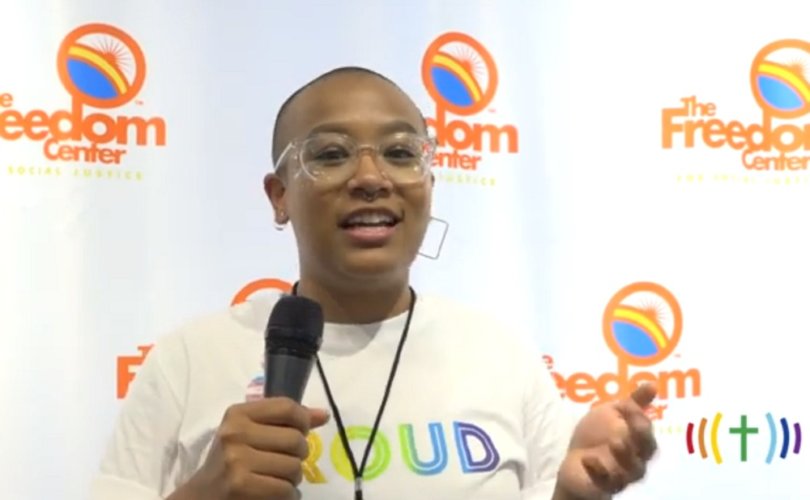 August 20, 2020 (LifeSiteNews) — A “Black-Vietnamese, transgender non-binary/gender-transcendent mermaid Queen-King currently living out their ever-evolving truths in Winston-Salem” spoke at the Democratic National Convention (DNC) during the day on Tuesday.

Fox News’s Tucker Carlson introduced J Mai to the American public, most of whom don’t have access to the daytime proceedings at the DNC.

“You should know that J Mai’s preferred pronouns are ‘they, them,’” said Carlson.  “According to ‘their’ biography at Wake Forest University, J Mai is a ‘Black-Vietnamese, transgender non-binary/gender-transcendent mermaid Queen-King currently living out their ever-evolving truths in Winston-Salem.’”

“Got it?” asked Carlson, who played a video of the black-Vietnamese transgender non-binary/gender-transcendent mermaid Queen-King’s DNC presentation:

“You’re starting to get some sense of why they’re not putting this stuff on TV,” chortled Carlson.

“Democrats and their faithful lackeys the media have been telling you for weeks that none of this is real, you’re imagining it. Democrats don’t really want to take the cops away and leave you defenseless. Yes, they are voting to take billions from police departments across the country, but that’s not really defunding; it’s redistributing,” Carlson explained.

“Not a big deal. Calm down!” added Carlson sarcastically.

“But now J Mai shows up and lets an entire animal shelter of cats out of the DNC’s bag and lets you know that, yes, all your fears are true. We’re doing exactly what you think we’re doing.”

“The gender-transcendent mermaid Queen-Kings are here, and it’s a whole new deal,” snarked Carlson. “Get psyched!”