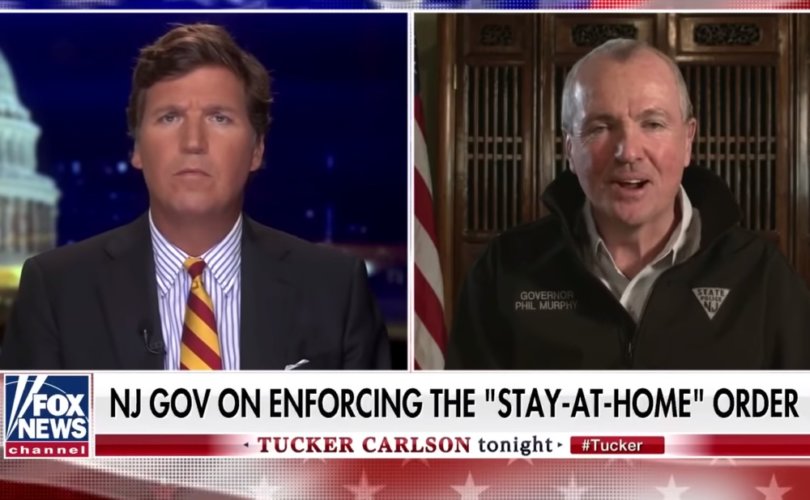 TRENTON, New Jersey, April 17, 2020 (LifeSiteNews) – Democratic New Jersey Governor Phil Murphy revealed in an April 15 interview with Tucker Carlson that he worked closely with Pope-Francis appointed Cardinal Joseph Tobin to make sure priests were not dispensing the sacraments due to the coronavirus.

Murphy explained how he “called up” the Cardinal, who is Archbishop of Newark, when the coronavirus pandemic first made its effects felt in mid-March.

“I said, listen, I’m really concerned about drive-through Holy Communion because we had heard some stories about priests who unwittingly had the virus and unwittingly passed it on to parishioners,” Murphy recounted.

Murphy made his remarks in the context of talking about having to confer with attorneys for everything, but how he was able to simply and unbureaucratically “call up” the Cardinal.

According to Murphy, Tobin declared: “We're not doing that. I promise you. And I’ll confirm that with my fellow bishops.”

Carlson said that “government is not allowed to tell people how to worship,” but did not press the Governor on the issue.

The First Amendment to the United States Constitution guarantees freedom of religion, including the “free exercise” of that religion.

At one point in the interview, Carlson asked Murphy by “what authority” he nullified the Bill of Rights that allows Americans to “practice their religion as they see fit and to congregate together, to assemble peacefully.”

Murphy responded: “That's above my paygrade, Tucker. So, I wasn't thinking of the Bill of Rights when we did this.”

Asked about why liquor stores, as opposed to churches, are not affected by the coronavirus pandemic and allowed to stay open, the Governor argued that shutting down liquor stores would have led to “unintended mental health and addiction prices to pay, unintended consequences.”

He then emphasized that he had “spoken to Cardinal Tobin, to the leaders of the Jewish community, of the Muslim community.”

“People are at peace where we have come out there,” the Governor said. “No one’s happy. Everyone wants to get back to what they think of as the norm, and who could blame them? I want to do that as well.”

On March 12, Governor Murphy had first recommended canceling “all public gatherings” of more than 250 people, “including parades, concerts, and sporting events.” He did not mention religious services.

Then, on March 18, he insisted that “[w]e need all walks of our life, and in this case especially our faith leaders, to adhere to the 50-person maximum requirement in terms of gathering. We must get 100% compliance in our faith communities and around the state.”

During the March 18 press conference, he admitted that “because of these actions, we know that many of our houses of worship at the same time are facing very real challenges, and we pledge to work with them to seek out creative ways to mitigate their pain and ensure their long-term health.”

On the very same day, Cardinal Joseph Tobin announced that “all public celebrations of daily and Sunday Mass will be suspended until further notice.”

Similarly, “all public celebrations of the Sacraments and other public forms of worship are also suspended until further notice. This includes, but is not limited to, previously scheduled Confirmations, celebrations of First Communion, penitential services, Communion services, and Liturgies of the Word.”

According to the website of the Archdiocese of Newark, the decision “was made out of deep concern for the well-being of the faithful and wider community, especially those most at risk of serious illness or death, and in cooperation with statewide mandates.”

“During this challenging time in the life and mission of the Archdiocese of Newark, I ask for your cooperation and leadership as we mobilize the resources and support needed to care for all in our communities. Our Eucharistic fast continues, as we pray for its quick end,” he said.

Three days later, on March 21, Governor Murphy issued Executive Order 107, a stay-at-home order that explicitly listed religious motives as an acceptable reason for citizens to leave their houses. “All New Jersey residents shall remain home or at their place of residence unless they are … leaving the home for an educational, religious, or political reason,” the Governor wrote.

The arrest of 15 Jews at a synagogue in Lakewood, New Jersey, which was brought up by Carlson in the interview, apparently did not take place because it was a “religious gathering.” Instead, the Washington Post reported, police found “60 to 70 people gathered outside the synagogue,” which exceeded Murphy’s “50-person maximum.”

Newsweek summarized the religious exemptions in various states in an article published just before Easter. “New York, the state with the most COVID-19 cases in the nation by far, has not restricted religious gatherings, although the state ‘strongly recommended’ that in-person services not be held. The states with the second and third most cases, New Jersey and Michigan, also include religious exemptions in their stay-at-home orders.”

Tobin lacks credibility among numerous faithful Catholics in the United States. He backs homosexual activists, such as Fr. James Martin, and has personally welcomed an “LGBT Pilgrimage” to his cathedral. He holds that the Church is “moving on the question of same-sex couples.” In 2018, he tweeted, “Nighty-night baby. I love you.” He later deleted the Tweet and claimed it was “meant as a private communication with one of my sisters.” News later surfaced that the Cardinal housed in his rectory a young Italian actor for a period of time.