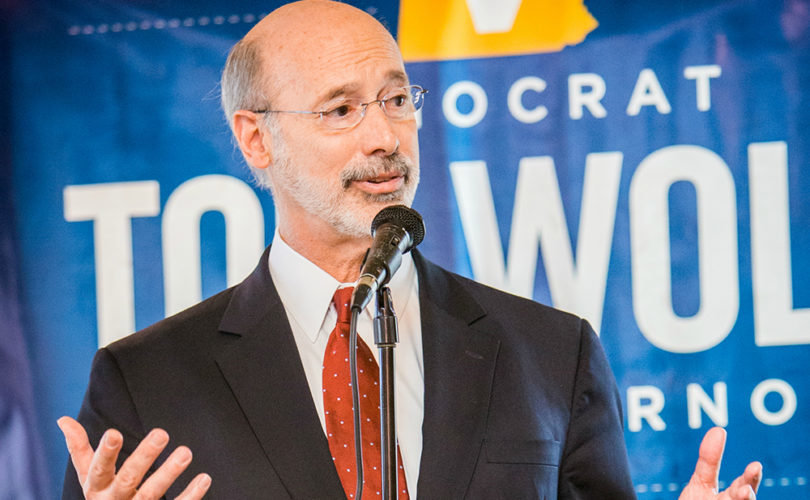 HARRISBURG, Pennsylvania, November 22, 2019 (LifeSiteNews) – Legislation to ban abortions that specifically target children with Down syndrome met a swift end in Pennsylvania Thursday thanks to a veto by Democrat Gov. Tom Wolf.

Passed the day before by the state Senate, House Bill 321 would have prohibited abortions “sought because the unborn child receives a prenatal diagnosis of Down syndrome,” except in cases of rape, incest, or medical emergency.

Down syndrome, or Trisomy 21, is a genetic disorder typically associated with physical growth delays, distinct facial traits, and often intellectual disability. Despite these challenges, a 2011 study published in the American Journal of Medical Genetics found that 99% of people with Down syndrome described themselves as “happy,” and only four percent of parents with children with Down’s expressed regret about having their children.

Calling the bill a “restriction on women and medical professionals [that] interferes with women’s health care and the crucial decision-making between patients and their physicians,” Wolf claimed in his veto message that there was “no evidence that this bill is needed in Pennsylvania.” He said he has “significant concerns that enforcement of this legislation would upend the doctor-patient relationship and impede on patient confidentiality.”

In fact, it is common practice in America and around the world to abort preborn children specifically because of a Down’s diagnosis. It has been estimated that 67 percent of babies in the United States to receive a Down syndrome diagnosis are aborted, 77% in France, 98% in Denmark, 90% in Great Britain, 65% in Norway, virtually 100% in Iceland, and 95% in Spain.

“Governor Tom Wolf believes it’s just fine to kill babies in the womb solely because of a prenatal diagnosis of a disability. That is eugenics. That’s wrong,” Pennsylvania Family Institute president Michael Geer responded in a statement. “And one way Pennsylvanians can respond to Governor Wolf’s veto is by marching with us at the first-ever Pennsylvania March for Life on May 18, 2020. Together, we can tell Governor Wolf and everyone in Harrisburg that life should be protected.”

The bill passed the Senate on a party-line vote but got several Democrats to cross the aisle or abstain from voting in the House. Overriding Wolf’s veto would require flipping an additional seven senators and 19 additional representatives. Wolf does not face reelection until 2022.