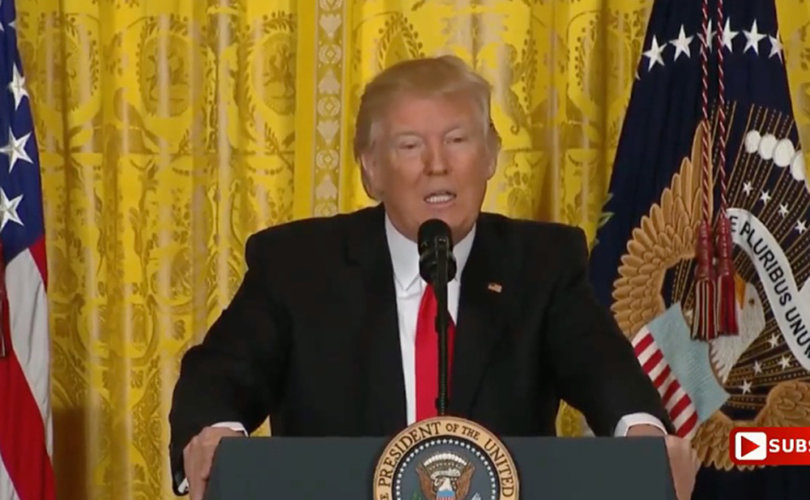 August 5, 2019 (LifeSiteNews) — As the United States reels from a pair of mass shootings in Texas and Ohio over the weekend, a chorus of left-wing voices has emerged to blame the former on President Donald Trump’s staunch rhetoric regarding illegal immigration.

Twenty-two people have died so far in El Paso, Texas after 21-year-old Patrick Crusius opened fire inside a Walmart. Authorities are still investigating whether Crusius is the author of a manifesto circulating online that bemoans both legal and illegal immigration and “fake news,” as well as the “destruction of our environment.”

The next day, 24-year-old Connor Betts murdered nine people, including his own sister, and injured dozens more at a crowded bar in Dayton, Ohio. His motives remain unclear, but his social media history identifies him as a “leftist”; atheist and possible Satanist; Elizabeth Warren–supporter; and, notably, critic of gun availability in the U.S.

“Our hearts are shattered for every family whose parents, children, husbands, and wives were ripped from their arms and their lives,” the president said Monday morning. “In one voice, our nation must condemn racism, bigotry, and white supremacy. These sinister ideologies must be defeated.”

Nevertheless, the left quickly began asserting a link between Crusius’s manifesto and Trump’s vocal opposition to illegal immigration (while largely ignoring Betts’s views), including numerous Democrat presidential candidates (all of whom support aborting preborn children at virtually any point of pregnancy):

Let's be very clear. You use the office of the presidency to encourage and embolden white supremacy. You use words like “infestation” and “invasion” to talk about human beings. We won't truly speak with one voice against hatred until your voice is no longer in the White House. https://t.co/CW3wxxTm2E

Trump has emboldened white nationalism across our country. He needs to go. pic.twitter.com/BvWfPXVxe3

White supremacy is not a mental illness. We need to call it what it is: Domestic terrorism. And we need to call out Donald Trump for amplifying these deadly ideologies. https://t.co/1LRZDZFsdp

If you truly want to be bipartisan, ask McConnell to call the Senate back into session and pass gun safety legislation that Americans are demanding.

“If Mr. Trump did not originally inspire the gunman, he has brought into the mainstream polarizing ideas and people once consigned to the fringes of American society,” Peter Baker and Michael Shear asserted in the New York Times, bemoaning the president’s condemnation of violent gang members as “animals” and claiming that rhetoric about illegal “aliens” who “pour into and infest” the country somehow reflects on immigrants generally or particular races.

NewsBusters notes that ABC, CBS, NBC, CNN, and MSNBC have all pushed the same narrative on their airwaves.

“This claim of Trump’s affinity for ‘white nationalism’ has been debunked as a construct of selective editing of Trump’s remarks after the 2017 Charlottesville rally that left one woman dead,” Frontpage Mag’s Bruce Thornton responded. “The media asserted that Trump characterized the white supremacists protesting the removal of Confederate statues as ‘very fine people’” but omitted “Trump saying explicitly, ‘I’m not talking about the neo-Nazis and white nationalists because they should be condemned totally.’ Trump clarified once again that his comment merely pointed out that just as there were non-violent protestors among the Antifa thugs in favor of removing the statues, there also were nonviolent supporters of keeping them.”

“The admiration of some white nationalists for Trump is no more proof of Trump’s divisiveness than the admiration of al-Qaeda fighters for the Quran is proof of Islam’s divisiveness,” The Federalist’s John Daniel Davidson added. “The difference, of course, is that at least al-Qaeda fighters can point to passages in the Quran that back up their claims, whereas Trump has never once called for vigilante violence in the name of white supremacy or border security, and in fact has repeatedly and explicitly condemned it.”

Amid the partisan rancor, stories of courage and sacrifice have also emerged from the El Paso tragedy.

Glendon Oakley Jr., a 22-year-old Army automated logistics specialist who had been shopping at the nearby mall, pulled his own gun and went toward the Walmart, helping shepherd terrified children to safety. Andre and Jordan Anchondo died shielding their two-month-old baby from harm.