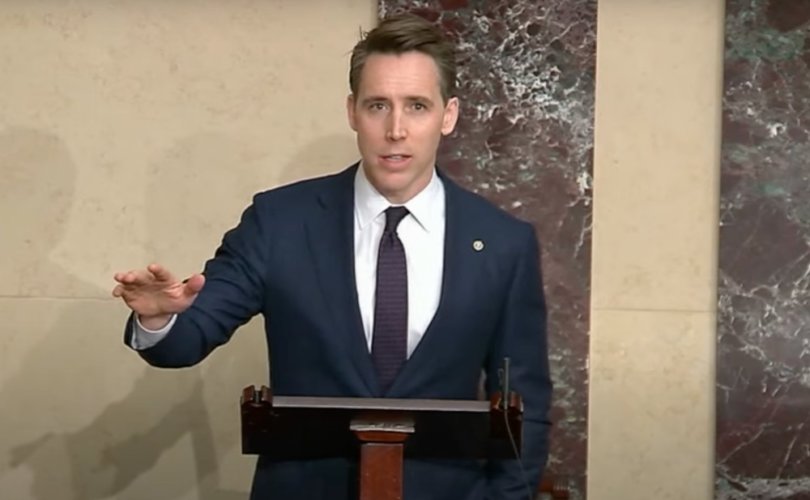 In a Tuesday press release, Hawley’s office stated that after the Missouri Republican went to the Senate floor “to call for unanimous consent to pass” the bill, Durbin “objected and blocked the bill from passing.”

Prior to Durbin’s objection, Hawley explained he was asking for a vote on the bill because “child sex trafficking is an exploding epidemic in my state, and around our country.”

Arguing that it “is shameful” that “the Senate hasn’t acted until now,” Hawley said he is not “willing to sit by and tell the parents of my state that I did nothing. I am not willing to dismiss child exploitation as just some conspiracy theory. I am not willing to abandon the victims of this crime.”

In an April 5 tweet, the Republican senator said Durbin had dismissed the child pornography “crisis” as a “conspiracy theory.”

“And that tells you everything you need to know,” Hawley added.

Introduced March 29, the so-called “Prosecutorial Remedies and Other Tools to end the Exploitation of Children Today Act” (or the “PROTECT Act Bill of 2022”) would implement tougher penalties for people convicted of possessing child pornography.

The bill would amend Section 3553(b)(2) of title 18 of the United States Code to require that individuals convicted of a child pornography offense should receive a sentence “that is not less than the minimum period in the sentencing range,” thereby barring judges from issuing more lenient sentences than those proposed under the Federal Sentencing Guidelines.

In his objection to Hawley’s proposal, Durbin questioned why Hawley was choosing this time to introduce the bill, arguing that while there are “valid questions about sentencing guidelines,” the Republican senator’s timing suggested a move to bolster contentions that Jackson’s sentencing in child pornography cases was “out of the mainstream.”

Last week, Durbin argued that Republican senators were playing “to the QAnon crowd and fringe conspiracy theorists who helped drive the insurrection on January 6, 2021” when they questioned Jackson’s judicial record regarding sentencing for child pornography offenders.

“But this is the first time to my knowledge that the senator from Missouri, or any Republican senator, has tried to enact legislation on the subject. Why now?” Durbin said Tuesday. “Well, I know why.”

In December 2020, the Republican lawmaker introduced the Survivors of Human Trafficking Fight Back Act that would allow victims to sue pornographic websites for making a profit from images or videos of them.

The proposal ultimately died in committee despite receiving a degree of bipartisan support.