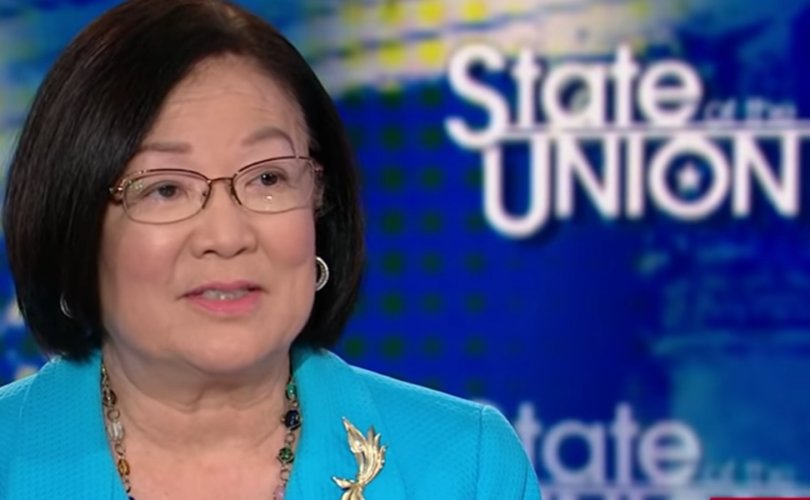 September 24, 2018 (LifeSiteNews) – Judge Brett Kavanaugh’s denials of a sexual assault claim should be doubted because of his judicial philosophy, a Democrat senator told CNN’s Jake Tapper over the weekend.

Shortly before the Senate Judiciary Committee was set to vote on Kavanaugh’s nomination to the Supreme Court, Palo Alto University clinical psychologist Christine Blasey Ford went public to accuse him of attempting to rape her as a drunken teenager at a house party in Maryland.

Kavanaugh has flatly denied the claim, offering to produce calendars showing he was out of town for most of the summer when the party allegedly occurred. Skeptics have also questioned why Sen. Dianne Feinstein, D-CA, waited almost two months to share a letter detailing the allegations and didn’t question Kavanaugh about them during the confirmation hearings.

On Sunday, Tapper invited Democrat Sen. Mazie Hirono of Hawaii, a member of the Senate Judiciary Committee, on his show “State of the Union” to discuss the allegations.

“He’s very outcome-driven, in terms of how he views cases before him, and so I had issues with his credibility and how he went about things way before this even happened,” she claimed, calling for an “independent investigation” into Ford’s claims and praising Ford for “coming forward very bravely.”

Tapper then raised a recent Wall Street Journal editorial that specifically chastised Hirono for declaring that “women like Dr. Ford […] need to be believed.”

A “core tenet of due process is that an accusation isn’t any more or less credible because of the gender, race, religion or ethnicity of who makes it,” the editorial pointed out. “A woman can lie, as the Duke lacrosse players will tell you. Ms. Hirono’s standard of credibility by gender would have appalled the civil-rights campaigners of a half century ago who marched in part against Southern courts that treated the testimony of black Americans as inherently less credible than that of whites. Yet now the liberal heirs of those marchers want to impose a double standard of credibility by gender.”

“I think that this kind of attitude is what makes it really difficult for victims and survivors of these kinds of traumatic events to really come forward,” Hirono responded. “We don’t seem to have come very far from the Anita Hill days.” She went on to add the qualifier “if their stories are credible” to her demand to believe accusers, and claimed Ford’s story met that threshold.

Tapper then cited the fact that all four people Ford claims attended the party (including Kavanaugh himself, a friend of his, and a friend of Ford’s) have denied any knowledge of the events she describes.

“Doesn’t Kavanaugh have the same presumption of innocence as anyone else in America?” he asked.

“I put his denial in the context of everything that I know about him in terms of how he approaches his cases,” Hirono answered, suggesting that his legal rulings somehow indicate either a willingness to lie or an increased likelihood of having attempted rape. “His credibility is already very questionable in my mind and in the minds of a lot of my fellow judiciary committee members, the Democrats.”

“So he comes and, you know, when I say he’s very outcome-driven, he has an ideological agenda as very outcome-driven,” she continued. “And I can sit here and talk to you about some of the cases that exemplifies [sic] his, in my view, inability to be fair in the cases that come before him. This is a person that is gonna be sitting on our Supreme Court, making decisions that will impact women’s reproductive choice.”

“He very much is against women’s reproductive choice,” Hirono declared, “and I can tell you two very important cases in which he applied the same standard but came to two totally different results to make it much harder for women to get this kind of coverage. So there are so many indications of his own lack of credibility.”

Kavanaugh’s true position on abortion remains unknown, but pro-abortion politicians and activists are convinced he will provide the long-awaited fifth vote to overturn Roe v. Wade and let the American people vote directly on whether to criminalize abortion.

Tapper also asked why Hirono and other Democrats haven’t demanded a similar investigation into Minnesota Congressman and Democrat National Committee deputy chair Keith Ellison, whom ex-girlfriend Karen Monahan claims physically abused her in 2016. She agreed that Monahan’s claims should be investigated, but quickly changed the subject back to Kavanaugh.

Liberals such as the New Yorker’s Osita Nwanevu have hailed Hirono as a “moral anchor” for her attacks on Kavanaugh, while conservatives have cited the interview as proof Democrats are smearing the judge for political reasons. Hirono has also lent her signature to a MoveOn.org fundraising email focused on Kavanaugh.

As for Ford, her attorneys have reportedly reached a deal to have her testify before the Senate Judiciary Committee this Thursday. Skeptics previously questioned her numerous objections to testifying, including a lack of preparation time and aversion to flying.