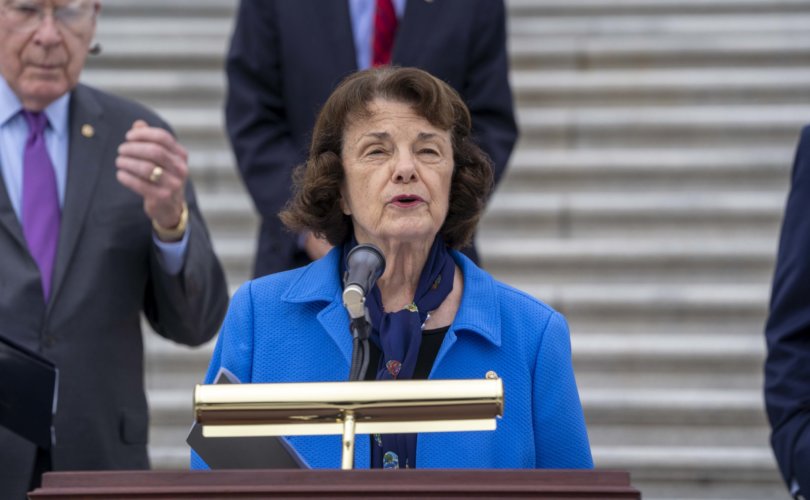 (LifeSiteNews) — A bill proposed by U.S. Sen. Dianne Feinstein of California would prevent unvaccinated Americans from flying home for the holidays unless they show proof of a negative COVID test or official documentation demonstrating prior recovery from SARS CoV-2.

Travelers who have gotten the jab would be forced to show proof of inoculation before boarding a domestic flight.

Failure to comply would result in refusal of boarding.

In a statement, Sen. Feinstein made clear that the proposed measures ought to be enacted ahead of the 2021 holiday season.

“We know that air travel during the 2020 holiday season contributed to last winter’s devastating COVID-19 surge. We simply cannot allow that to happen again,” she said.

We can’t allow upcoming holiday air travel to contribute to another surge in COVID cases. Today I introduced legislation requiring passengers on domestic flights to be vaccinated, test negative or be fully recovered from a previous COVID illness.https://t.co/vVRHM5OiuV

The bill proposes that air travelers be required to present proof of having been “fully vaccinated” against COVID-19 in order to board a flight within the United States, and unvaccinated Americans must alternatively show that they have tested negative no more than 72 hours before their flight or recovered from the virus in the past three months.

According to the proposed legislation, travelers seeking to board a domestic flight must show “documentation demonstrating that the passenger is fully vaccinated” against COVID-19,” as “defined by the Secretary or any successor.”

Unvaccinated Americans must either show “proof of a negative pre-departure qualifying test result for SARS-CoV- 2 or, alternatively, written or electronic documentation of recovery from COVID-19 after previous SARS-CoV-2 infection in accordance with the Centers for Disease Control and Prevention’s testing requirements and applicable guidance.”

Those who wish to prove previous infection and recovery would need to present “a positive test result and a signed letter on official letterhead that contains the name, address, and phone number of a licensed health care provider or public health official stating that the passenger has been cleared for travel.”

Feinstein said that the federalized standards for domestic travel proposed in the bill would align with existing restrictions on international flights to and from the United States.

On September 20, the Biden administration announced that people traveling to the United States from overseas must hand over proof of having been “fully vaccinated” against COVID-19 in addition to presenting a negative test result taken no more than 72 hours before boarding the plane.

The radically pro-abortion senator added that the COVID restrictions proposed in the bill are necessary to protect young children who as of yet are not eligible to get the abortion-tainted COVID jab.

“It only makes sense that we also ensure the millions of airline passengers that crisscross our country aren’t contributing to further transmission, especially as young children remain ineligible to be vaccinated,” she said.

Feinstein’s comments come even as evidence continues to show that children are at extremely low risk of spreading or suffering serious effects from COVID-19, and studies have also shown that young people, especially teenage boys, are at serious risk of developing severe side effects to the experimental COVID-19 drugs, including heart inflammation.

It is unclear whether the bill proposed by Feinstein will have sufficient support to become law.

As reported by SFist, “between the airline industry and Senate Republicans, this seems doomed to fail out of the gate.”

SFist noted that in August, American Airlines CEO Doug Parker told The New York Times’ Kara Swisher that requiring people to show proof of having gotten inoculated with the COVID drug “wouldn’t be physically possible to do without enormous delays in the airline system.”

In a September 13 statement, the U.S. Travel Association also expressed opposition to such a mandate.

Vice president of public affairs and policy Tori Emerson Barnes said the organization “has long maintained that there should be no mandatory vaccination requirement for domestic travel.”

Some airline executives differ, however.

In an interview with NPR on September 10, United Airlines CEO Scott Kirby said that if the government were to issue a vaccine mandate for air travel, the corporation has “prepared ourselves with technology to be able to upload vaccine cards and track that and implement it if the government ever chooses to go in that direction.”

The requirements outlined in Feinstein’s bill mirror recommendations made previously by prominent public health figures, who have continuously called for greater restrictions for unvaccinated Americans.

In August, NIAID director and White House COVID czar Dr. Anthony Fauci said Americans should get the jab if they want to engage in air travel, and former Planned Parenthood president and CNN medical contributor Leana Wen said there is “not a Constitutional right to get on a plane,” and air travel should be dependent upon vaccination status.

Meanwhile, although airlines have not thus far required the jabs for passengers, mandates for airline employees are expected to result in thousands of firings of unvaccinated staff.

Facing termination or financial penalties, many other employees have been pressured into getting the shot.

As reported by The Hill last month, thousands of Delta Air Lines employees were pressured into getting the shot after the company declared it was imposing a $200 monthly healthcare surcharge for unvaccinated workers enrolled in the company’s account-based healthcare plan.

United Airlines was expected to fire upward of 600 unvaccinated employees but as of late last month agreed to delay its deadline pending the preparation of legal documents to justify its policy.