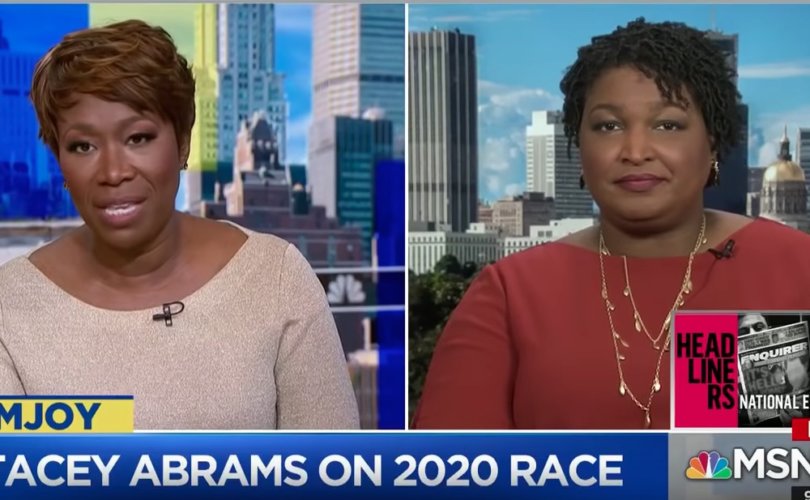 April 9, 2019 (LifeSiteNews) – Democrat Stacey Abrams took the condemnations of an impending Georgia pro-life law to a new level Sunday during an interview on MSNBC in which she claimed it would be “evil” to ban the abortion of babies once their heartbeat has been heard.

House Bill 481 forbids abortions once a fetal heartbeat can be detected except in cases of rape, incest, physical medical emergencies, and pregnancies deemed “medically futile.” It has been passed by both chambers of the state legislature and currently awaits a signature from Republican Gov. Brian Kemp.

Abrams, a former minority leader of the Georgia House who ran unsuccessfully for governor last year, sat down Sunday to discuss the bill with MSNBC’s Joy Reid.

“People are pretty appalled by the fact that he signed what is, I think, the most restrictive anti-abortion bill in the country, so you have some folks that are talking boycott and saying Hollywood should boycott the state of Georgia,” Reid said, Townhall reported. In fact, Kemp has not yet signed HB 481, and its controversial exceptions make it weaker than most heartbeat bills. “What do you make of these calls to boycott the state of Georgia?”

Abrams answered that she doesn’t support the boycott calls by celebrities and entertainment unions because you “re-victimize women in particular when you take away the jobs that have come to the state,” but blasted the fact that “the governor has pushed such an abominable and evil bill that is so restrictive,” as “not only bad for morality and our humanity, it's bad for business.”

Appearing the next day on “Fox & Friends,” former Arkansas governor and Republican presidential candidate Mike Huckabee responded that it was “disgusting, it’s sad, it’s sick” for Abrams to “make this comment that it’s perfectly OK to kill the heartbeat of a baby because it’s good for business.”

“I hope that somewhere among Democrats who even, perhaps believe in abortion, they recognize that the science on this, and they love to talk about science all the time,” Huckabee went on. “Then let’s talk about the science of biology and stop the madness of killing babies with a heartbeat. Surely we’re civilized enough to think that that’s just flat-out evil.”

While abortion advocates continue working to scandalize support for the pro-life measure, the Family Policy Alliance of Georgia (FPAG) sees an opportunity to punish Democrats such as Reps. Mary Williams and Erick Allen in 2020 for opposing it, Patch reported.

“We strive for a Georgia where life is cherished, and the Heartbeat Bill takes a great step toward protecting the most vulnerable among us,” FPAG executive director Cole Muzio said. “These representatives in competitive districts took a position contrary to nearly 70 percent of Americans — that unborn children with beating hearts have value and are worth protecting. We plan to take this message to their districts, identify candidates who will stand on the side of life, and support their candidacies.”

On top of the moral implications of Abrams’ attack on heartbeat protections, Abrams’ claim to oppose a boycott over the law seemingly contradicts comments she made last month arguing it was “very short-sighted for the business community not to be engaged right now” in rallying pressure against the law.

“(T)he issue here is we do not often tie women’s autonomy to our economics. But they’re directly linked,” she said. “And when women start saying, ‘I’m not moving to Georgia because they have this abominable bill stripping women of autonomy and their choices,’ we will see a result.”

Gov. Kemp is standing by the bill, declaring that it “reaffirms our priorities and who we are as a state,” and that “I can’t govern because I’m worried about what someone in Hollywood thinks about me. I ran the last two years on these issues, and I got elected with the largest number of votes in the history of the state of Georgia, and I’m doing what I told people I would do.”