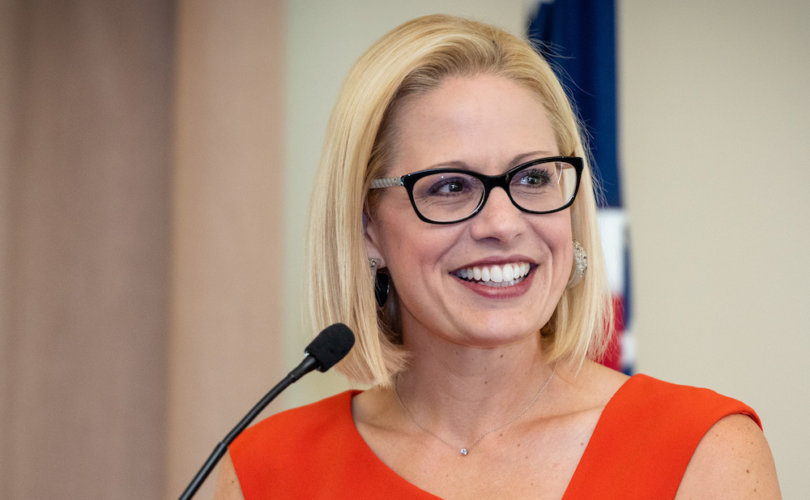 ARIZONA, October 22, 2018 (LifeSiteNews) – Rep. Kyrsten Sinema, the Arizona Democrat currently running for an open seat in the U.S. Senate, is in hot water for a recently-unearthed 2006 interview disparaging stay-at-home mothers, the latest in a string of embarrassing quotes from her past.

Sinema, an open bisexual backed by a population control group which has advocated “tax[ing] to the hilt” families that engage in “irresponsible breeding,” suggested in a 2006 interview with the nightlife magazine 944 that women who choose to be full-time homemakers or mothers have nothing to be proud of.

“These women who act like staying at home, leeching off their husbands or boyfriends, and just cashing the checks is some sort of feminism because they’re choosing to live that life,” Sinema said, The Federalist reports. “That’s bulls***. I mean, what the f*** are we really talking about here?”

At the time, Sinema responded to critics by claiming it was merely a sarcastic joke that didn’t reflect her true feelings. Later pieces in the Washington Post and Phoenix New Times summarize her explanations for the snafu as a “failed attempt at humor” in an interview “meant to be an over-the-top Daily Show-type spoof.”

Whatever Sinema’s intentions may have been, her words echo a strain of genuine antipathy toward stay-at-home mothers within modern feminism. PJ Media’s Faith Moore quotes author Linda Hirshman arguing that women who don’t work outside the home risk “perpetuating a mostly male ruling class,” and the Daily Telegraph advocating a “legal requirement that all parents of children of school-age or older are gainfully employed.”

Even the European Union has identified women “who are inactive or work part-time due to personal and family responsibilities” as a “social challenge.”

“A leech is generally one who sustains itself by taking, not giving,” a stay-at-home mom quoted by Moore responded on social media. “A stay at home mom is one of the hardest working people in the world, and gives so much of herself to her home and family…not the definition of a leech.”

This is only the latest in a series of old quotes that has hounded Sinema’s campaign over the past few weeks.

Previous examples include a 2010 speech in which she joked that Arizona “is clearly the meth lab of democracy”; a 2003 email inviting “feminist witches” to attend an anti-war rally; a 2003 interview in which she told a left-wing radio host “I don’t care if you want to” about Americans joining the Taliban; and a 2002 email telling left-wing protesters it “would be inappropriate to ask someone to not destroy property or to carry a weapon.”

Sinema, who has a 100% pro-abortion voting record according to Planned Parenthood and NARAL, is running against pro-life Republican Rep. Martha McSally, a retired Air Force colonel and the US's first female combat pilot, for the Senate seat being vacated by retiring moderate Republican Sen. Jeff Flake.

Holding onto Flake’s seat will be critical to the GOP’s goal of preserving and/or expanding its current 51-49 Senate majority. RealClearPolitics’ polling average currently classifies the Arizona race as too close to call, with McSally leading Sinema by less than a percentage point.