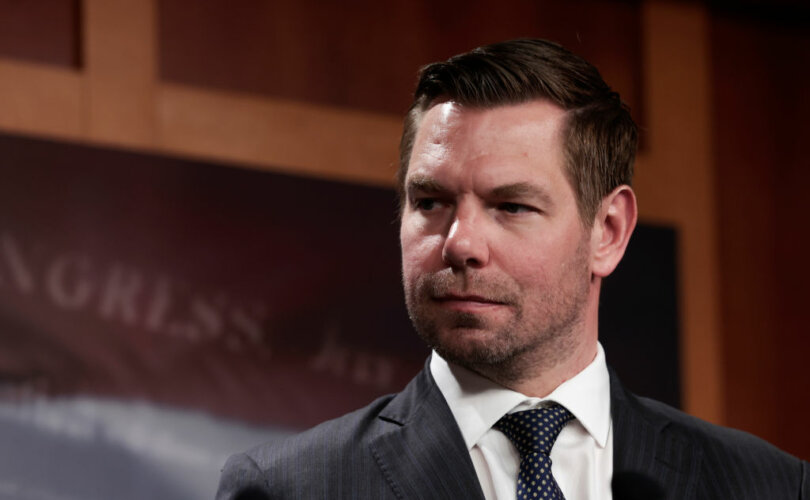 CASTRO VALLEY, California (LifeSiteNews) — A far-left Democratic congressman on Monday released a heavily-produced ad suggesting that pro-life legislation could result in women being arrested at gunpoint in front of their families for having had an abortion.

Conservatives have blasted the ad for mischaracterizing pro-life laws (none currently in effect would prosecute the mother), as well as for accusing conservatives of doing precisely what the pro-abortion Biden administration is doing in utilizing the FBI to arrest pro-lifers like Mark Houck in front of their terrorized families.

Now do pro-life activists being arrested by the FBI https://t.co/WGWsi6RTSe

The darkly-lit video depicts a family with two small children eating dinner together when flashing police lights appear outside the window. Two police officers then show up at the door and inform the mother that they have a warrant for her arrest for the “unlawful termination of a pregnancy.”

After the husband steps in to defend his wife, officers draw their guns on the couple, causing their children to scream and cry in terror. Amid the chaos, the police tell the family they are “just enforcing the law.”

The ad concludes with the woman in the back of the squad car tearfully asking the police not to “do this.”

The provocative commercial has generated outrage among pro-life advocates, who have pointed out that the scenario depicted in the ad has not been advocated by pro-lifers, who have pushed for laws banning abortion and in some cases attaching criminal or civil penalties to abortionists, but not prosecuting mothers.

Kristan Hawkins, founder of Students for Life of America, called on Swalwell to cite his sources, pointing out that “[t]here is not one pro-life law that calls for the prosecution of women for abortion.”

There is not one pro-life law that calls for the prosecution of women for abortion.https://t.co/02oICt8Uks

The Daily Wire’s Mairead Elordi also responded to the ad by joking that “The Handmaid’s Tale fan fic continues.”

Often cited by pro-abortion advocates as representing the world envisioned by pro-life advocates, “The Handmaid’s Tale” is a science fiction novel that depicts a dystopian world in which women are forced to have children.

In addition to slamming the ad’s inaccuracy, conservatives have also pointed out the eerie similarities between the scenes depicted in the ad and the real-life traumatic arrests of pro-life parents who have recently been taken into custody by armed FBI agents in front of their terrified children.

This has never happened. But this is what it looks like when the Biden DOJ shows up at the home of a pro-life activist and arrests him in front of his screaming children.

LifeSiteNews broke the story about the dramatic guns-drawn FBI arrest of pro-life activist and father of seven Mark Houck, who was taken into custody by a team of FBI agents last month as his children watched screaming.

Houck’s wife, homeschooling mom Ryan-Marie, told LifeSite that dozens of FBI agents surrounded the property early in the morning and “started pounding on the door and yelling for us to open it.”

Noting that the agents “had big, huge rifles pointed at Mark and pointed at me and kind of pointed throughout the house,” Ryan-Marie said “the kids were all just screaming. It was all just very scary and traumatic.”

Not long after Houck’s arrest, pro-life activist Paul Vaughn, a married father of 11, was also arrested by the FBI in front of his terrified children.

In an interview with Tucker Carlson on October 10, Vaughn said when the FBI came to his house some of his children were just heading to the car to go to school. As recounted by Vaughn, one of the FBI agents “goes to the kids and holds the kids with a long gun outside of my driveway and does not let them go into the house.”

Vaughn was one of the 11 pro-life activists who were hit with federal charges earlier this month for their involvement in a peaceful 2021 pro-life rescue at a Nashville, Tennessee abortion facility, which has since been forced to stop committing abortions to comply with current state law.

Responding to Swalwell’s ad in a Tuesday tweet, Daily Signal journalist Mary Margaret Olohan said the scenario depicted in the commercial shows “what it looks like when the Biden DOJ shows up at the home of a pro-life activist and arrests him in front of his screaming children.”