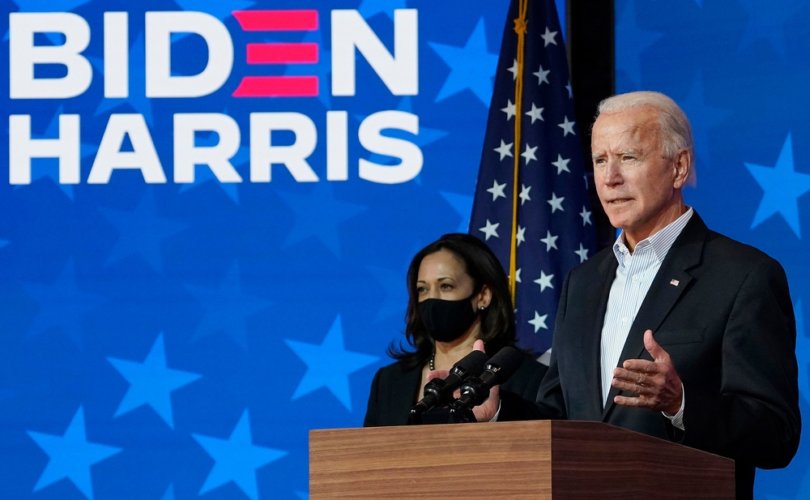 February 24, 2021 (LifeSiteNews) – Following the announcement that the radical pro-abortion and pro-LGBT Equality Act will be brought before the U.S. House of Representatives this week, pro-life and pro-family leaders have described the proposed legislation as “the most comprehensive assault on Christianity ever written into law.”

Dr. Bill Donohue, Ph.D., president of the Catholic advocacy group Catholic League, said that, contrary to U.S. House Speaker Nancy Pelosi’s claim that the Equality Act is “about ending discrimination,” that in fact the opposite is true, with Christians set to experience severe discrimination should the act be passed into law.

Donohue explained that, as well as amending the 1964 Civil Rights Act “to include sexual orientation and gender identity to the definition of sex,” a thing never intended or envisioned by the authors of that legislation, the Equality Act would “undermine the Religious Freedom Restoration Act by allowing gay rights to trump religious rights.”

Donohue said that the act’s broad scope would force healthcare providers to supply hormone therapies and even surgeries in accordance with “sex change” procedures.

Women’s sports, too, will become unfairly altered by the inclusion of boys and men who purport to be female. “These biological males can use the locker rooms, restrooms and shower facilities that have always been reserved for females,” he added.

But for Catholics and members of other religious groups who hold to a traditional understanding of human nature, they “could not raise religious liberty objections to any of the aforementioned rights of transgender women. In effect, religious entities would be secularized,” Donohue warned.

As an example, Donohue explained that “if the Equality Act were to become law, Catholic foster care programs would be shut down. They would either have to agree to allow two men to adopt children—a clear violation of Church teachings—or lose federal funding.”

Additionally, Catholic hospitals would lose any federal funding they receive under the proposed Equality Act if they refuse to perform abortions, “or be forced to get into the abortion business.”

“This is the kind of ‘gotcha’ type element that makes this bill so pernicious,” Donohue said.

“The Equality Act is a grave and treasonous threat to our nation's core values contained in our First Amendment. The fact that no Republicans have co-sponsored it, even those who co-sponsored in the previous Congress, underscores the Democrats' lurch to the Left. This is a radical bill that uses the government to control, through coercion, how every American thinks, speaks, and acts on issues of human sexuality. It may be named the Equality Act, but as the details make quite clear, the only equal thing about it is how much damage it does to many facets of American life,” Perkins said.

“The bill erodes parental rights and positions the government as lord over churches and other faith-based institutions, potentially dictating how their facilities are used, who they hire, and even punishing them for not falling in step with a view of human sexuality that directly contradicts orthodox biblical teaching,” he continued.

“No person of faith or religious institution, whether school, church, synagogue, mosque, business, or non-profit, will escape the Orwellian reach of the Equality Act,” Perkins warned.

Mary Beth Waddell, FRC's Director of Federal Affairs for Family and Religious Liberty, commented that the bill “politicizes the medical profession and denies biological reality, harming those it claims to protect.”

“In addition to obliterating the rights, privacy, and safety of women and girls, this extreme bill would politicize the medical profession, forcing doctors who provide legitimate hormone treatments and surgical procedures to offer those treatments against their conscience. It would put the threat of litigation over every medical professional who would dare to stand up for the science that indicates the harms of these treatments and surgeries, likely causing many to stay silent. The misnamed 'Equality Act' has no place in any just, fair, and tolerant society.”

Lila Rose, Founder & President of Live Action, described the Equality Act as “deceptively named and corrupt in its vision.”

“There is nothing empowering or ‘equalizing’ about killing innocent preborn children nor confusing what it means to be male and female. This deceptively named piece of legislation hides within it policies that override conscience rights, require employers to cover abortions in their healthcare plans, and nullifies pro-life laws and protections on a massive scale,” Rose said.

“It isn’t drafted as a shield to protect vulnerable minorities from unjust discrimination, but as a sword to persecute those who do not embrace new sexual and gender ideologies.”

Anderson cautioned as to the effect the act would have on religious agencies, like schools and adoption firms, warning that, if the act passes, they “would face federal sanction for operating according to basic biology and mainstream biblical teaching on sex and marriage.”

Anderson’s colleague and EPPC Fellow Erika Bachiochi, J.D., a legal scholar specializing in Equal Protection jurisprudence, criticized the bill as an attempt to “transform the great Civil Rights Act of 1964 into a mechanism for public funding of abortion.”

“But taxpayer funding of abortion — deeply unpopular among Americans — would only further incentivize employers to prefer abortion for their pregnant employees over far more costly accommodations for parenting,” Bachiochi said.

Andrew T. Walker, Ph.D., a scholar in EPPC’s Evangelicals in Civic Life criticized Biden in particular, whose “appeal to unity and moderation” he described as merely “a shallow political ploy.”

“This bill targets goodwill people of faith by making historic and reasonable claims about gender and sexuality suspect and ripe for exclusion from the public square,” he said.

The American Principles Project (APP), a national organization for pro-family advocacy in public policy, have released a scathing review of the impact of the Equality Act, recommending that Congress oppose the legislation on multiple grounds.

“Of course, this has been their goal for a long time, and we know by now the very terrible consequences which will occur if the ‘Equality’ Act passes: female athletes will be forced to compete against biological males; women will be forced to share private spaces like bathrooms, locker rooms, and shelters with men; and religious charities will be coerced into violating their beliefs or else be shut down.”