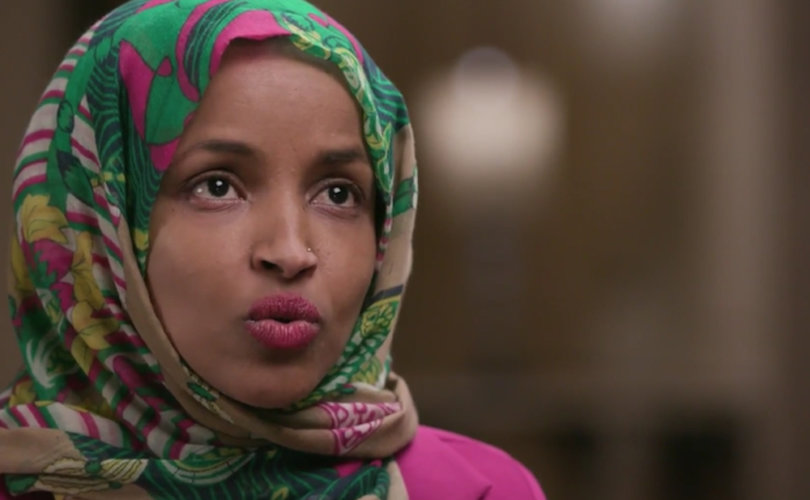 WASHINGTON, D.C., May 24, 2019 (LifeSiteNews) — Democrat Rep. Ilhan Omar of Minnesota took to the House floor this week to deliver a tirade about pro-life legislation sweeping the country, accusing pro-lifers of acting on ulterior motives and not truly caring about children’s lives.

Omar was speaking out in response to Alabama’s new near total abortion ban and Georgia’s new heartbeat-based abortion ban, which activists on both sides see as potential threats to Roe v. Wade. Numerous Democrats, including the 2020 presidential primary field, have issued sweeping condemnations of pro-lifers’ efforts and pledged to ensure that whatever happens to Roe, states will still be blocked from passing pro-life laws.

“Religious fundamentalists are currently trying to manipulate state laws in order to impose their beliefs on an entire society, all with complete disregard for voices and the rights of American women,” she said. “The recent efforts like those in Alabama, in Georgia, are only the latest in a long history of efforts to, to punish us when we don’t conform to their attempts to control us.”

Rep. Ilhan Omar (D-MN) attacks conservative people of faith on the House floor, suggests that their concern for unborn babies is not genuine and they are hypocrites pic.twitter.com/XGiWwB51GV

“Let’s just be honest: for the religious right, it isn’t simply about their care or concern for life,” Omar claimed. “If they cared about or were concerned about children, they would be concerned about the children that are being detained and those that are dying in camps across our borders. Or the children who are languishing in hunger and facing homelessness.”

Omar may have been referencing a story highly publicized last fall about the dehydration death of a seven-year-old girl in Border Control custody. Many of the Trump administration’s political foes promoted the impression that the child died due to government officials’ negligence or mistreatment, but the girl had actually died after traveling for days without food or water with her father, who falsely told the authorities she was well when they were detained.

“This isn’t about religious morality or conviction,” she continued, “because we’ve seen time and time again, those that talk about their faith and want to push policies because of their faith, are the ones that are simply caught with the hypocrisy of not living it out in their personal lives.”

Housing and Urban Development secretary Dr. Ben Carson referenced Omar’s pro-abortion stand in replying to an unrelated criticism she had leveled at him, tweeting that as a prenatal surgeon, he has demonstrated his care for “all people, even those she doesn't recognize as having a right to life”:

Since you brought it up… I know what it's like to actually be sleepy, especially after 18-hour surgeries and operating on babies in the womb. I hope @IlhanMN knows I care about all people, even those she doesn't recognize as having a right to life. https://t.co/BRl3ibSKM3

A Muslim congresswoman, Omar is controversial beyond her home state primarily for comments critics have characterized as anti-Semitic. But she has also been a dutiful ally of the Left’s social agenda, from promoting false claims about the Covington Catholic students at the March for Life to demanding an investigation of USA Powerlifting for barring gender-confused men from women’s athletic events.