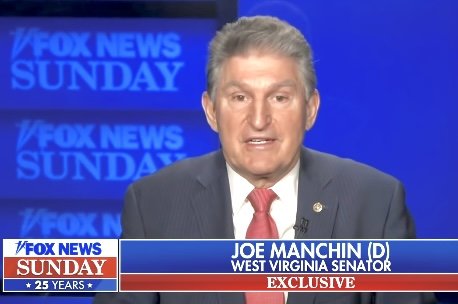 WASHINGTON, D.C. (LifeSiteNews) — West Virginia Democrat U.S. Sen. Joe Manchin dashed the hopes of his colleagues by announcing that he will not support the multi-trillion “Build Back Better” bill.

He cited the ongoing inflationary pressures and mounting national debt as reasons to oppose the legislation. The Democrat also considers himself pro-life and previously said he could not support legislation that removes Hyde Amendment protections banning direct taxpayer funding of abortions.

“If I can’t go home and explain it to the people of West Virginia, I can’t vote for it and I cannot vote to continue with this piece of legislation,” Senator Manchin said on Fox News Sunday. He said he had been working with the White House staff to address his concerns but that he was unsuccessful.

“This is a no on this legislation,” Sen. Manchin said.

He also cited the legislation’s potential effects on West Virginia’s coal industry. Manchin said we need “dependability” and need a reliable energy grid, alluding to blackouts in California and Texas. He said he supports investing in “clean energy” and has concerns about our current energy situation.

“We should not have to depend on other parts of the world to give us the energy or be able to hold us hostage for the energy or the foreign supply chains that we need for the products we use every day,” Sen. Manchin said.

The legislation included more than $500 billion for “climate change” programs according to The New York Times.

“The $555 billion for climate change programs is the single largest spending item in the broader bill, and would easily make it the largest climate change law in United States history,” the paper reported. “The centerpiece of the new climate spending is about $320 billion in tax incentives for producers and purchasers of wind, solar and nuclear power, inducements intended to speed up a transition away from oil, gas and coal.”

The legislation would also open the spigot of federal funding for expanding abortions and the LGBT agenda.

“The legislation includes billions of dollars to expand Obamacare and to subsidize health insurance plans to cover abortion,” LifeSiteNews previously reported. “Nowhere does the bill have Hyde protections in it, which means funding for programs such as nursing education and public health could train people on how to commit abortions or pay for them.”

This would apply to the $30 million set aside for telehealth expansion – the money could theoretically be used to expand access to RU-486 telemedicine abortions, since there are no Hyde protections attached to the legislation.

It would also harm religious charities that operate childcare centers, according to Alliance Defending Freedom.

The legislation would extend federal nondiscrimination rules to child care centers that are recipients of taxpayer dollars under the legislation. The language would also put the federal government, not the states, in charge of many taxpayer-subsidized daycare programs.

This is because the funding stream would have Title IX protections attached to it, and the White House has redefined protections based on “sex” to include “gender identity” and “sexual orientation.”

“The provisions of most obvious concern include nondiscrimination provisions related to sexual orientation and gender identity that could create religious freedom issues for religious providers,” the executive director of the Florida Conference of Catholic Bishops warned.