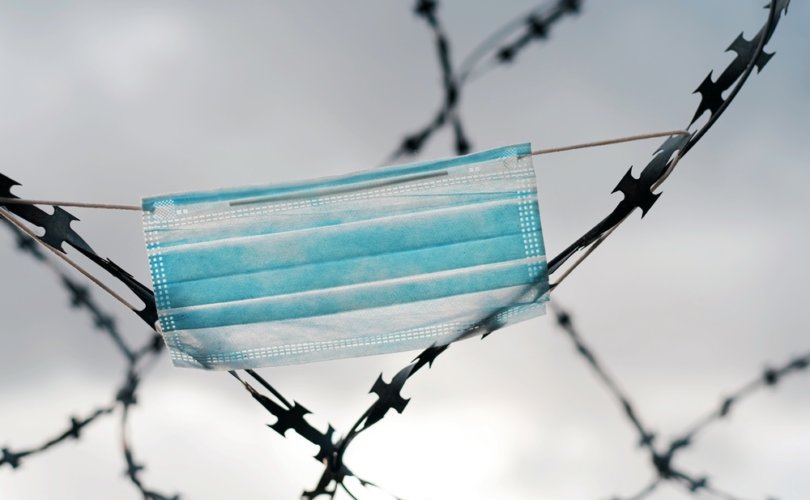 LILLINGTON, North Carolina (LifeSiteNews) — A trial judge in North Carolina incarcerated a would-be juror for 24 hours for refusal to wear a COVID-19 face mask, despite the fact that neither state nor courthouse rules required him to have a face covering.

Fox News reported that Gregory Hahn, a Navy veteran called to Harnett County Courthouse for potential jury duty, says he was singled out among 98 potential jurors during roll call when he “made eye contact with the clerk, and she said, ‘I need you to come over here for not wearing the mask,’” because Democrat-nominated Judge Charles Gilchrist had personally required masks.

“We were in [an assembly room] for about 20 to 30 minutes, shoulder-to-shoulder, with three-quarters of us not wearing masks,” Hahn told Fox News’s Tucker Carlson. “So the virus – if there was virus out there – contaminated us anyway.”

He says he argued to Gilchrist that there were no state or county-level mask mandates in effect, but the judge warned him he would be in contempt of court for refusing to wear one, punishable by up to a $500 fine and 30 days in prison. Hahn refused and was ordered to be held for 24 hours at the Harnett County jail.

“I asked to be excused since I wasn’t even selected for jury duty yet; it was still orientation,” Hahn recalled. “He could have exempted me. There was 98 people that showed up for jury duty and I thought I was just going to be in a holding cell for 24 hours.” Instead, he experienced “the worst 24 hours of my life,” during which he was denied the opportunity “to make a phone call to my minor child who is home,” and at one point even placed in solitary confinement.

Carlson quipped that Gilchrist “sounds like a complete lunatic,” and that Hahn “would have been better just selling fentanyl to children.”

George Washington University law professor Jonathan Turley noted that a district court order applying to the North Carolina judicial system indicates that the decision to mask in courthouses resides with individuals and makes no mention of individual judges having the power to supersede their discretion.

“Courts must decide if judges should be able to depart from those guidelines in the imposition of a mask mandate on a courtroom-by-courtroom basis — or whether the court as a whole should decide such public health guidelines,” Turley wrote.

Early in the COVID pandemic, the federal government recommended wearing face coverings in the presence of others, advice that many states and localities used to impose mask mandates on a wide range of public gatherings. But evidence has long since shown that masking was largely ineffective at limiting the spread of the virus.

Among that evidence is the U.S. Centers for Disease Control & Prevention’s (CDC’s) September 2020 admission that masks cannot be counted on to keep out COVID when spending 15 minutes or longer within six feet of someone, and a May 2020 study published by the peer-reviewed CDC journal Emerging Infectious Diseases that “did not find evidence that surgical-type face masks are effective in reducing laboratory-confirmed influenza transmission, either when worn by infected persons (source control) or by persons in the general community to reduce their susceptibility.”