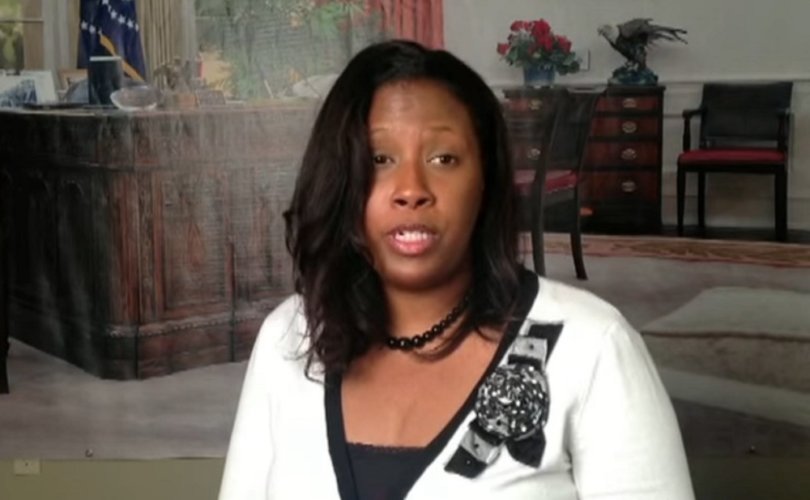 WASHINGTON, D.C., January 24, 2020 (LifeSiteNews) — Louisiana Democrat state Sen. Katrina Jackson urged attendees at the March for Life to put aside partisan differences and unite in the fight to protect babies and mothers from abortion.

The 42-year-old African-American lawyer who has described abortion as a “modern-day genocide” also asserted that pro-life advocates are gaining ground.

“I tell people all the time that this decade will mark the major fight for life,” Jackson told the hundreds of thousands of cheering pro-lifers who packed the Washington Mall for the 47th annual March for Life on Friday.

“Because at this time we’re about to turn the situation around. I see the bands and the chains dropping off of Roe v Wade, I see people and babies born everywhere, I see us celebrating us life like never before,” she said.

“This is the decade that in unity we will fight for life.”

Jackson pointed to her state as an exemplar of bipartisan efforts to defend children in the womb.

Democrat Gov. John Bel Edwards signed a fetal heartbeat bill into law in May that had been passed by bipartisan majorities in both chambers of the Louisiana legislature, including 17 Democrats in the House and seven in the Senate, one of these being Jackson.

Jackson also sponsored the Love Life Amendment that would put a referendum on Louisiana’s 2020 ballot to amend the state constitution to declare no constitutional right to abortion that was passed by the Senate in May, including votes from nine Democrats while five opposed.

Moreover, the Supreme Court is set to hear a pivotal case in March on the Louisiana’s Unsafe Abortion Protection Act.

The bill mandates basic health and safety standards for abortion facilities, notably that abortionists have admitting privileges at hospitals within a 30-mile radius of their facilities. It came into effect in 2014, but since then the abortion industry has obstructed its implementation by ongoing litigation.

In February, the Supreme Court ruled Louisiana could not enforce the law pending a future ruling on the merits of the case.

“Louisiana is the number one pro-life state and you know why? Because in Louisiana the majority of Democrats who are elected are pro-lifers,” Jackson said to enthusiastic cheers from the crowd.

“So Louisiana in this nation is fighting in unity for life, because it’s so important to let people know everywhere that the fight for life doesn’t have a partisan stance to it, but that we love babies,” Jackson said.

“Because life is the most important thing.”

Jackson has decried the disproportionate effect of abortion on black communities, telling NBC, “I think it mitigates our race’s voting power, it hurts our race’s power in the census. I really consider it to be modern-day genocide.”

In 2019, Americans United for Life rated Louisiana third in the nation among states as most favorable to unborn human life. In 2018, abortions fell to their lowest level in a decade in Louisiana.