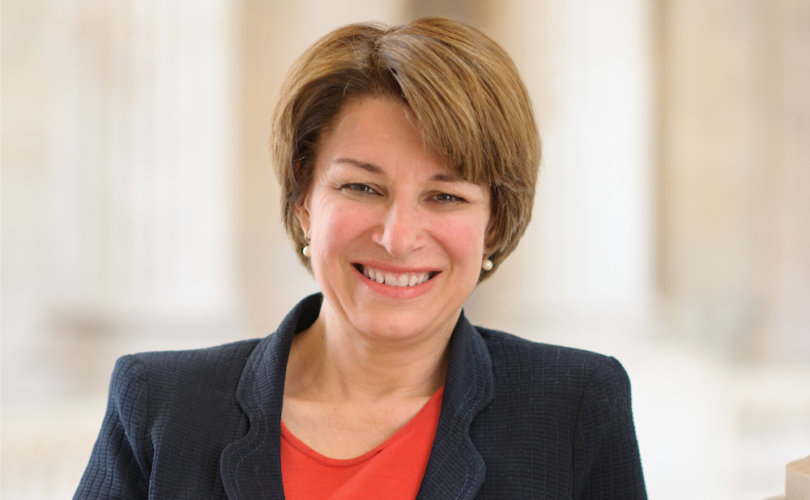 May 9, 2019 (LifeSiteNews) — Sen. Amy Klobuchar of Minnesota, one of the dozen Democrats running for the party’s nomination for president, revived a long discredited talking point about Planned Parenthood Wednesday, falsely claiming that the abortion giant offers mammogram services that would be imperiled if Congress defunds it.

Planned Parenthood does not actually provide mammograms, but only offers standard breast exams that women can perform themselves and referrals to get mammograms elsewhere. Even mainstream fact-checkers such as the Washington Post have been setting the record straight ever since former President Barack Obama claimed in 2012 that Planned Parenthood offers mammograms.

Pro-life groups such as And Then There Were None and Live Action have helped expose the truth by organizing and recording phone calls to various Planned Parenthood locations by women attempting to schedule appointments for mammograms, demonstrating that Planned Parenthood could not meet their requests.

Nevertheless, various pro-abortion politicians and activists have continued to make the claim ever since. Former Planned Parenthood CEO Cecile Richards admitted to Congress in 2015 that “we do not have mammogram machines at our health centers” (while falsely denying that she had ever suggested otherwise).

The difference between rhetoric and reality on Planned Parenthood mammograms is consistent with the broader subject of the abortion giant’s other health services. Planned Parenthood’s annual abortions rose almost 11% from fiscal years 2006 to 2016, while during that same period breast cancer screenings declined 62%, pap tests declined 72%, and prenatal care declined 30%.

During the town hall, Klobuchar also suggested she is open to “limits there in the third trimester” with exceptions for “health of the woman,” but “overall, what we want to do is make sure women have the right…to make their own decisions.” But Minnesota pro-lifers warn that she is as uncompromising on abortion as the rest of the Democrat field.

“Klobuchar has never voted for a pro-life bill or for a restriction on abortion, no matter how modest,” Minnesota Citizens Concerned for Life (MCCL) writes, noting she has voted for taxpayer funding of abortion and late-term abortion. “Klobuchar also co-sponsored sweeping legislation that would have invalidated nearly all limits on abortion, at any stage of pregnancy.” In February, she voted along with the vast majority of her fellow Democrats against a bill that would have required that newborns who survive abortions be cared for and transferred to hospitals.