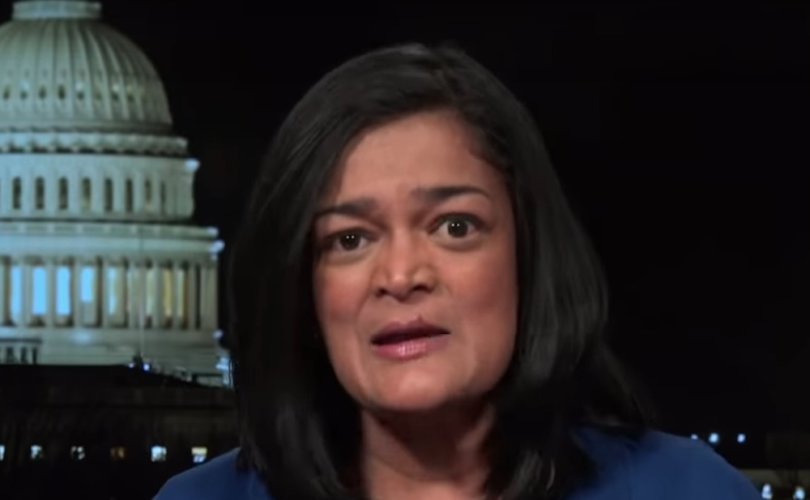 June 14, 2019 (LifeSiteNews) – Rep. Pramila Jayapal, a Democrat representing Washington’s seventh congressional district in the U.S. House of Representatives, revealed she had an abortion Thursday in a New York Times op-ed she says is meant to “humanize” the dehumanization of preborn babies.

Jayapal opens the piece by detailing the premature birth of her now-adult son Janak (who she revealed in April identifies as “gender nonconforming”), which was followed by years of medical scares and intensive treatment.

“Even so, as a new mom taking care of a very sick baby, I struggled mightily,” she writes. “My parents lived across the ocean, and I had no family close by to help. I was experiencing postpartum depression, which went undiagnosed for many years. When I finally did seek help from a therapist, she surmised that I also had a form of post-traumatic stress disorder, given everything I had gone through. My marriage did not survive.”

Years later she remarried, but was told “any future pregnancy would be extremely high-risk and could result in a birth similar to Janak’s.” She eventually got pregnant again, but decided she “could not tempt fate again. It had to be my choice, because in the end, I would be the one to carry the fetus in my body, I would be the one to potentially face another emergency cesarean section, and I would be the one whose baby could suffer the serious, sometimes fatal consequences of extreme prematurity.”

“I decided I could not responsibly have the baby,” Jayapal writes. “It was a heartbreaking decision, but it was the only one I was capable of making.” Her article does not explain why her aborted child didn’t have a right to a chance at survival, address the rights or humanity of preborn babies, or attempt to justify abortion in less strenuous circumstances. It also does not deny that her “baby” was a human being.

“I respect the perspectives of friends of mine who do not believe in abortion and say they would not choose it for themselves. I never try to convince someone that they should share my views on abortion, and I don’t want anyone to try to do that to me,” she claims. “These reproductive choices — especially in situations involving trauma, be it rape or a desperate prognosis for the baby — are deeply private and personal, and should be made only by the pregnant person.”

Using the term “pregnant person” is a nod to transgender ideology, which holds that women are not the only ones who can become pregnant.

“I am deeply concerned about the intensified efforts to strip choice and constitutional rights away from pregnant people and the simplistic ways of trying to criminalize abortion,” Jayapal claims. In fact, many legal scholars who favor legal abortion admit the Constitution doesn’t mandate it be legal, and the current wave of pro-life legislation (like the vast majority of modern pro-life proposals) punish only abortionists.

In a follow-up interview, Jayapal told BuzzFeed she decided to go public because she grew “more and more angry” watching pro-lifers rise up against abortion, and told her story to “help humanize an issue that's been taken over by a lot of white men.”

Last month, Rep. Jackie Speier, a California Democrat, also revealed she had an abortion, calling it “an immensely hard decision.”

Earlier this year, Dr. William Lile, a board-certified OB/GYN and pro-life public speaker, argued that when a baby faces a lethal abnormality, the humane response is not abortion but giving him or her the same “love, the concern, and the care” any born patient would receive. “This is a key concept: the baby in the womb is a patient” even when his or her death is all-but certain, he writes; Jayapal argued for killing a child whose fate could have gone either way.