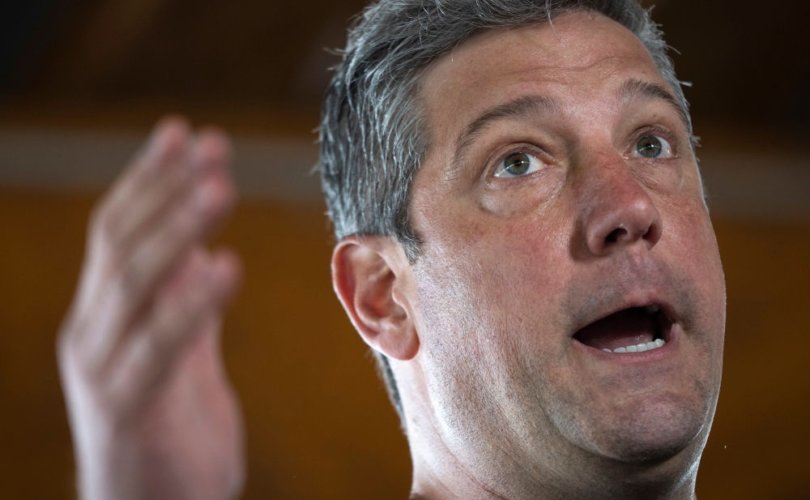 (LifeSiteNews) — Democratic U.S. Rep. Tim Ryan of Ohio contributed to the ongoing characterization of conservatives as threats to national security Tuesday, telling MSNBC that Democrats must “kill and confront” the “extremist” trajectory of the Republican Party.

Ryan, who is Ohio’s Democratic nominee for the U.S. Senate, made the comments during an interview with MSNBC’s Willie Geist. Ryan began by asserting he’s “one of the most bipartisan members of Congress” and someone who “want[s] to work across the aisle.”

Tim Ryan on supposed “extremist” Republicans⁩: “We have to kill and confront that movement”

REMINDER: Tim Ryan, just like his buddy Joe Biden, who he votes with 100% of the time, believes that any Republican who supports Donald Trump is an “extremist.” pic.twitter.com/5IKUZuhpXG

“Look, Democrats aren’t right on everything, and I’m willing to sit down and have conversations about how we can move out of this age of stupidity and into an age of reconciliation and reform, how do we fix all of these broken systems,” he said.

Ryan said some solutions “will come from Republicans,” but “not the extremists that we’re dealing with every single day.”

“We’ve got to kill and confront that movement,” he said, explaining that working with “normal, mainstream Republicans” will be necessary.

Ryan’s comments come after a bevy of left-wing commentators used the anniversary of the September 11, 2001 terror attacks to compare Trump-supporting conservatives with radical Islamic terrorists.

Fox News host Jesse Watters was among many right-wing pundits to highlight the warlike rhetoric in a variety of legacy media interviews.

“The stunning thing to me is, here we are 20 years later and the attack on the symbol of our democracy is not coming from terrorists but it came from literally insurgents attacking the Capitol on January 6th,” Democratic U.S. Sen. Mark Warner of Virginia told CBS’s Face the Nation on Sunday.

“I do worry about some of the activity in this country, the election deniers, the insurgency that took place on January 6th,” he said.

In an interview with NBC’s Meet the Press, Vice President Kamala Harris also affirmed the notion that the U.S. faces a dangerous “threat from within,” and reiterated her oath of office to protect “against all enemies, foreign and domestic.”

Former First Lady Hillary Clinton, who ran an unsuccessful presidential campaign in 2016, said she was “grateful” that Americans came together after the 9/11 attacks, adding she wished Americans could once more set aside differences and confront “extremism of any kind” within the modern political climate.

Speaking to MSNBC, Biden DHS Secretary Alejandro Mayorkas said “the threat landscape” regarding terrorism “has evolved considerably over the last 20 years,” arguing that concerns over “foreign” threats have been replaced by focus on “domestic violent extremists.”

These “domestic violent extremists,” according to Mayorkas, are those who have been “radicalized to violence” by “an ideology of hate, anti-government sentiment, false narratives propagated on online platforms.”

Like Hillary, Biden’s @AliMayorkas also thinks the lesson of 9/11 is to view Trump voters more like al Qaeda:

The heightened rhetoric also follows Biden’s aggressive speech on “the soul of the nation” in Philadelphia earlier this month in which he characterized so-called “MAGA Republicans” as threats to the “very foundations of our Republic.”

“Donald Trump and the MAGA Republicans represent an extremism that threatens the very foundations of our republic,” Biden said, arguing that conservatives “do not respect the Constitution. They do not believe in the rule of law. They do not recognize the will of the people.”

While attempting to say that not all Republicans represent the kind of “extremism” he opposes, Biden also said “there’s no question that the Republican Party today is dominated, driven, intimidated by Donald Trump and the MAGA Republicans.”

“And that is a threat to this country,” he said. “MAGA Republicans have made their choice. They embrace anger. They thrive on chaos. They live not in the light of truth but in the shadow of lies.”

Biden’s comments come despite the fact that left-wing activists, with the support of prominent Democrats and celebrities, waged a months-long assault in the form of violent political protests throughout 2020. Biden also did not comment on mainstream left-wing misinformation that claims that men can become women and that preborn babies are not people.