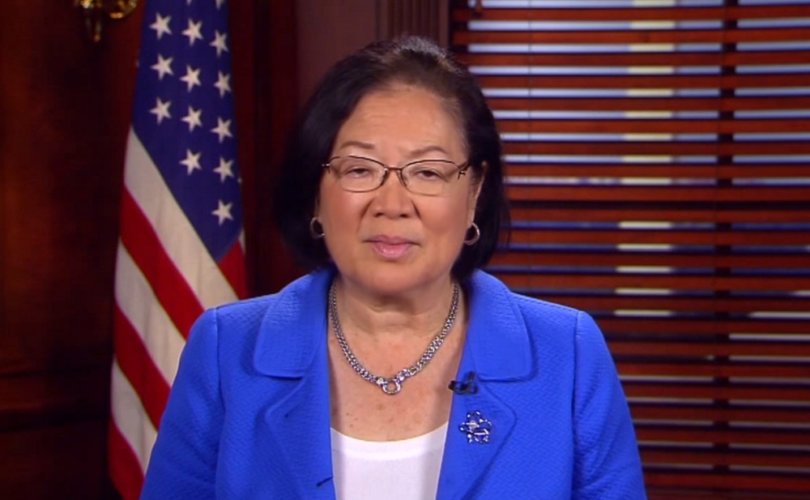 WASHINGTON, D.C., May 23, 2019 (LifeSiteNews) — As part of her remarks during one of many pro-abortion rallies dotting the country on Tuesday, Democrat Sen. Mazie Hirono of Hawaii took the opportunity to boast about delivering a pro-abortion message to children as young as eighth grade.

Tuesday saw more than 400 #StopTheBans rallies across the United States, organized by Planned Parenthood, NARAL, and the ACLU to protest the wave of strong pro-life laws pushed and enacted in various states over the past year, most recently in Alabama and Georgia.

Hirono spoke at the rally that took place outside the U.S. Supreme Court building, during which she relayed an unusual encounter with a group of Hawaii schoolchildren.

I joined activists across our country today to speak out against the nationwide attack on a woman’s constitutional right to an abortion. When our rights are under attack, we must stand up and fight back. #StopTheBans pic.twitter.com/1gJ4XHnkpZ

Here is @maziehirono at the #StopTheBans rally, saying she just told a bunch of 8th grade girls that their abortion rights are under attack. pic.twitter.com/PoaLWD1BaU

“I just met eighth-graders at a public school in Hawaii, and I told them I was coming for a rally in front of the Supreme Court, and they said, ‘Why?’” she told the crowd. “And I said it’s because we have to fight for abortion rights, and they knew all about it.”

The Daily Wire’s Hank Berrien notes that indoctrinating children is a significant element in the abortion lobby’s strategy to protect and expand legal abortion. “It’s going to be a long war, with changing strategies, so we have to teach our children, too, to be vigilant,” Planned Parenthood board member Audrey Bracy Deegan once said, he notes. “The language of choice has to be part of their everyday vocabulary. That way they can’t be silenced without it feeling unnatural. It was the children that were the turning point in the South in the 60s and in Soweto. It has to be the children who are the turning point in the movement if we are ever to gain the momentum necessary to turn back the opposition.”

The story is nothing new for Hirono, who has developed a reputation as one of the Senate’s most unapologetic abortion advocates. In January, she declared that the Catholic Knights of Columbus held an “alt-right” position on abortion and LGBT issues. Last September, she claimed that then-judicial nominee Brett Kavanaugh’s denial of uncorroborated sexual assault claims lacked “credibility” because he was supposedly “against women’s reproductive choice” and the next month refused to answer whether “run[ning] senators out of restaurants, go[ing] to their homes” is “going too far.”