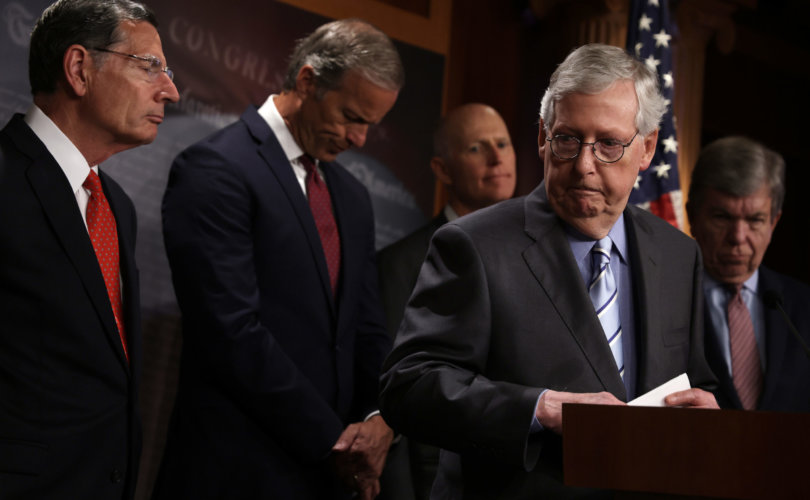 (LifeSiteNews) — Democrat U.S. Sen. Tammy Baldwin of Wisconsin says she has secured enough likely Republican votes to pass a Democrat bill to codify forced recognition of same-sex “marriage” and open the door to federal recognition of polygamy, though only half so far have gone public.

Introduced as part of Democrats’ efforts to stoke fear over the Supreme Court’s overturn of Roe v. Wade, HR 8404 would repeal the longstanding (but unenforced) Defense of Marriage Act, which recognized marriage as a man-woman union in federal law and protected states’ rights to do the same; federally recognize any “marriage” lawfully performed by any state; and force every state to recognize any “marriage” of any other state “between two individuals,” without regard for “the sex, race, ethnicity, or national origin of those individuals.”

Forty-seven House Republicans joined every House Democrat in voting to pass HR 8404, with the blessing of House Republican leaders Kevin McCarthy and Steve Scalise, and Senate Republican leader Mitch McConnell has declined to stake out a public position on the legislation until Democrat majority leader Chuck Schumer announces a decision on bringing it to the floor.

Baldwin, the Senate’s first open lesbian and an opponent of religious freedom, has spearheaded Democrat efforts to court liberal and moderate Republicans, and this week she told Spectrum News they have almost succeeded.

“We have five who have publicly stated that they will be supporting the bill,” she said. “And I have as many who have privately signaled to me or indicated to me that they will support the measure. So we’re very close to the 10 necessary, but frankly, I’d like to have even a few more. So just so we’re certain that when it comes up, it will pass.”

One of the biggest surprises for conservatives was when Sen. Ron Johnson of Wisconsin said that while the bill was “unnecessary” and a Democrat effort to “further divide Americans,” he “see[s] no reason to oppose it.” Spectrum added that Johnson said on the campaign trail this week that same-sex “marriage” is “pretty well settled law,” and if the U.S. Supreme Court was to overturn Obergefell v. Hodges, the 2015 precedent that forced all 50 states to recognize such unions, “you would really disrupt people’s lives.”

Johnson, whose office ignored LifeSiteNews’ request for comment on the matter last week, added to the confusion when he told HuffPost’s Igor Bobic that while he continues to “see no reason to oppose it” (despite outlets such as LifeSite informing his office of the bill’s polygamy implications), he “wouldn’t call [his position] support.” Johnson spokesperson Alexa Henning responded that she was unsure how the answer was puzzling but didn’t elaborate beyond repeating Johnson’s original statement.

“Even though I feel the Respect for Marriage Act is unnecessary, should it come before the Senate, I see no reason to oppose it.”

LifeSiteNews has reached out to Johnson’s office again for clarification, and will update this report upon any reply.