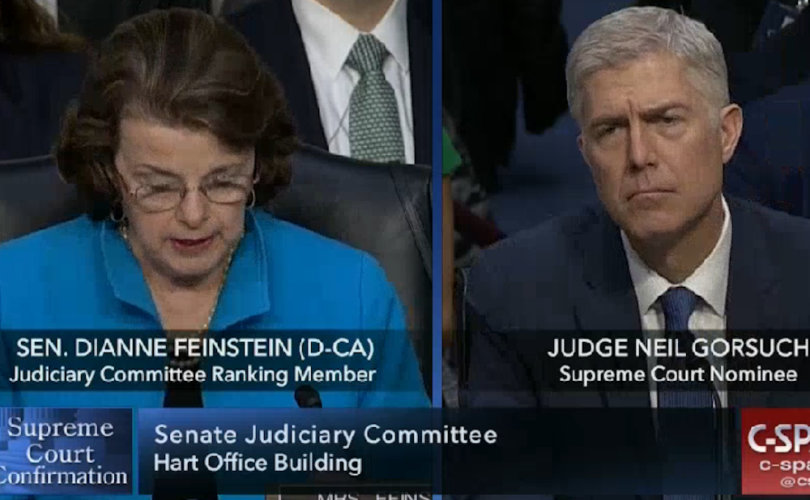 WASHINGTON, D.C., March 20, 2017 (LifeSiteNews) – During the first day of Judge Neil Gorsuch's Supreme Court confirmation hearing, a Democratic senator argued against confirming Gorsuch because of his belief that “the intentional taking of a human life by private persons is always wrong.”

“President Trump repeatedly promised that his judicial nominees would be pro-life, and ‘automatically’ overturn Roe v. Wade,” Sen. Dianne Feinstein, D-CA, said to the Senate Judiciary Committee. “Judge Gorsuch has not had occasion to rule directly on a case involving Roe. However, his writings do raise questions. Specifically, he wrote that he believes there are no exceptions to the principle that 'the intentional taking of a human life by private persons is always wrong.' This language has been interpreted by both pro-life and pro-choice organizations to mean he would overturn Roe.”

Feinstein used words like “baby” and “mother” as she argued that abortion is about “a woman’s fundamental and constitutional right to privacy.”

“Two weeks ago, The Washington Post ran on op-ed written by a woman who desperately wanted to have a baby,” said Feinstein. “She described how she and her husband went to great lengths for four years trying to get pregnant and were thrilled when they finally succeeded.”

Then “tragically, after her 21-week checkup, they discovered her daughter had multi-cystic dysplastic kidney disease,” continued Feinstein. “They were told by three separate doctors that her condition was 100 percent fatal and that the risk to the mother was sevenfold if she carried her pregnancy to term. The mother described their excruciating decision and the unforgiving process the couple endured to get the medical care they needed.”

“President Trump repeatedly promised to appoint someone in the mold of Justice Scalia and said that the nomination of Judge Gorsuch illustrates he’s a man of his word,” said Feinstein. “The Supreme Court has the final say on whether a woman will continue to have control over her own body or whether decisions about her healthcare will be determined by politicians and the government.”