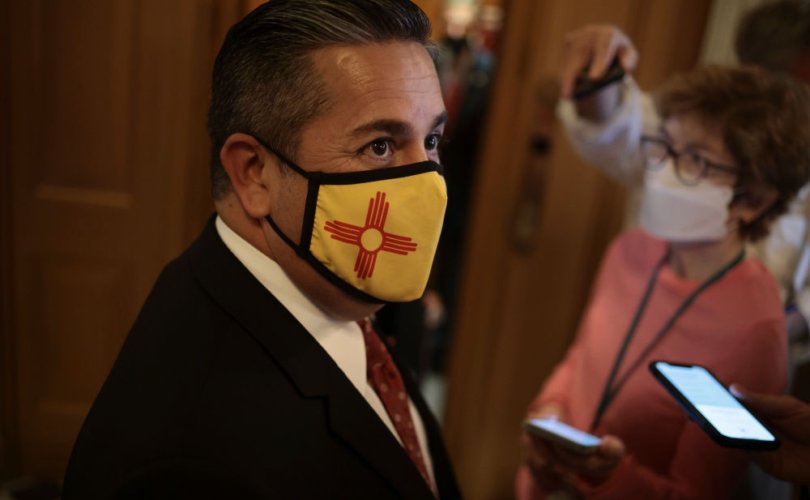 ALBUQUERQUE, New Mexico (LifeSiteNews) — Democratic Sen. Ben Ray Luján of New Mexico was hospitalized and underwent surgery after he suffered a stroke late last week, according to a press release put out by his office on Tuesday.

Though Luján is expected to make a full recovery, his absence could temporarily upset the Democrats’ slim majority in the split U.S. Senate, in which Vice President Kamala Harris would normally be able to act as a tie-breaker in a party-line 50/50 vote.

According to Sanchez, the 49-year-old senator “checked himself into Christus St. Vincent Regional Hospital in Santa Fe,” after which he was “transferred to UNM Hospital in Albuquerque for further evaluation.”

“Senator Luján was found to have suffered a stroke in the cerebellum, affecting his balance,” the press release continued, explaining that “[a]s part of his treatment plan, he subsequently underwent decompressive surgery to ease swelling.”

Sanchez added that the senator “is currently being cared for at UNM Hospital, resting comfortably, and expected to make a full recovery.”

It’s unclear what factors may have caused the 49-year-old to suffer a stroke. The incident has given rise to speculation by some that the stroke could have been connected to the experimental COVID-19 shots Sen. Luján received.

Luján, who is “fully vaccinated,” has been a staunch proponent of universal vaccination against the coronavirus.

In December 2020, the senator tweeted out a photograph of himself getting his first dose of the drug, with a caption telling his constituents: “There is nothing to fear about getting vaccinated to protect yourself from this deadly disease.”

As the first New Mexicans receive the coronavirus vaccine, I have a responsibility to lead by example and show my constituents that this vaccine is safe and effective. There is nothing to fear about getting vaccinated to protect yourself from this deadly disease. pic.twitter.com/1rQDJGbhb6

In November 2021, he tweeted a news story about young children receiving booster shots, urging everyone to get vaccinated and boosted.

Make sure you and your loved ones are protected this holiday season by getting vaccinated and your booster shots. https://t.co/ZzHGZjCqaL

Luján continued his jab advocacy through December, posting several other messages encouraging his followers to get three doses of the experimental drugs.

While no contributing factors have been released regarding Luján’s condition, federal agencies have long been aware of a potential link between some COVID jabs and blood clotting which could lead to strokes.

In April, the U.S. Food and Drug Administration (FDA) temporarily paused the Johnson & Johnson shot due to concerns about “very rare” cases of potentially fatal blood clotting which had occurred in six women shortly after getting the shot.

An advisory committee report on immunization practices for the U.S. Centers for Disease Control and Prevention (CDC) noted in May 2021, that thrombosis with thrombocytopenia syndrome (low platelet) — for which strokes and heart attacks are potential complications — were, in “very rare” cases, potentially linked to certain COVID-19 injections.

As of January 21, 2022, 5,350 reports of thrombocytopenia/low platelet have been reported to the U.S. government’s Vaccine Adverse Event Reporting System (VAERS).

Meanwhile, Sen. Luján’s stroke has immediate political implications which could throw an unexpected wrench in the Biden administration’s legislative plans.

The Wall Street Journal has noted that Luján’s hospitalization and recovery will make “passing any party-line nominations,” up to and “including President Biden’s Supreme Court pick,” more difficult.

President Biden has been given his first opportunity to appoint a Supreme Court justice after pro-abortion Justice Stephen G. Breyer announced his plan to retire late last month.

Biden has drawn controversy for stating that he will appoint a black woman to Breyer’s seat, automatically excluding other potentially qualified candidates. Conservatives have accused Biden of prioritizing racial and gender ideology above judicial suitability, while an ABC/Ipsos poll conducted last week found that 76% of Americans want Biden to consider “all options” rather than select a nominee based predominately on considerations of race and sex.

Sen. Luján is expected to be ready to return to the Senate in four to six weeks.