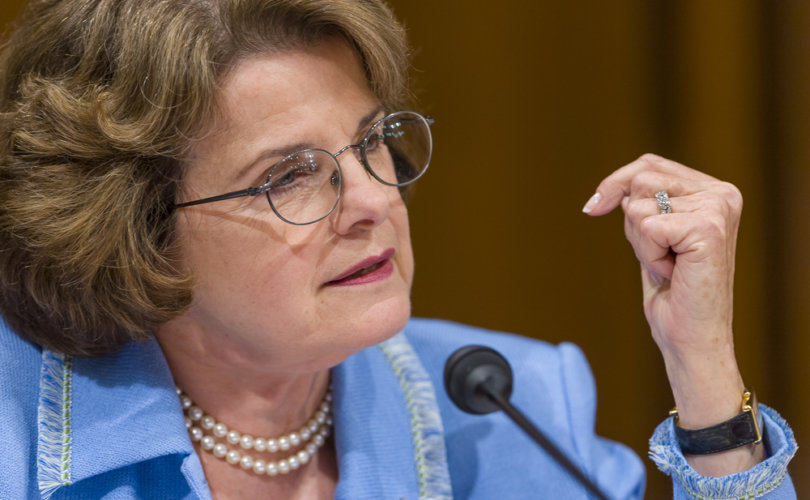 “The dogma lives loudly within you,” Feinstein, D-CA, told Amy Coney Barrett, a mother of 7 whom Trump nominated for the U.S. 7th Circuit Court of Appeals.

“When you read your speeches, the conclusion one draws is that the dogma lives loudly within you,” said Feinstein. “And that's of concern when you come to big issues that large numbers of people have fought for, for years in this country.”

Barrett is a professor at Notre Dame Law School. She has co-authored an article about ethical dilemnas for Catholic judges who oppose the death penalty in certain cases. The paper acknowledged that the Church's teaching on the death penalty is not equivalent to its teaching on abortion, because the Church says abortion is always wrong in all cases.

Barrett has been the target of the left-wing group Alliance for Justice, which released a fact sheet smearing her as a threat to “reproductive rights.”

In October 2015, Barrett signed a letter with other prominent female Catholic intellectuals to the prelates at the Ordinary Synod on the Family expressing “solidarity with our sisters in the developing world against what Pope Francis has described as 'forms of ideological colonization which are out to destroy the family.'”

“We see the teachings of the Church as truth—a source of authentic freedom, equality, and happiness for women,” the letter said. The Church's teachings on human sexuality, human life, and marriage “provide a sure guide to the Christian life, promote women’s flourishing, and serve to protect the poor and most vulnerable among us.”

Pro-abortion Democratic Sen. Dick Durbin also joined in questioning Barrett's faith. “I’m a product of 19 years of Catholic education,” the Illinois senator said. “And every once in a while Holy Mother the Church has not agreed with a vote of mine, uh, and has let me know. You use a term in that article…I’d never seen before. You refer to 'orthodox Catholics.' What’s an orthodox Catholic?”

“What that term was designed to capture, because we were talking about contentious objection, was a judge who accepted the Church’s teaching that the death penalty would be impermissible in” a particular case, Barrett replied.

“Do you consider yourself an orthodox Catholic?” Durbin pressed her.

“I am a Catholic, Senator Durbin,” answered Barrett. “If you’re asking whether I take my faith seriously…I’m a faithful Catholic.”

“I agree with you,” said Barrett.

“Feinstein’s comments this afternoon revealed that anti-Catholic bigotry is still alive in the U.S., even, and perhaps especially, among those leftists who are the first to decry prejudice and discrimination against other minorities,” wrote Alexandra Descantis at National Review.

Senators Durbin and Feinstein weren't questioning a judicial nominee, they were holding a Religious Inquisition with extreme prejudice.

I teach dogma for a living, and can honestly say that even orthodox Catholics aren't nearly so “dogmatic” as secular progressives.

Do you now, or have you ever, held the dogma in your heart?

The dogma lives loudly within me. #sorrynotsorry

Feinstein is out of bounds with this remark. Would she say so to a Muslim judicial nominee? https://t.co/Or8gHoCnWu

Wow. What a rank appeal to anti-Catholic bigotry–& against a nominee who has made clear that judging is not about imposing religious views. https://t.co/2dEfjFkqWr

Aspire to live in such a way that your faith would be scrutinized in senate confirmation hearings.

“The dogma lives loudly within you” is the most beautiful accidental complement I have ever heard.

“dogma lives loudly” is the Catholics' “nevertheless she persisted”

Welp, those “THE DOGMA LIVES LOUDLY WITHIN ME” t-shirts and bumper stickers aren't gonna make themselves.