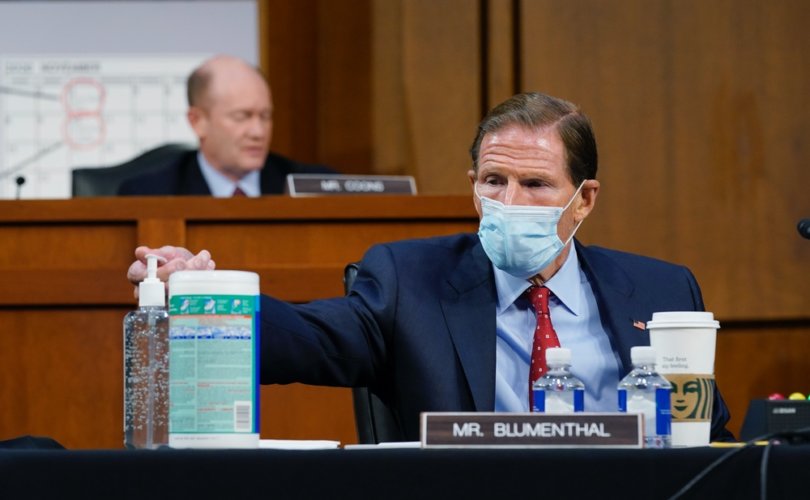 WASHINGTON D.C., October 13, 2020 (LifeSiteNews) – Supreme Court Nominee Amy Coney Barrett, has come under further attack for her pro-life positions, this time on the issue of in vitro fertilization, or IVF.

Sen. Patrick Leahy (D-VT) attempted to draw Barrett on the issue of IVF, by referencing a pro-life ad she signed in 2006. That letter was presented to Barrett as she left church and affirmed the “right to life from conception to natural death.”

However, Leahy continued by recounting that on the back of the signature sheet was an ad, sponsored by the St. Joseph County Right to Life, stating that IVF was tantamount to manslaughter.

Leahy linked Barrett to the views of the ad and challenged her: “Do you agree that IVF is tantamount to manslaughter?”

Barrett was quick to correct the senator, by pointing out that the letter affirming the right to life “was consistent with the views of my church. It took no position on IVF.”

Not content with this, Leahy questioned further, asking if Barrett agreed with the ad that IVF equated to manslaughter.

Once again Barrett corrected Leahy by observing, “I don’t even think that the IVF view that you’re expressing was on that page.”

As with previous questions regarding Roe. v. Wade and abortion, Barrett would not allow herself to be drawn into stipulating her view: “for the reasons I have already stated, I cannot take policy decisions or express my personal view before the committee, because my personal views don’t have anything to do with the way I would decide cases and I don’t want anyone to be unclear about that.”

Later on in the proceedings, Sen. Richard Blumenthal (D–CT) also attacked Barrett on the subject of the letter she signed and IVF. Blumenthal asked Barrett to express an opinion on a recent statement by the St. Joseph County Right to Life which called for the criminalization of “discarding of frozen embryos or selective reduction through the IVF process.”

Barrett pointed out that as she was not a member of the organization, she was not responsible for their views. However, she also observed that “it is not up to me to be in the business of expressing views...now I'm a judge so I cannot publicly express views.”

The grilling continued, with Blumenthal demanding “a clear answer” from Barrett. She replied that nominees for the Supreme Court “can’t answer questions in the abstract…an off the cuff reaction from that would circumvent the judicial process.”

IVF is the artificial process whereby eggs are fertilized by sperm outside of the womb and the thence created embryos are afterwards transferred to the womb. A great number of those smallest of humans die in the process, and many are deliberately killed if they are deemed unwanted or to be predisposed to a disability.

Antonia Tully, of the U.K.-based Society for the Protection of Unborn Children (SPUC), mentioned the staggering number of deaths involved in the IVF process: “Normally in every IVF cycle, tiny human embryos are discarded, with about one in 25 embryos created through IVF surviving to birth.”

SPUC also presented the statistics regarding IVF in Britain, during the year 2017: “In 2017 alone, 174,622 embryos were discarded in the course of treatment, or after they had been taken out of storage.”

Over 1 million embryonic humans are frozen in the United States.