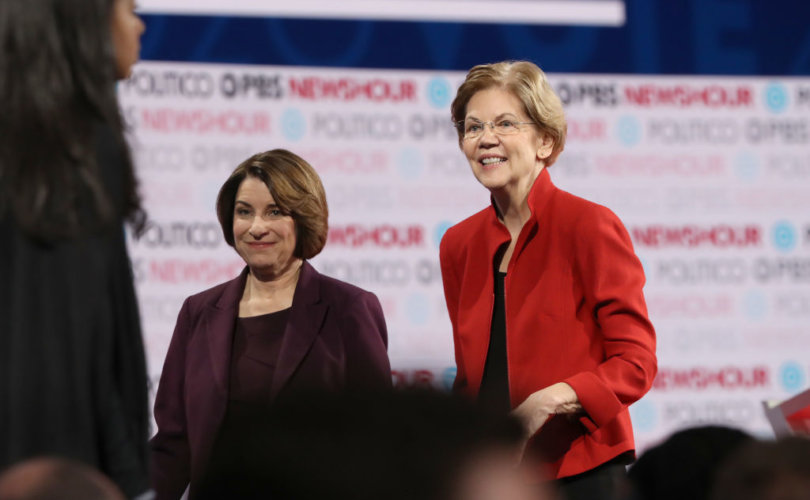 November 20, 2020 (LifeSiteNews) – President Donald Trump is not the first politician to have questioned the security and efficacy of Dominion’s voting machines.

Last year, as part of a probe into the business practices of private equity funds led by Democrat Senator Elizabeth Warren, the three funds (H. I. G. Capital, McCarthy Group, and Staple Steel Capital Group) that own or have investments in the three largest voting machine distributors (Dominion Voting Systems, Hart InterCivic, and Election Systems & Software) were asked to provide the government an account of their business practices.

The Democrat signatories of the Dec. 6, 2019 letters outlined concerns with election security, including known instances of vote changing and malfunctioning. “Election security experts have noted for years that our nation's election systems and infrastructure are under serious threat,” they wrote.

The letter was signed by the Democrat Senators Elizabeth Warren, Amy Klobuchar and Ron Wyden, and Democrat Congressman Mark Pocan.

The revelation of the letters comes at a time when it is a familiar refrain that the Trump team’s contention that Dominion Voting Systems’ machines changed votes on election night are “baseless accusations.” Mainstream news outlets incessantly point to the Joint Statement From Elections Infrastructure Government Coordinating Council & The Election Infrastructure Sector Coordinating Executive Committees, which says, “The November 3rd election was the most secure in American history,” and “There is no evidence that any voting system deleted or lost votes, changed votes, or was in any way compromised.”

Citing their concern that companies owned by private equity funds “implement drastic cost-cutting measures at the expense of consumers, workers, communities, and taxpayers,” Democrat signatories of the 2019 letters went on to detail some of the problems with the voting machines produced by the three major suppliers, writing that “voting machines are reportedly falling apart across the country, as vendors neglect to innovate and improve important voting systems, putting our elections at avoidable and increased risk.”

Most important, they pointed out that there have been recent cases of the machines switching votes or skewing results in a highly improbable direction.

“In 2018 alone, ‘voters in South Carolina (were) reporting machines that switched their votes after they'd inputted them, scanners (were) rejecting paper ballots in Missouri, and busted machines (were) causing long lines in Indiana.’ In addition, researchers recently uncovered previously undisclosed vulnerabilities in ‘nearly three dozen backend election systems in 10 states.’ And, just this year, after the Democratic candidate's electronic tally showed he received an improbable 164 votes out of 55,000 cast in a Pennsylvania state judicial election in 2019, the county's Republican Chairwoman said, ‘(n)othing went right on Election Day. Everything went wrong. That's a problem.’”

Having given this evidence of miscounts and vote switching, the Democrat politicians note that “these problems threaten the integrity of our elections and demonstrate the importance of election systems that are strong, durable, and not vulnerable to attack.”

While the Trump team’s accusations that voting machines across the country were tampered with to skew the vote have yet to be proved in court, the long-standing bipartisan concern with the security and reliability of the machines and their software is reason enough to take the charges seriously.