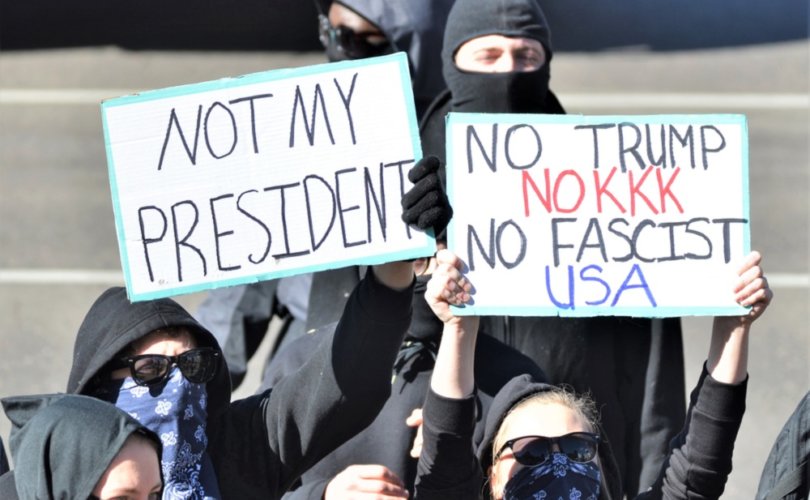 September 18, 2020 (LifeSiteNews) – The various attempts to force President Donald Trump out of office during his first term have all the hallmarks of the sort of “coup” intelligence agencies would engineer to topple hostile foreign regimes, according to former Duke University professor and Trump speechwriter Darren Beattie.

Beattie told Fox News’ Tucker Carlson on Tuesday evening that “what’s unfolding before our eyes is a very specific type of coup called a Color Revolution,” a type of “regime change model favored by many in our national security apparatus, particularly against eastern European countries to overthrow target regimes they don't like.”

The chief characteristic of such a revolution, he said, is a “combination of an engineered contested-election scenario combined with massive mobilized protests, which they call as a term of art ‘peaceful protests,’ and acts of civil disobedience.”

Ever since Trump won the election in 2016, Democrats and left-wing activists have labeled him “illegitimate” and “authoritarian” on a near-daily basis, fueling the push to impeach him that dominated much of last year and ended in failure in February. The far-left groups Antifa and Black Lives Matter (BLM), meanwhile, have organized protests across the country over various forms of “oppression” that allegedly span from countless police departments all the way to the White House.

Many of these protests have turned violent, often provoking a law enforcement response which the Left has in turn framed as an authoritarian vindication of their original claims.

“If that sounds familiar, it gets even better,” Beattie went on. “It’s not only the same strategies and tactics used against Trump as used against eastern European dictators that our national security apparatus doesn’t like. It’s literally the same people, who are Color Revolution professionals, who have a long history of using these same tactics against foreign leaders they don’t like.”

One of the “key figures,” he said, is Norm Eisen, a Democrat operative who was an “ethics czar” in the Obama administration. Beattie calls Eisen “the key architect of nearly every effort to censor, sue, impeach, and overthrow the president,” citing his role in no less than 180 lawsuits against the current president, and authorship of ten articles of impeachment – which predate the infamous phone conversations with Ukrainian leaders over which Trump was actually impeached.

Beattie noted that Eisen has even written (in the context of overseas coups) about “engineering election fraud scenarios” to “engineer mass protests to question the legitimacy of the target leader.”

Ample evidence suggests that fears about election integrity are very real, from former New York City elections commissioner Alan Schulkin,  a Democrat, admitting in 2016 that vote fraud is widespread; to a New Jersey judge vacating the results of a city council election over charges of election fraud last month; to a former Democrat ballot “fixer” explaining mail-in ballots have been manipulated on a “grand scale” for “decades.”

“Norm Eisen, remember the name,” Carlson agreed, at the end of the interview.