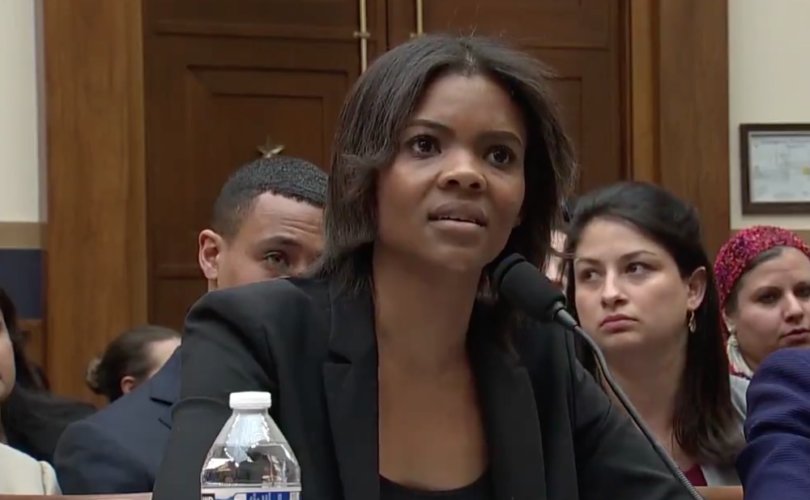 WASHINGTON, D.C., April 10, 2019 (LifeSiteNews) – Sparks flew Tuesday over conservative activist Candace Owens’ appearance before the House Judiciary Committee, during which Democrat lawmakers misrepresented her words on multiple points – one of which had been made just moments earlier in the very same chamber.

Owens, the communications director of college conservative group Turning Point USA, was a Republican-invited witness at a Democrat-led hearing on “Hate Crimes and White Nationalism.” In her opening remarks, she argued the hearing’s true purpose was a “preview of a Democrat 2020 election strategy” about “fear-mongering, power, and control.”

“There isn't a single adult today that in good conscience would make the argument that America is a more racist, more white nationalist society than it was when my grandfather was growing up,” Owens declared. “The biggest scandal in American politics is that Democrats have been conning minorities into the belief that we are perpetual victims, all-but ensuring our failure.”

During his opportunity to speak, Fox News reports that Rep. Ted Lieu (D-CA) turned the conversation to a clip of a December speech Owens gave, for which she was widely criticized earlier this year. “I don’t know Miss Owens, I’m not going to characterize her, I’m going to let her own words talk,” Lieu said, then pulled out his cell phone and played audio of her past remarks.

“I actually don't have any problem with the word 'nationalism,’” Owens said in December. “I think the definition gets poisoned by elites that want globalism. Globalism is what I don't want.  When we say ‘nationalism,’ the first thing people think about — at least in America — is Hitler. You know, he was a national socialist, but if Hitler just wanted to make Germany great and have things run well, okay then, fine. The problem is, he had dreams outside of Germany. He wanted to globalize. He wanted everyone to be German, everyone to be speaking german.”

Owens’ critics accused her of arguing “Hitler just wanted to make Germany great” (disregarding the “if”) and that the Nazi dictator’s only problem was “want[ing] to globalize.” Owens clarified at the time that her actual intent was to refute the idea that Hitler, whom she called a “mass murderer” and a “homicidal, psychotic maniac,” had anything to do with current American usage of the “nationalist” label. Nevertheless, Lieu declared matter-of-factly that the young black conservative was “try[ing] to legitimize Adolf Hitler.”

“I think it’s pretty apparent that Mr. Lieu believes that black people are stupid and will not pursue the full clip in its entirety,” Owens responded. “He purposefully presented an extract, an extracted clip–” She was cut off by New York Democrat Rep. Jerry Nadler, the committee’s chairman, who declared it was “not proper to refer disparagingly to a member of a committee” and “the witness will not do that again.”

“Sure, even though I was called despicable,” Owens quipped, to which Nadler shot back, “the witness may not refer to a member of the committee as stupid.”

“As I said, he is assuming that black people will not go and pursue the full two-hour clip,” she explained. “He’s trying to present as if I was launching a defense of Hitler in Germany when in fact the question that was asked of me was…whether or not I believed in nationalism and that nationalism was bad. And what I responded to, is that I do not believe that we should be characterizing Hitler as a nationalist. He was a homicidal, psychopathic maniac that killed his own people. A nationalist would not kill their own people.”

Owens added that Lieu’s “unbelievably dishonest” attack was “similar to what they do to Donald Trump to create a different narrative,” and “should tell you a lot about where people are today in terms of trying to drum up narratives.”

“By the way, I would like to also add that I work for Prager University, which is run by an Orthodox Jew,” she concluded. “Not a single Democrat showed up to the embassy opening in Jerusalem. I sat on a plane for 18 hours to make sure that I was there. I am deeply offended by the insinuation.”

Prager University, for which Owens hosts a weekly interview show, leapt to her defense, while Lieu doubled down:

.@tedlieu and every media outlet should be ashamed of themselves for mischaracterizing @RealCandaceO as someone who legitimizes Adolf Hitler.

Candace was legitimizing nationalism, not the atrocities inside and outside Germany. https://t.co/J96qQbhJXf

Here is her full statement. She said what she said.https://t.co/WLXq7knARM

What are you talking about? You mean play a video of her own words? Anyone who comes before Congressional committees should be aware of statements they have made in the past. I even gave a heads up by posting her full statement before the hearing occured.  https://t.co/DUpfBBeOc3

Lieu’s defenses consisted primarily of repeating that Owens “said what she said” in the video, but he refused to address the main point that he had misrepresented her words’ meaning as “try[ing] to legitimize Adolf Hitler.”